Injuries and the Transfer Deadline threw the depth chart in to a bit of disarray, so it's time to update the 3XI.

The last two weeks have seen numerous changes to the 3XI setup, in good ways thanks to transfers in, and in bad ways in terms of injuries. So, now it's time to take stock and see what the squad looks like for the next few weeks:

As always, the graphic below is just the player's primary position on the depth chart, so they'll only show up on the graphic once. If they're hurt or suspended for at least most of the next month, then they will not be listed on the graphic. The chart below it has everyone, including those injured, suspended, or away on loan.

Fortunately, the only departure that was of any significant import to the squad was Fabio Borini, though his departure leaves the striker department a little thin. Iago Aspas and the impending return of Luis Suarez help shore things up behind Sturridge, but it still might have been nice to have Borini in case of a couple injuries popping up. Otherwise, it's the injuries that hurt: both fullback spots are both paper-thin right now, and the club will be relying on Sakho to get in to good form quickly in the middle. Hopefully Aspas' horrid performance against United was more of a blip and not an indication of a genuine drop in form that will warrant further lineup shuffling, and least not until Suarez is back from suspension. 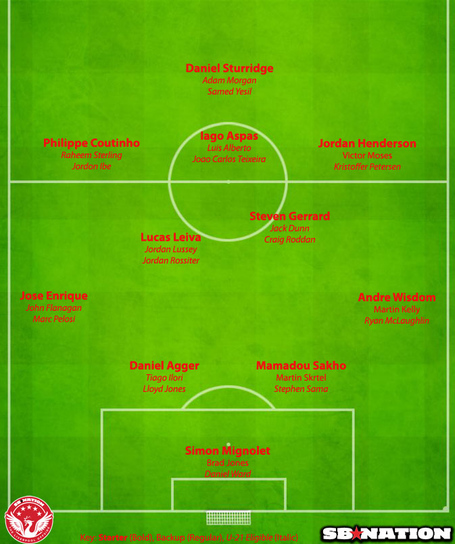