3XI: Eve Of The Season

On the eve of the first game of the season against Stoke, it's time to update our look at Liverpool's depth chart.

Share All sharing options for: 3XI: Eve Of The Season

Things with Liverpool's squad are... not as great as they could be, to be frank. What had looked to be shaping up to be an active transfer window has stalled rather dramatically thanks to several close-but-no-cigar deals, and the first team is looking a bit threadbare as a result. The midfield is thin, the wings are thin, several key players aren't fully fit, and oh god the pessimism is setting in again. Yay.

As much as he's loathed among much of the Liverpool fanbase, Stewart Downing's departure and (at least to this point) lack of having been replaced just yet leaves Liverpool painfully thin on the wings. The likely starter in the right wing currently appears to be Iago Aspas, who's not a natural wide man. The depth out wide relies on two teenagers (Raheem Sterling and Jordon Ibe), an out-of-form striker (Fabio Borini), and one of the bigger disappointments from last season (Oussama Assaidi). Luis Alberto can do a job out wide too, but he appears to be a primary backup at the two further forward central midfield positions.

On top of that, the defensive half of the field is a little papery as well. There's no comfortable backup for Lucas, and the right back depth consists of a hobbled Martin Kelly and kids who either have little to no experience. Andre Wisdom can do fine at right back, but it appears that he's going to be important to the depth in central defense this season as well. At least Aly Cissokho has just been brought in to shore things up on the left.

There's still a couple of weeks left in the window to get more talent in, thankfully. I honestly had hoped that we would have seen more progress since I wrote this last month. At least I can say that the international matches didn't add any injuries to make it worse, right? 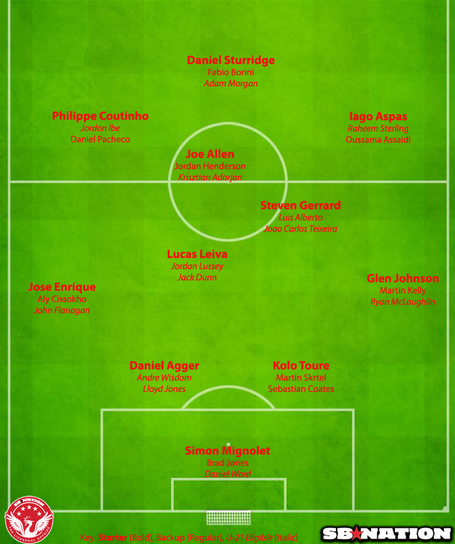