3 XI: A New Way To Look At Liverpool's Depth

There are always questions swirling around what Liverpool's depth chart looks like. Now, there's an answer for that.

Share All sharing options for: 3 XI: A New Way To Look At Liverpool's Depth

Dave Clark periodically runs a feature at his excellent blog Sounder At Heart, looking at the current depth situation in the squad of the Seattle Sounders. Since I joined the staff here, I've toyed with the idea of doing something similar, and with Dave's blessing, I'm bringing the idea to the Liverpool Offside. The basics are this: each position is laid out according roughly to what formation has been used lately, with three players assigned to each spot. Each player will only appear once on the main depth chart at what currently appears to be their "main" position. If there aren't three senior squad players available at that spot, a player from the U21's or academy will be assigned to round out the depth.

Currently suspended or injured players will not appear on the main chart (which is why Luis Suarez doesn't appear on the image below), but will appear on a more generalized table that accompanies the chart. The table is laid out in categories as opposed to specific positions, and players will be listed under every category that he is likely to appear in. 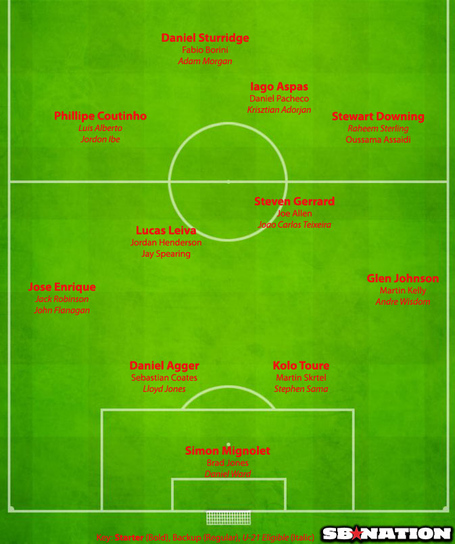 This will be updated shortly before the Stoke match in order to get a sense of how things may have shifted over the remainder of the preseason, as well as account for further arrivals and departures in the squad. From there, it will be updated on approximately a monthly basis.