After spending much of last season playing either the 4-3-3 or 4-4-2 diamond, Brendan Rodgers introduced a pair of new formations and tactical approaches last night. Let's take a look.

Along with another chance to marvel at how good a player Raheem Sterling is fast becoming, last night's pre-season friendly gave us two new formations from Rodgers' Liverpool, with distinct tweaks on what was seen last season. Formations, though, rather than being important in themselves, mostly serve as shorthand for what the players are being asked to do, so let's take a closer look at some of the things we saw last night—things we haven't often seen from a Brendan Rodgers side. 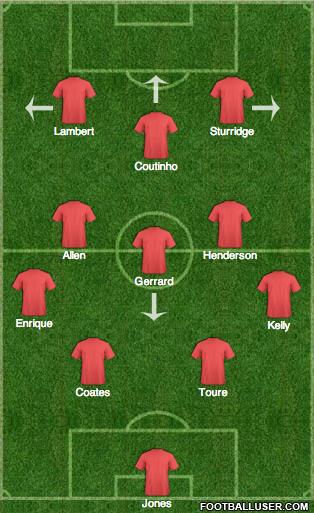 At first glance, the 4-3-1-2 doesn't seem all that different from the 4-4-2 diamond. The difference is that in the diamond—which Liverpool used quite often last season—the tip of the diamond is a member of a midfield that operates as a distinct four-man unit. Here things are a little less clear cut, with the central player pushing on to operate as a support striker. Less involved in buildup play and defence, the central player in the 4-3-1-2 is as much forward as midfielder.

Last night it was Coutinho taking on the role. When Liverpool had the ball in midfield and were building play, Coutinho mostly stayed high up the pitch while the three midfielders behind him operated as a unit—much like a three-man midfield in the 4-3-3 would, a formation Liverpool also used often last season. To make room for him, the two strikers regularly pushed far wider than they would have in the 4-4-2 diamond seen last season.

This led to stretches where Sturridge and Lambert both drifted wide enough that it almost appeared a 4-3-3 with Coutinho playing in the middle as a false nine, though these moments were rare. The two strikers did have more defensive duties than they would in the 4-4-2 diamond, though, with one of the attacking trio always needing to track back. This led to Lambert occasionally filling in as a left midfielder without the ball, Sturridge filling in on the right, or Coutinho dropping centrally.

And to be honest, none of the attacking players looked wholly comfortable with it, particularly Sturridge and Coutinho. Still, it's a new tactical tweak to look forward to given one wouldn't expect to see an entirely new tactical approach deployed as a one-off in a friendly. Also of note was the degree to which Gerrard dropped into the backline in this formation while the fullbacks pushed on. 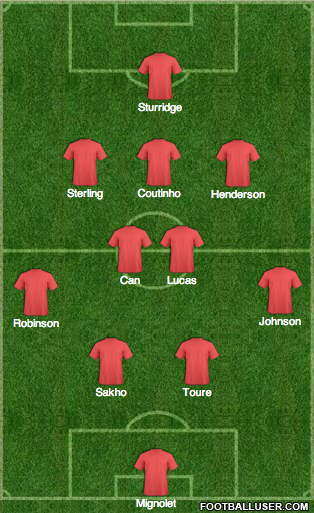 Most Liverpool fans will be familiar with the 4-2-3-1 given it was Rafa Benitez' favoured formation. With Gerrard moved into the single-pivot last season and needing of a pair of willing runners to do the work on either side of him, few will have expected to see it back. Last night, though, we may have been given a hint of Rodgers' Plan B for when Gerrard is out either because he needs a rest or due to injury. And that Plan B was the double pivot.

Gerrard came off, Lucas came on, and immediately the formation shifted, with Emre Can dropping back to play alongside Liverpool's veteran Brazilian. Ahead of them, Henderson, Coutinho, and Sterling swapped frequntly in the band of three, supporting Sturridge from narrow positions while he took on his favoured role as lone advanced forward. It's hardly an unusual formation, but it's somewhat unexpected to Rodgers' Liverpool deploying it.

As with the 4-3-1-2 in the first half, it's also hard not to see a hint of things to come here. Liverpool face a return to Europe and will compete in four competitions, and there will be times—perhaps even entire matches—where even a fit Gerrard may not see the pitch. A Can-Lucas double-pivot may be what we see on those occasions. And it could mean that despite rumours linking him to Napoli earlier this summer, Lucas still has a significant role to play for the club.