How Will Liverpool Line Up in 2015-16? Pre-Season Tactics Hint at a Christmas Tree

Despite talk of the 4-3-3 likely being Liverpool’s go-to formation, pre-season tactics have hinted at the 4-3-2-1 Christmas Tree being Brendan Rodgers’ choice heading into the new season.

Share All sharing options for: How Will Liverpool Line Up in 2015-16? Pre-Season Tactics Hint at a Christmas Tree

With another season nearly upon us and a slew of new signings to integrate into what is looking the strongest, deepest Liverpool squad in recent memory, fans have begun to speculate as to how Brendan Rodgers is likely to line his side up. Daniel Sturridge is still hoping to be fit by late September, which could chance things in the autumn, but what has been seen so far in pre-season is hinting strongly towards the 4-3-2-1. 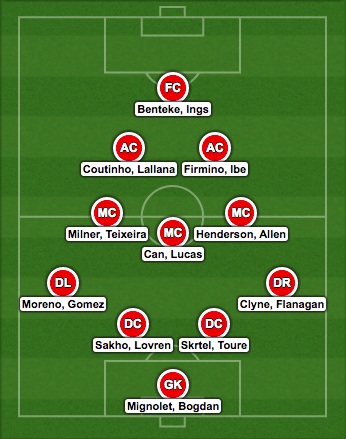 In the 4-3-2-1 seen in pre-season, three central midfielders share duties while the attacking players support the striker centrally and provide a direct goal threat, often with one in a traditional ten role and the other given freedom of the final third. A narrow formation, almost wholly reliant on the fullbacks to provide width.

Often nicknamed the Christmas Tree, it last saw regular usage in England’s top flight with Tottenham in the 90s. More recently, Carlo Ancelotti used it as a way to get all of his impressive attacking pieces onto the pitch at the same time at AC Milan. In any case, having four defenders, three midfielders, and three players in the attacking band means it shares some common ground with the 4-3-3—and many will be tempted to mislabel it as such.

However, unlike the 4-3-3, the players supporting the striker in the 4-3-2-1 are primarily asked to support from central positions and to themselves provide a direct goal threat. This has been clearly on display so far during Liverpool’s pre-season games, particularly against Adelaide and Malaysia, where Adam Lallana and Jordon Ibe took up inside positions as often as possible and rarely sought to stretch the pitch to the outside.

In some ways, it’s a continuation of the tactics Rodgers fell into last season. Liverpool’s campaign was nearly salvaged by moving the attacking midfielders inside as part of the shift to the 3-4-2-1, and Coutinho and Lallana regularly spoke of how it was a move that improved their game and was best suited to their talents. Going to a four-man backline this season doesn’t change that Liverpool’s best creative players are at their best centrally. 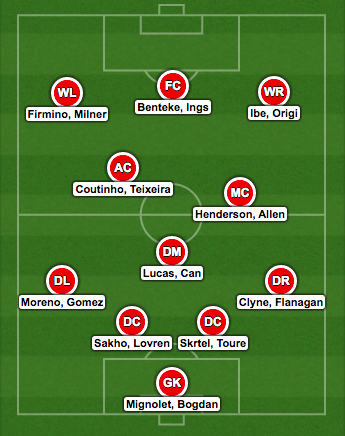 Shifting to the 4-3-3 may still be a common tactic, but it would either mean playing the likes of Coutinho and Lallana wide where they are less effective or moving one of them into midfield, likely displacing Milner. With a more attacking player in a midfield role, a dedicated holding player is necessary.

New £29M attacking midfield signing Roberto Firmino is also best in those more central areas, where he can link up with the striker or push past to provide a direct goal threat. In fact, of Liverpool’s four best attacking support players—Coutinho, Firmino, Lallana, and Ibe—only Ibe is inclined to stretch defences wide. And against Adelaide in particular, it was obvious he had been asked to play centrally as much as possible.

Another common point of separation for the 4-3-2-1 is that often it doesn’t use a designated holding midfielder, instead asking the three in the middle to play as a fluid, interchanging unit. In pre-season, whether it’s been Allen or Lucas nominally in the middle of three central midfielders, there has been far more positional rotation than was seen last year, with both Henderson and Milner taking frequent turns anchoring the side.

This fluidity opens the door to Rodgers starting Emre Can in the middle of the three, which many expect he intends to do this season. Can remains suspect as a screening player—he was embarrassed in that role for the German U21s at this summer’s European Championships—a role that also limits his freedom to push up the pitch. A midfield with three shuttlers sharing duties equally, though, could suit him far better. 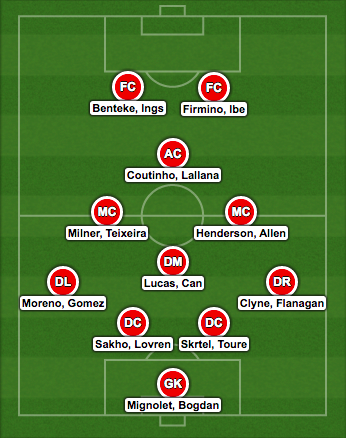 When Sturridge returns, the 4-4-2 Diamond could become Rodgers' go-to formation as it was when Luis Suarez was at the club, but even before then it could be useful, with either Ings coming on for a midfield player or Firmino pushing up to join Benteke.

Of course, the downside to asking multiple players to swap roles constantly and share responsibility fluidly is an increased chance mistakes will be made in coverage. This is doubly the case due to the demands the formation places on its fullbacks to cover their entire flanks with little dedicated support. With Nathaniel Clyne joining Alberto Moreno this summer, though, those fullbacks should at least have the legs for the job.

The 4-3-2-1 can be a very difficult formation. It’s narrow and demands a near telepathic understanding between players or it risks ending in lots and lots of goals against. Yet it does seem to suit Liverpool’s available talent. It highlights the importance of signing a pacy, tireless fullback like Clyne and a hard-working, intelligent veteran like Milner. If it works, it gets Can on the pitch without asking him to become a dedicated screening player

It also, perhaps most importantly, puts Coutinho, Firmino, and Lallana in more central areas during the buildup and attacking phases, something that was key to what success Liverpool did have last season. Once Daniel Sturridge is fit—if he can stay fit—it could all change, but for now, what has been seen from Liverpool so far during pre-season suggests Rodgers is building this season’s side around the 4-3-2-1 Christmas Tree.