Hello All. I wrote this essay that is in the running for "niche idea of the year," combining two of my loves: Liverpool FC and Birds. It was fun to contemplate and write, and I hope you enjoy the spirit of it! Thanks.

Recently on The Guardian Football Weekly podcast, Jonathan Wilson, (world) football journalist, tactics savant and historian, and TV detective super-fan, took a question from a listener asking for Wilson’s Best 11 Side (starting lineup) composed of TV detectives. It was the perfect setup for a man who does not know how to respond in half-measures to serious or trivial hypotheticals, leading to a wonderful piece of audio. And it got me thinking…

What would be my Best 11 Side for Birds?

This is a very serious hypothetical. No half-measures here.

To construct a Best 11 Side for Birds, some background must be established. I am a huge Liverpool FC supporter. I love the team, its values, its history. As an American with no anchor in England, I had no affiliation to any club and was a free agent fan. Over 10 years ago, I chose Liverpool, but when I think about my relationship to the club, it really feels like Liverpool chose me. Cue the groaning from rival supporters.

Embraced by the teutonic bear hug of their manager, Jurgen Klopp, Liverpool FC have reestablished themselves as a force in England and Europe, winning the UEFA Champions League and English Premier League in successive seasons, while nearly setting new points records. Klopp favors tactics that compel his players to aggressively press and pursue when the opposition is in possession so Liverpool can win the ball back quickly and attack in numbers. In German this is known as "gengenpress" (counter-press), self-described by Klopp as "heavy metal football." Are you not entertained?

Naturally, when faced with the (very serious) task of coming up with my Best 11 Side for Birds, I will adopt the playing style and formation of my beloved Liverpool FC. This will be a high-pressing 4-3-3, with bombarding fullbacks and engine room midfielders. The centerbacks must be fast and skillful with the ball at their feet. The center forward will be more of the "false 9" variety, dropping off to bring the wingers into play, defending, and linking defense to offense.

But what of the birds? There are 10,000 species of birds worldwide. While my scouting ability is formidable, this is far too many species to be able to adequately assess for my first team. Thus, I will limit the birds to those found in my home state of California. I have scouted them, I know their attributes, and I can speak to their abilities to fit into this system.

California Birds FC, play in front of sold out crowds at the Bird’s Nest Stadium in Sacramento, the state capital of California. The fans are passionate about football and birds, and in dawn chorus sing "You’ll Never Flock Alone" in solidarity with the players, their club, and their state. Here is California Birds FC:

One of the only birds endemic to California, the Yellow-billed Magpie (Pica nuttalli) would die for the shirt. His conviction and passion for his home state is ever present on the sidelines, strutting and calling to his players. Highly social, flocking birds, Magpies, like all Corvids, compel us to reassess the pejorative "bird-brained." In addition to being the emotional leader of the flock, this creative, smart bird is a problem-solving expert, always putting California Birds FC in the best position to win the match.

Among their attributes, a goalkeeper must have a large wingspan. No California bird’s wingspan is larger than the near 10 feet, wingtip to wingtip, of the California Condor (Gymnogyps californianus). Wings outstretched, this vulture will cover almost half of the width of the goal and will block every strike in sight. On set piece deliveries, our keeper is unafraid to mix it up with the opposition and won’t take no guff. Attempt saved, the Condor will use its keen eyesight and smarts to intelligently distribute the ball to its teammates, turning defense into offense.

English football pundits like to compare world-class centerbacks that do everything well, with effortless elegance, to a Rolls Royce. True to form, the Sandhill Crane (Antigone canadensis) is tall, elegant, effortless in flight, and highly vocal, making it one of the most striking birds in California. These 3+ foot tall birds are also known for their breeding season leaping displays - surely they will win every aerial dual. Constantly communicating with their flock, the Sandhill Crane will organize the defensive shape and ensure that any opposition attack is a failed attack.

Though not as physically imposing, the Killdeer (Charadrius vociferus) relies on defensive nous, complimenting the Sandhill Crane in defense. Heard before seen (check out its scientific name), the onomatopoeia-ic Killdeer knows how to communicate with its flock. But it is its defensive instincts that get this bird into the starting lineup. Killdeers nest on the ground in open areas. When a predator approaches the nest site, Killdeers move away from the (well-camouflaged) nest and fake injury to defend their nest. This remarkably successful defensive strategy involves extending wings and tail feathers to mimic a broken wing or damage to the lower back. One study concluded that 1,012 of 1,017 displays were successful at dispelling predators. We will take those kinds of odds in this defense.

California Birds FC playing style requires fullbacks with boundless energy, getting up and down the pitch with ease and grace. Few birds can match the tireless movement of the Wilson’s Warbler (Cardellina pusilla), a bright sprite of a bird that flits among the branches in search of small insects. It is easy to imagine the Wilson’s Warbler harassing the opposing winger, winning the ball, bombing up the pitch, and assisting a teammate for a goal.

Across the width of the pitch is Wilson’s Warbler partner-in-crime, the White-throated Swift (Aeronautes saxatalis). Swift species are indefatigable. They are unique among birds in that their foot morphology does not allow them to perch horizontally. When they return to their roosting sites for the evening, Swifts hang vertically and sleep until morning. They do not rest all day long, buoyantly on the wing from wake to sleep. This is a high-energy, vocal bird that is always on the move, elegantly circling in groups of other Swifts.

There are many types of defensive midfielders with local names ascribed throughout the world. California Birds FC play with a tall, rangey bird that is not afraid to snap into a tackle - the Great Blue Heron (Ardea herodias). This long-legged, long-necked bird will be able to cover for its defense by using its long limbs to intercept anything in its vicinity and strike with lightning speed when a last-ditch tackle is called for.

Being in the center of the action, good midfielders are often described as having their "head on a swivel" to continuously heed threats and opportunities from all sides. "Head on a swivel" describes no bird better than owls. The large and imposing Great Grey Owl (Strix nebulosa) is California Birds FC’s always-aware link between defense and offense. And possessing steathy, silent flight, this hunter has the unique ability to time late runs into the box, providing a goal-scoring threat.

A natural-born midfielder, with offensive and defensive attributes. Hardworking, resourceful, and intelligent, the California Scrub Jay (Aphelocoma californica) is known to cache thousands of acorns per season in the soil and be able to recall the location of a remarkably high percentage many months later. They will even re-cache acorns when they know a rival has watched an initial caching. Tactically astute, our Jay will always know where its fellow birds - and the opposition - are at all times. Whatmore, the Scrub Jay may be the best all around athlete on the pitch - their acrobatic flying and hopping allows a bird of their size to navigate dense understory shrubs with ease. These birds are fiercely loyal, staying with and constantly communicating with their mate year-round. A true leader on the pitch, this is the Captain of California Birds FC.

Leading the line and the counter-press is the Acorn Woodpecker (Melanerpes formicivorus). Resourceful and hardworking, this woodpecker excavates the soft wood of a "granary" tree" to cache acorns for later consumption. Possessing a skull evolved to protect against brain damage despite repeated blows from carving holes in wood, the Acorn Woodpecker is a thunderous header of the ball, turning crosses into goals. These birds are uniquely communal, living in loyal multi-generational family groups to help rear new offspring. And they are wonderfully varied communicators, relying on a variety of calls, wing displays, and "drumming" to communicate with their flock and defend their granary trees. A true team player, he will defend from the front, and offensive moves will flow through him as he brings his wingers into play.

The most diminutive player on the pitch, the Rufous Hummingbird’s (Selasphorus rufus) size is inversely proportional to its feistiness. A tireless defender of its territory, this Hummer is always trying to get to the goal (flowers or feeders) and keep others away from its prize. With its rufous back and tail and iridescent orange throat, it does not just look the part, but is a true artist with the ball, using its unique wing structure to stop on a dime and change direction, hover, and even fly backwards. This is the most creative player on California Birds FC, doing things that others only dream of.

Some wingers are artists. This winger is a bolt of lightning. The Peregrine Falcon (Falco peregrinus) is the fastest animal, reaching speeds of 200 mph during predatory dives ("stoop"). California Birds FC’s top scorer, defenders will quake at the speed threat from this Falcon. Using its speed one-on-one or on the end of long balls over the top of the defense, the Peregrine Falcon is the goal-scoring threat that forces other teams to toss out their plans and scramble to contain his ferocity. 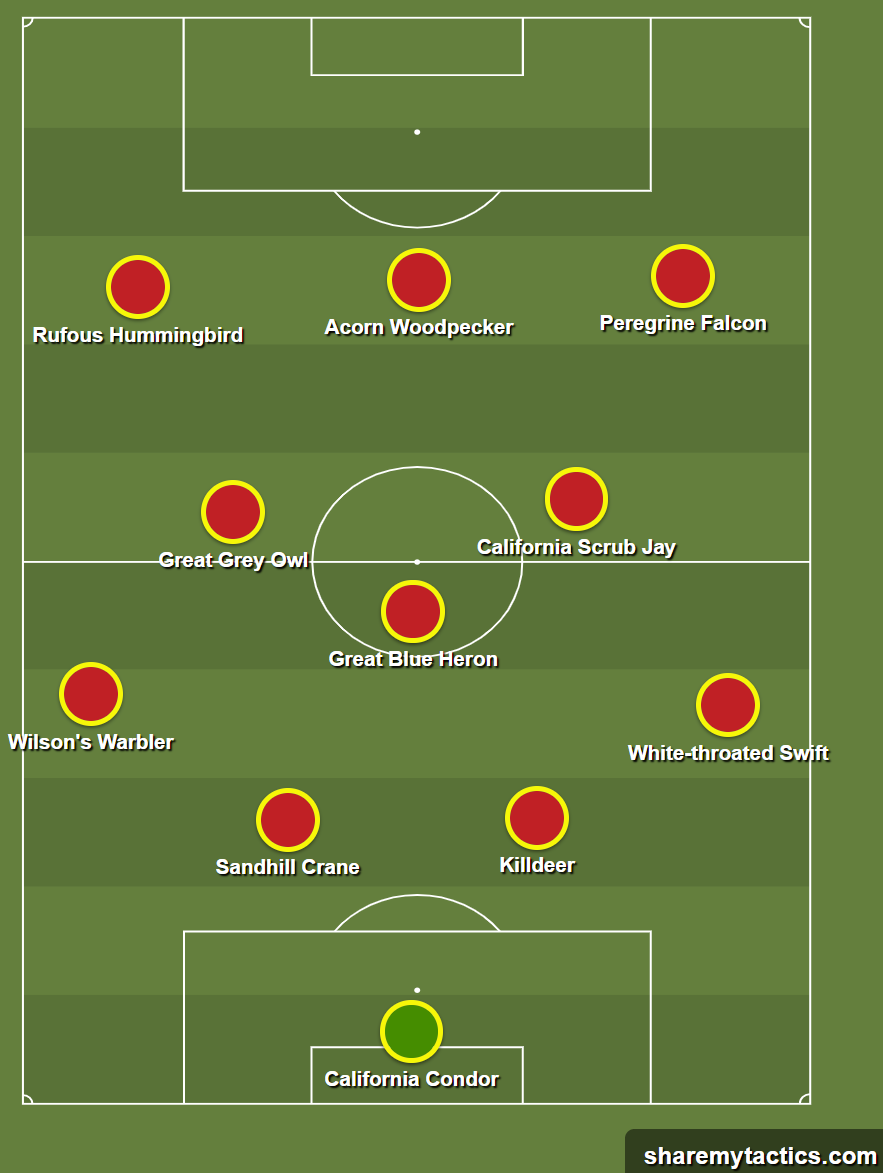