In a poll of Premier League allegiances, Liverpool have been named the third most disliked club in England, which perhaps isn’t that surprising once you start to pick it apart.

Share All sharing options for: Liverpool England’s Third Most Disliked Club After Chelsea and Manchester United

If other fans disliking your club is a sign of relevance, Liverpool standing third-worst amongst Premier League sides suggests that despite a lack of success on the pitch, a lot of people remain focused on the Reds. In fact, only Chelsea and Manchester United are less popular amongst fans of other clubs in the "League of Love and Hate" compiled by data firm Trinity Mirror.

It perhaps shouldn’t be that surprising. Of the sides expected to end up in the top half of the table this and most years, Arsenal have always managed to sell themselves as the inoffensive options—the side fans of every other top half club bar Tottenham would like to see do well if theirs struggles. Manchester City, meanwhile, have largely failed to use their massive influx of oil money effectively enough to engender true hatred.

Then there’s Tottenham Hotspur, who remain mildly annoying outsiders in the global football consciousness despite their best efforts to achieve relevance, and a string of underdogs hated by few who aren’t direct rivals—the likes of Southampton and Swansea and Everton. Liverpool, then, were always likely to end up disliked, something that speaks to their continuing relevance off the pitch even while they struggle on it.

Chelsea, who have done what City so far have not and used their oil money competently to establish themselves as England’s dominant side in the current footballing landscape, and Manchester United being the two least liked sides in the Premier League is similarly unsurprising. At the other end, too, it perhaps shouldn’t be surprising that Southampton have managed to end up the league’s most liked club.

Relative newcomers who have played a pleasing brand of football and survived the poaching of talent from the likes of Liverpool, Tottenham, and Manchester United while remaining top half favourites makes sense of their place. Swansea, in third, are up there for similar reasons. The same could be said of newly promoted Bournemouth, who excited fans on their way to winning the Championship and promotion last year.

Arsenal, unsurprisingly, are the top ranked title contender, coming ninth, though Everton in fourth will raise the eyebrows of Liverpool fans, who also likely voted Crystal Palace far lower than fans league-wide. Stoke City being the lowest ranked side not likely to challenge for the Champions League places, though, will surely get most Reds fans nodding along. 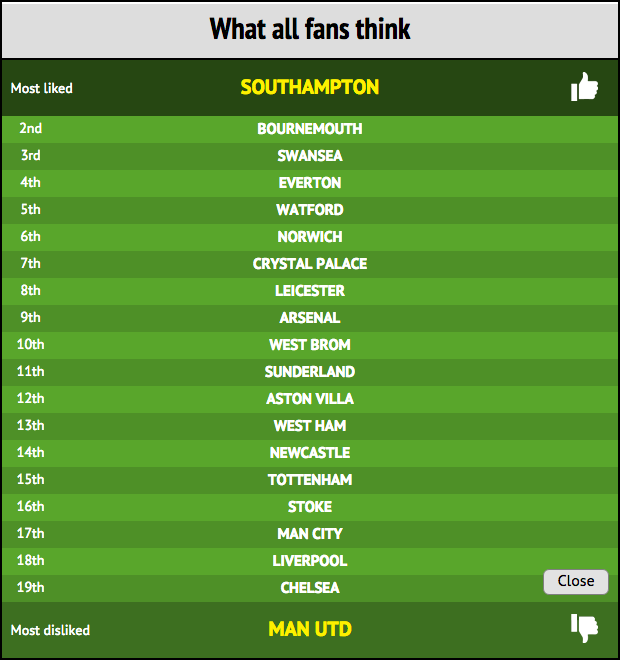