Over the 2014-15 season, Liverpool Offside readers ranked the team's performances after every match. Philippe Coutinho ran away with Player of the Season honours, but there’s more to look back on than just that.

Share All sharing options for: Liverpool’s Best and Worst of the Season as Chosen by TLO Readers

When voting wrapped up late last week, it was no surprise Liverpool Offside readers chose Philippe Coutinho as the club’s player of the season. After a year in which he was named player of the month on three occasions and earned nearly twice as many points match to match and month to month as his nearest competitor, the vote was always likely to turn out more coronation than contest.

Where things were more interesting was in the race for who would finish where behind him. In the end, Simon Mignolet’s strong second half of the season was just enough to edge him ahead of the consistent Martin Skrtel for second, while Jordan Henderson wasn’t far behind either in third. Mignolet was named player of the month twice while Skrtel and Henderson never won it. Behind them, Emre Can finished fourth and Sakho fifth

Mignolet’s second half resurgence won the day and sees him first runner-up to Coutinho, but the reliably steady performances of Skrtel and Henderson meant they placed ahead of not only Can and Sakho, but also players like Lucas Leiva, Adam Lallana, and Raheem Sterling—all of whom won player of the month once last season but also had their fair share of disappointing stretches without ever quite hitting the heights Mignolet did.

Thanks to Liverpool Offside reader Meru S., though, who has been feeding the results into the R Project all season as a training dataset for the free, open source statistical language, we can dig a little bit deeper than that.

Liverpool’s Man of the Match—and Their Worst

Coutinho won player of the season, and looking at the vote week to week it’s clear it wasn’t even close. That’s because he was named man of the match on ten occasions and never ended up on the wrong end of the rankings. Simon Mingolet’s strong second half saw him get close to Coutinho with nine man of the match awards, but he was voted Liverpool’s worst on four occasions, speaking to just how uneven his season was.

At the other end, it’s a three way race between Dejan Lovren, Daniel Sturridge, and Glen Johnson, who were voted Liverpool’s worst player on the pitch on seven, six, and six occasions respectively without being ever voted man of the match. Sturridge is likely there due to fitness issues and the questionable handling of his return(s) from injury. There are no such excuses to be found for Lovren and Johnson. 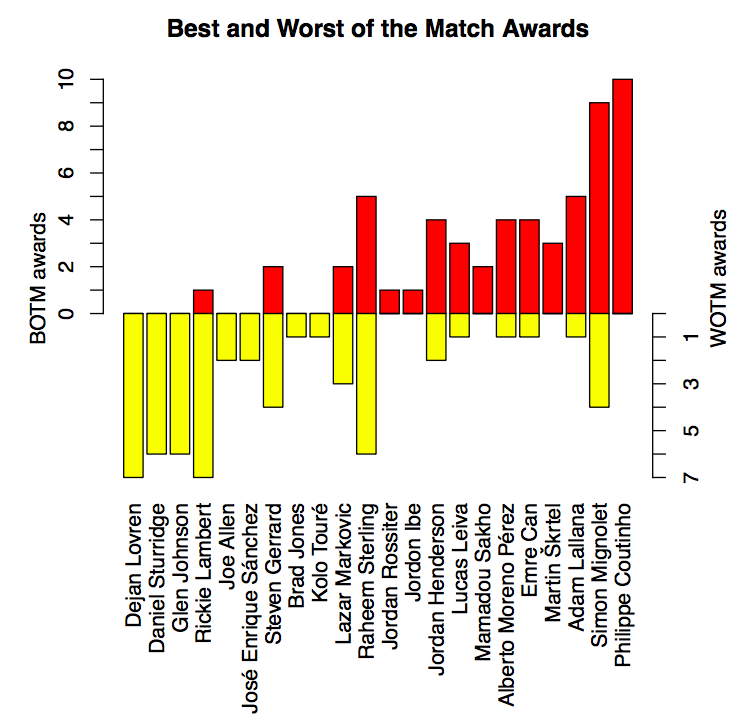 Liverpool’s Best and Worst Individual Performances of the Season

For the top five performances of the season, it seems only fitting that Liverpool’s player of the season takes top honours, and Philippe Coutinho earned a 99.2% positive rating for his performance against Manchester City in March that for a time made it seem Liverpool really could end the year in the top four. He also claimed second with a 99.0% rating following April’s 2-0 victory over Newcastle.

Meanwhile, Lazar Markovic is a surprise with the third best rating, a 98.8% positive at Sunderland in January. Simon Mignolet was fourth with 98.4% for his shutout in the replay against Blackburn in the FA Cup, and Jordan Henderson fifth with a 98.1% against Burnley in March. Jordon Ibe deserves an honourable mention for just missing the cut with his first leg performance against Besiktas, where he scored 98.0% positive.

On the other side of the ledger, nobody had a worse ranking in 2014-15 than Daniel Sturridge, who got a 4.1% positive rating in the second leg against Besiktas. Glen Johnson’s 5.3% against Manchester City last August, Kolo Toure’s 6.4% in the crushing spring defeat to Arsenal, Steven Gerrard’s 6.6% for his thirty-second red card against Manchester United, and Rickie Lambert’s 7.2% against Basel at Anfield round out the worst five.

One interesting note, though, is that despite not being a strong contender for player of the season, not having one of the top performances, and only being named man of the match twice, no Liverpool player earned a higher average rating across the season than Mamadou Sakho. Whether one looks at the totals or adjusts to compensate for skew based on result, Sakho was Liverpool's highest rated player on average. Conversely, none was rated worse on average than Glen Johnson. 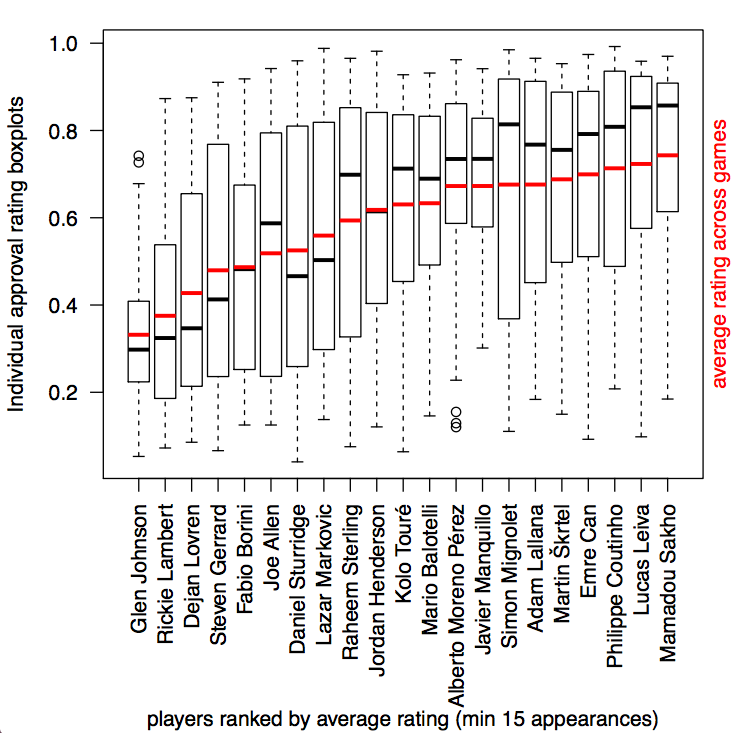 Liverpool’s Best and Worst Team Performances of the Season

According to Liverpool Offside readers, the best performance of last season—or at least the best rated one—was against Chelsea in the first leg of the League Cup semi-final on January 20th, when Liverpool’s players collectively earned an 88.9% approval rating. Against West Ham a few weeks later on the 31st, they got 88.4% for a 2-0 home win as they rebounded well from defeat on penalties in the second leg of the Chelsea semi-final.

A 2-0 league victory at home over Burnley on March 4th saw an 83.9% positive rating, while a 4-1 win over Swansea at Anfield in late December and 0-2 victory away to Aston Villa in January both saw the team earn an 81.8% rating. March’s 2-1 victory over Manchester City was the only other match that saw the team collectively break the 80% barrier, with Liverpool scoring 80.6% in that match.

On the other end, it’s no surprise the season finale against Stoke earned the lowest team rating of 2014-15, a collective 3.0% positive rating. The hammering at the hands of Arsenal in April got a 3.5%, while a 1-0 loss at Newcastle in November earned 3.6%. The 3-0 loss to Manchester United on the road in December and loss at Basel in October round out the worst five with a 4.1% positive rating overall.

Liverpool’s Most and Least Improved

Some players had ups and downs, but nobody had an up quite like Simon Mignolet. Voting for the Belgian shot stopper skyrocketed following back to back shutouts on the road at Sunderland and Aston Villa in January. From that point until the end of the season, Mingolet saw a 39-point improvement to his average rating. That swing took him from one of the worst to runner up for player of the season, and it's an improvement that cannot be overstated. 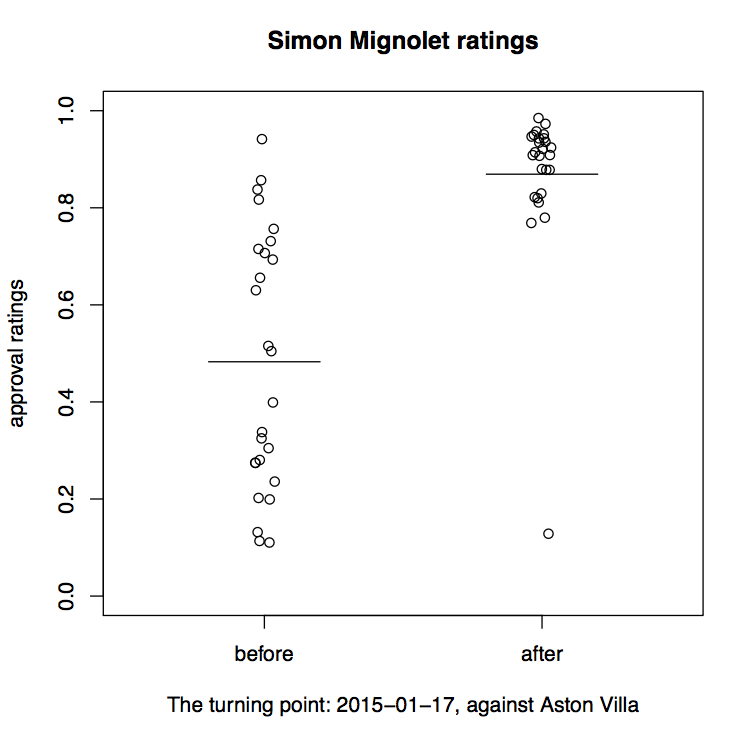 Others saw their stock up over December and January as Liverpool turned the season around, but none came close to Mignolet. On the negative end, Raheem Sterling and Emre Can stand out. Sterling saw his stock drop 36 points on average in March following his declaration he wanted to focus on football. Can’s vote fell by 32 points around the same time, with the player increasingly played out of position and looking exhausted.

Some of the results are hardly a surprise, but it’s always illuminating to look a little deeper—to find things like that readers voted Chelsea in the first leg of the League Cup semi-final the best team performance of the year, or that Daniel Sturridge rather surprisingly earned the lowest individual ranking. Or to find out that Liverpool Offside readers really, really like Mamadou Sakho. Which probably isn’t a surprise, really.

Again, we would like to thank Meru for keeping track of the numbers all season as he ran them through the R Project and passing along both the results and some snazzy charts, and we would encourage anyone looking for an open source, multi-platform software environment for statistical computing to give R a look.