What happens when you simulate the rest of the season 10,000 times using the latest standings and team form? You gets lots of data, that's what!

A few folks out there in the internet project a team's chances of top 4, relegation and everything in between. I decided to take a stab at it too. Here's what I did...

Methodology (you can skip this part unless you need help sleeping)

For each team in the BPL, take each of their last four games, both home and away. We'll call that their "home form" and "away form."

For each form type (home and away), calculate their average goals for and against as well as the standard deviation for those average goals.

For each upcoming game, take the home team's average goals scored and add or subtract a random number (generated on a normal distribution) using the standard deviation.

Next, do the same for their opponent's average goals conceded.

Do this for every team and every match for the rest of the season, and then do each season 10,000 times.

So, take the averages and add random number that falls within the standard deviation:

But how many will Southampton score?

Now all we need to do is repeat this for every other match for the rest of the season and then for 10,000 seasons! I'm gonna need a lot of paper....

OK, so things don't look so good for Liverpool. The next game is very important...

If Liverpool wins our chances of top 4 climbs to 22.7%

A loss all but spells doom with a 6% chance of reaching the top four.

So, according to this, where will Liverpool finish?

If you go by the "mode", Liverpool will finish 7th. The average finishing position is closer to 6th.

Liverpool need a victory versus Southampton to be seriously considered for a top 4 finish. Anything less will likely require a minor miracle if we are to get a CL qualification by BPL league position.

EDIT - New chart showing probabilities based on points earned in the next four matches: 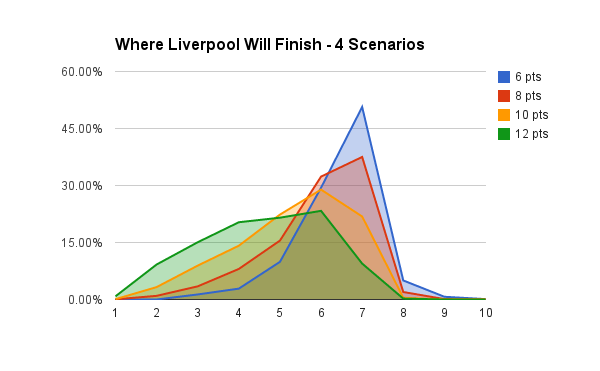