We have followed along breathlessly as Ian Ayre and Brendan Rodgers delivered a fantastic window to strengthen the first team, but what moves happened under the radar this year to strengthen the youth ranks? Right now is a great time to look back with the addition of Madger Antonio from Villarreal this week, so I have a recap here to review the LFC youth signings and trialists of 2014, roughly organized from youngest to … least youngest.

An early boyhood Manchester United fan signs for LFC, a seemingly not too unusual based on the number of former ManU youths in the current Liverpool youth teams. His position isn’t specified in this article, but apparently he is good with the ball at his feet and plans to score goals against his former favorite club, so perhaps he is a midfielder or forward. I can’t wait to see how he has progressed when he signs his first professional contract in 2023. I'm old.

A Serbian youth standout (no known relation to Lazar) that came on trial with the club in February, it has been rumored that LFC have reached an agreement to bring him into the club when he reaches 16 years old. Already 5’ 9" tall at 13, he seems like a *huge* prospect. See this post for a more detailed scouting report on the youngster. Here is a picture of the boy with Steven Gerrard when he was on trial: 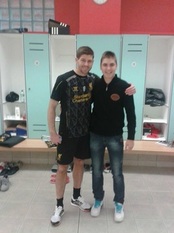 And if you like fairly low quality video of Serbian youth football, here are some highlights from his most recent season posted in July.

The 14 year old striker signed a pre-contract with LFC after some notable discussions – first on trial with Manchester United and talks with Alex Ferguson, then with Brendan Rodgers. Like with Luka Markovic, he will join the club full time when he turns 16. In the interim, he will make periodic visits to Liverpool to keep up with the training program put together for the Kirkby lads. For more details on the Irish prospect, read the original article in the Irish Examiner.

I know next to nothing about this 15 year old player for Levksi Sofia other than he apparently scored the winner against Lazio in a May friendly (video highlight in the link, fast forward to the 3:43 mark to see his goal). In August he came on trial with Liverpool with the U16 squad, and even scored a goal for the Reds in a friendly match. Bulgarian TV did a video interview with him after he returned to Bulgaria on August 17th, but there is no transcript so I have no idea what he said. Could any resident Bulgarians give it a listen to share what was said?

Since the LFC trial ended, his management group (I think that's what it is) is reporting interest from other clubs, including Manchester City, so perhaps there won’t be an offer forthcoming from Liverpool.

#StanislavIvanov recent trialist at Liverpool FC is on the radar of 2 La Liga sides. ST and Levski Sofia are keen to find the right option.

#StanislavIvanov is also on the radar of PL side Manchester City. Scouting Team have been contacted about the status of the player.

A Liverpool fan since he was a tot, Jake Brimmer signed a 3 year deal to fulfill his dream and join Liverpool once he turned 16 in May. The talented Aussie was spotted during the Summer 2013 tour of Australia by lead scout Barry Hunter; Brendan Rodgers coyly alluded to unearthing the gem of a prospect at the time, but he refused to disclose his identity to ensure the deal was not disrupted by a third party. Now at Liverpool, and with his family making the move with him from down under, let’s see how he performs for the U18s this season.

Ovie was a member of Arsenal’s youth academy since the tender age of 9, but looked to move on when the London club reportedly did not extend him a scholarship offer. Liverpool offered him a trial and the experience must have been enough to convince him to join over offers from competing big clubs Manchester United, Manchester City, and Chelsea. His official LFC profile says he will join the U18 squad, where he can link up with fellow Anglo-Nigerian youth Sheyi Ojo. Hopefully he develops into a player that Arsenal regret letting slip through their fingers. Here are some highlights of the LFC squad from the Aegon Future Cup where Ovie participated as a trialist wearing number 4.

The Manchester native signed a two year scholarship deal with Liverpool this summer after spending the previous 11 years in the Manchester United academy. Based on my calculations that means he was a Manc since the wee age of 5, so this decision must not have come lightly. His official LFC profile states he can play in central midfield or as an attacker, and "is a talented player who is capable of scoring goals" so hopefully he is able to produce a good scoring record for the U18s this season.

I haven’t seen any articles describing Kane’s background or how he wound up at Liverpool, but his official profile notes he did indeed arrive this summer from Brentford and is a central defender. We’ll see how he develops with the U18s this year.

Conor is a left back who signed back in 2012, but his profile page notes he only joined the club in July, probably due to not having turned 16 until this past winter. He comes from a family of diehard Reds, so hopefully he makes an impact on the club and cracks the first team in the future.

Mathias, a wide forward, claims LFC first scouted him at a 2013 U15 tournament in Bolivia and tried to make a move for him in March, but he wasn’t able to make the trip. Over the summer Liverpool approached his club again and setup the trial for August. He has appeared for the senior team of his current club, Universidad de Chile, and he is full of confidence, stating before the trial "I will show that we South Americans are the best players."

A conclusive outcome of the trial has not been reported in the English-speaking press, but a Google-translated Chilean source says he played in two friendly matches, scoring a goal in one against the Rotherham United U18s and playing in a match against the Fleetwood Town senior squad. This article says he has already returned to Chile, but the author is optimistic that Pinto’s performance on trial will bring a permanent offer from LFC soon. If someone with a good grasp of Spanish wants to add any further details that got garbled by Google, I would appreciate it.

Liverpool’s only deadline day signing of the summer window, Madger has already joined his youth squad teammates at Liverpool despite his transfer still being in process to gain international clearance. For more information, see the coverage here on TLO.

Ohana is an attacking midfielder currently in the Israeli Premier league, and last month scored 4 goals for his national team in the U19 Euro championship. He apparently had a trial at the end of August with Liverpool. The midfielder participated in the same Fleetwood Town friendly as Mathias Pinto, according to the Universidad de Chile official site, but I haven’t seen any other reports on how he performed. One source on Israeli football speculates that Ohana would have difficulty obtaining a work permit, so even if offered a contract after the trial, it might be a while before he is able to join up with the club in Liverpool. It will be interesting to see if any additional reports on his trial pop up in the next week or two with more details.