Liverpool fans waiting to find out who the club would kick off against in Group B haven't had to wait long to find out the answer: PFC Ludogorets at Anfield on the 16th of September.

Liverpool were relatively fortunate to land in Group B along with headliners Real Madrid, Switzerland's FC Basel, and PFC Ludogorets of Bulgaria. The good news continued today when UEFA released the group stage schedule and the club learned that they would kick things off on Tuesday, September 16th by welcoming Ludogorets to Anfield.

The RomanianBulgarian champions made it to the group stages of the Champions League for the first time by defeating Steaua Bucuresti on penalties this week, with a centre half filling in for their goalkeeper in the shootout after an 118th minute red card. They're a side that will head to Anfield with nothing to lose, but that shouldn't make a difference.

Liverpool follow it up by traveling to face Basel on Wednesday, October 1st before facing off against Madrid in the third and fourth group stage games—at home on October 22nd and at the Bernabeu on November 4th. They then play away to Ludogorets on November 26th before hosting a potentially decisive match against Basel on December 9th. 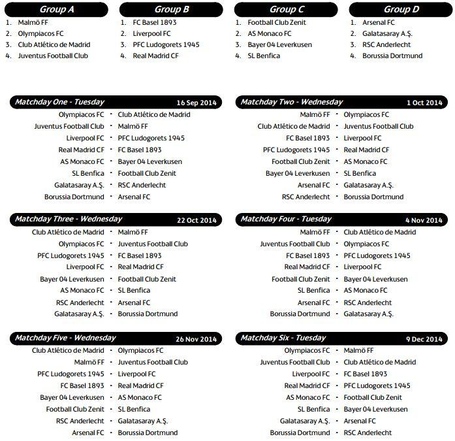