The start of the new English Premier League is just a week away, so let's look at how Liverpool's roster stands by updating our 3XI depth chart.

The last pre-season friendly is won, the first real match beckons, and football season is officially here. In just one week's time we'll be ringing in the new campaign watching Liverpool play Southampton, so that means it's time to look at the squad's depth once more.

This certainly seems like a much deeper group than it ever did last season, and that's without Adam Lallana in the lineup via injury. Plug him back in, and a 4-3-3 becomes more of a 4-2-3-1 again, with an attacking midfield band so versatile and dynamic that it will put most defenses in to a cold sweat just thinking about it. Without him, things are still perfectly fine, with a midfield trio that turns the focus a little more control-oriented, with more long passes from deep and supporting runs from the midfield.

Lallana would, in theory anyways, replace Joe Allen, who then heads to the bench as a reserve to Steven Gerrard and Jordan Henderson. Emre Can is also capable of filling the same role as Allen, but it seems likely that Allen would be preferred to start, for now, as Brendan Rodgers is more familiar with him and would want to bed Can in a little more before heaping too much responsibility on his plate.

On a whole, this is a much better balanced side with far better depth than we ever saw last season. Losing Luis Suarez hurts, obviously, but with the additions that have been made, this might be a better team than it was before, with the side working as a single unit to achieve its goals rather than "get it to Luis, put bodies around him in support, and see what happens." It will take a little time before this team gets up to full speed, especially with Lallana out for at least the first three matches, but this could be a damn exciting team once everything is said and done. 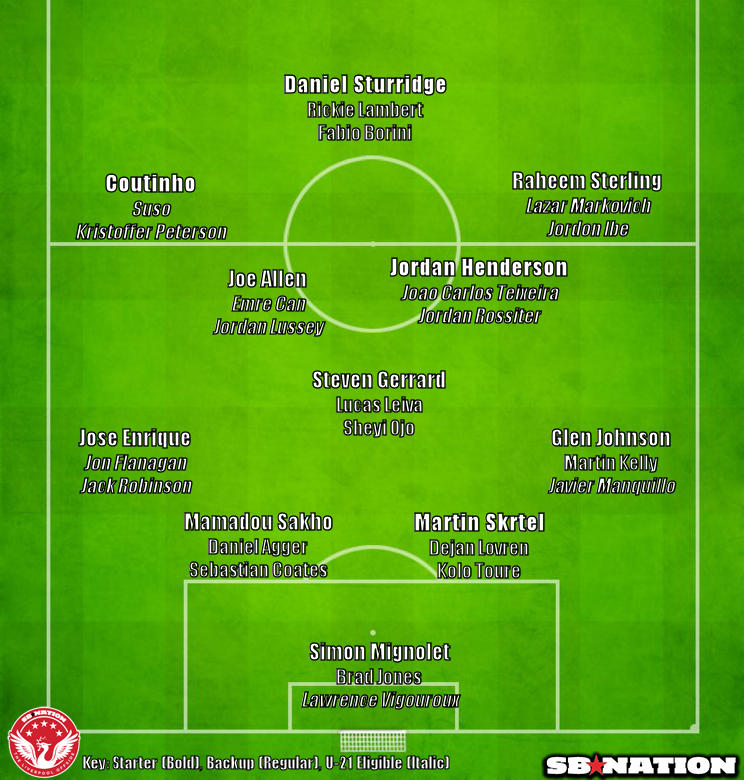 Note: The graphic was prepared in advance of the friendly before seeing Manquillo's performance against Dortmund. With that in mind, I would likely put him over Kelly were I making it now. The chart below reflects that change.