A suspension, three signings, and an approaching preseason training camp mean that it's time to revisit Liverpool's depth chart. Step on in, and allow us to part the veil...

Another preseason training camp is fast approaching, the transfer market is in full swing, and, oh yeah, Luis Suarez is suspended again, and likely on his way out.

Liverpool have added Adam Lallana, Rickie Lambert, and Emre Can to their depth chart, but have lost Suarez to suspension for biting a player for the second summer in a row. With it looking like he's about to leave the club on a permanent basis as well, that leaves a whole lot of shuffling to be done.

Lallana immediately slots in to a starting role in midfield, and given the available players slotting him in as the primary guy behind the striker makes the most sense. He and Coutinho would be able to interchange fairly seamlessly once they get a feel for how the other plays, as both work well on the left or in the center. To some extent Raheem Sterling would be able to get in on the position swapping as well, causing a lot of marking assignment issues in the defense that Daniel Sturridge would be more than capable of dealing with.

Deeper in midfield, the now-standard trio of Steven Gerrard and Jordan Henderson continue as the primary starters, with a capable and versatile trio of Lucas Leiva, Joe Allen, and newcomer Emre Can providing rotation and reserve options for Rodgers. With Gerrard's legs not getting any younger and the club starting at an uptick in fixture congestion, being able to have such a wealth of reserve options for rotation will be vital this season, especially if Lucas can stay healthy.

The defense is a shakier proposition right now. We don't know how healthy Jose Enrique is going to be yet, and Glen Johnson's form has been a guessing game at best for quite awhile now. Adding not just quality of depth, but a player (or two) who can challenge for a starting role should be Liverpool's next priority. Fortunately, things look to be in good shape in the middle, with the group of Mamadou Sakho, Daniel Agger, Martin Skrtel, and Kolo Toure representing as good a foursome at the position as you'll find in England.

And finally, since I'm sure all of you are wondering: should Alexis Sanchez show up, he can slot in pretty much anywhere in the front four. In the current setup, he would be the primary left winger/left attacking mid, and the aforementioned interchange along that band would probably be even more aggressive in order to take full advantage of his delightful skillset. 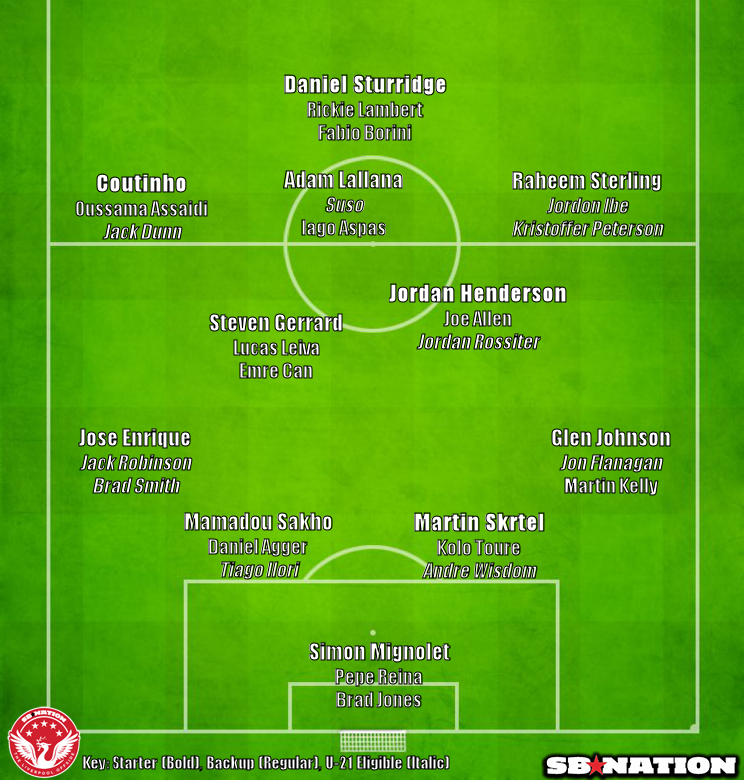