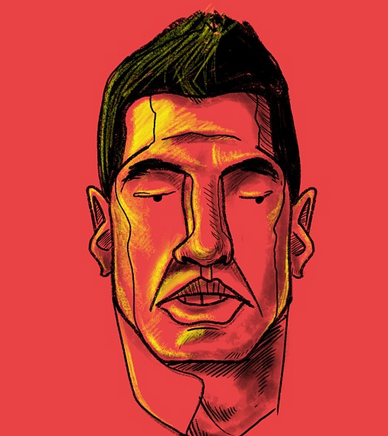 We’ve come to know him by a myriad of different names in the years since he signed for our beloved Liverpool Football Club from Ajax in 2011.

From his dive in front of then Everton boss David Moyes, to his innocent mistake in thanking the "chicken staff" for helping him win the PFA Player of the Year award this past season, Luis Suarez has had a special way of capturing the hearts of his supporters and driving a stake through those who have to watch him on display against their club.

Aside from the controversy which has been well documented, both in England and abroad, Suarez has become an enigma as a player and person. Journalists travel to Uruguay to unlock the secret to his borderline Da Vinci-esque combination of insanity and pure ethereal talent and have written think pieces spanning the better part of five thousand words trying to confine the man to a quantifiable space in history, defined by his behavioral record and scoring prowess.

Like other clubs, Liverpool has a special way of bringing supporters so close to their players, that the bonds forged are more familial than anything else. When we think of Steven Gerrard’s career waning to a close, we are hurt because we’re losing more than a player; these men have become part of the football family which we hold so dear in our hearts.

And like any good family would, the supporters of Liverpool Football Club have stood by our Luis in the face of strong adversity, brought on by the man himself. When he bites, we make jokes. Deflecting the pain is a way to deal with it, albeit less efficient. When he bites again, we are numb. Our minds hard pressed, not to defend Suarez, but to protect him. We offer no claims of rhyme or reason for the inflammatory actions unfolding on the pitch, simply our arms for him to be embraced by.

The co-holder of the European Golden Boot, the Lu Shwareh himself is a sight to be seen on a rainy night at Anfield. Dodging tackles, creating space, dribbling maniacally, Luis is a magician in the very definition of the word. He makes the unthinkable happen. He makes us believe. When he chipped John Ruddy of Norwich City from nearly 40 yards out of goal, we watched in awe, not because of the skill, but because of the sheer madness unfolding.

Unfortunately, like any great Greek tragedy, or in this case, a Uruguayan one, there is a hubris which ultimately leads to the downfall of the hero. Our beloved Luisito fancies himself in the mould of Icarus: flying too close to the proverbial sun which, for him, exists in the form of physical and verbal outbursts on the pitch. His Icarian existence has seen him turned to ash, only to be resurrected by the supporters of Liverpool Football Club while we hold his smoldering football body in our arms once again, nursing him back to sufficient mental health.

You see, Luis Suarez isn’t simply a player to us. Luis Suarez is an uncle, a brother, a father, a friend. We see him with his wife and their daughter Delfina and our hearts melt. Her name an anagram of our hallowed footballing ground and his expressions an anagram of the love we all express for him, jumbled together in the mind of one of the most brilliant footballers to have ever existed, sometimes showing themselves in confused rage. We cling to the hope that he will stay on the right path much as we hope that our family stays on it, because we care about their wellbeing.

There has been a surplus of rhetoric flooding the blog channels about how "we support the club and not the player" and "he was always going to leave us, anyway", but I don’t accept this. Luis Suarez is in the prime of his career, playing in a team which has just challenged for the Premier League title, playing in the Champion’s League. We do indeed support Liverpool Football Club, but we also support Luis Suarez as the individual which we know him to be. Our lives as supporters have been made very hard in years past, trying to rationalize the things that he does on the pitch, but just as the Mona Lisa’s identity is still undetermined, we are in awe of its beauty.

With a deal transferring him to Barcelona already seeming to be far along in its process of completion, coming to terms with El Pistolero leaving will be something that we will all try to deflect, but ultimately, we will have to face the reality of his departure. Forget the corrupt nature of FIFA and Barcelona for a moment and look at the corrupt nature of humanity. We are all tied together on this road, winding and turning for sometimes unknown reasons. Some people inevitably mean more to us, some less. As much as it will pain me to say it, when Daniel Agger leaves the club like he has been rumored to do, I will understand. It will hurt for a while, but it will get better. Suarez, much like a maligned figure in Fernando Torres, will hold a spot in my heart of disdain. His desire to leave for Spain is understood and his connections to the country are undoubted. But from a footballing perspective and a supporter’s perspective, it hurts. We are building something very special in the northwest of England. Liverpool are on the rise again and Luis Suarez was meant to be the focal point of that construction.

But, just like Icarus, Luis will one day fly close to the sun again. Unfortunately, when he burns up in the atmosphere of the footballing world this time, there will be no comforting embrace from the supporters of the club he once knew.

They’ve come to know him by a myriad of names since he burst onto the world football scene when he signed for Liverpool Football Club in 2011.