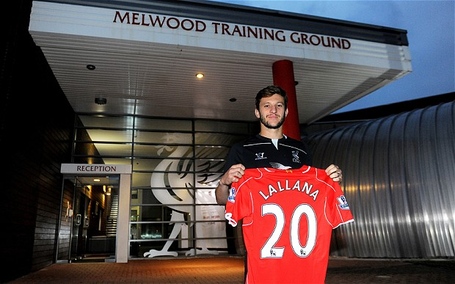 After losing Luis Suarez to Spanish giants Barcelona, Brendan Rodgers has now set about working on strengthening the squad to replace the void left by Suarez. With Markovic, Lambert and Lallana joining the reds Rodgers is still looking at possible goalscorers and defensive barriers in Loic Remy and Dejan Lovren.

The summer transfer window has been an exciting period of time for Liverpool fans, with around 60 million pounds being spent on transfers. Although it has been a tragedy for the club to lose their top goalscorer through Suarez, the situation has been revived with a whopping 75 million pounds in Brendan's hand to spend on further transfers. John Henry has allowed Rodgers to utilise the whole amount to strengthen the squad depth even further, which was lacking last season.

With Loic Remy on the brink of signing with the reds, there has still been concerns over the defence, as the club are still looking for at least one full back and a centre back. Dejan Lovren's arrival at Anfield is also imminent which has revitalised any doubts, but after Alberto Moreno's bid was rejected Liverpool are now looking at 19 year old Javier Manquillo from Atletico and Ryan Bertrand from Chelsea.

With all that said Liverpool don't really look like signing any major players such as Isco, Reus, Vidal or even Paul Pogba. Brendan Rodgers is still favouring the 4-3-3 formation that Liverpool used effectively last season, which allowed the team to directly counterattack the opposition and was partly the reason why they notched up 101 goals throughout the 2013/14 campaign.

Liverpool will need to find the 31 goals that Suarez scored last season, and the signings of Lambert, Lallana, Markovic and possibly Remy will boost their goalscoring opportunities. They will need to hit the ground running as they face Southampton, Manchester City and Tottenham in their first 3 fixtures which will be a tough test if they wish to replicate their outstanding season. Also the signing of Emre Can at defensive midfield and the likely signing of Lovren has given more stability towards the defence which was extremely weak throughout last season. As they conceded exactly 50 goals which was higher than than the 48 conceded by Crystal Palace sitting in 11th.

As Liverpool are most likely going to use their 4-3-3 it is down to who will be in the starting line-up. Here we predict who will play in which position.

In the front three at Liverpool there are several contenders for these three positions, most likely the three will be two wide men with the sole striker. With Acquisition of Markovic there is doubt over whether he will start against Southampton. It will most likely be Sterling on the right, Sturridge in the centre and Lallana on the left, but with the knee injury ruling Lallana out for 3-5 weeks Markovic might as well receive a start. If Remy does sign, then they might switch back to the two sole strikers with Sturridge and Remy, and sitting in the number 10 role Sterling. This was used for the last part of the season with Suarez and Sturridge in the striker roles.

In the middle three it is obvious Liverpool will stick with Coutinho and Henderson sitting in front of a deep lying playmaker through Captain Gerrard. There has been some speculation to whether Gerrard will start the season and instead having Emre Can in the deep lying playmaker role. Last season Liverpool's midfield was very strong but at some points problematic with injuries or suspensions to Gerrard and Henderson. With Emre Can's signing it means there is some friendly competition for these three midfield positions with Joe Allen and Lucas also contendesr for these places unless Lucas leaves either on loan or permanently.

This was the most vulnerable part of Liverpool's structure, with 50 goals being conceded. Rodgers had to result to playing Flanagan out of position at left back due to an injury to Enrique and poor performances from Aly Cissokho. Liverpool also were hit hard due to poor performances by Glenn Johnson and Daniel Agger which left only two centre backs to hold the fortress at the back. With Dejan Lovren's signing imminent it will help Liverpool stay strong at the back with Sakho most likely starting with Lovren. Flanagan's strong performances last season has seen him push for the right back role ahead of Johnson. With Manquillo's signing also on the verge he may push into the left back spot if no other replacement is made before the season has started.

With the arrival of Pepe Reina from his loan spell at Napoli there is the possibility of him departing permanently as Mignolet is still favoured as first choice. It would be ridiculous if both were to stay because Reina's wages are too high for a backup keeper and would deplete the funds of the Football Club. It looks as if Mignolet will start the season off as he might of had a mixed season but there needs to be faith in his ability.