3XI: End Of Season And Looking Ahead Edition

With the season over and transfer season upon us, let's start things off with a look at the current state of Liverpool's depth chart.

Share All sharing options for: 3XI: End Of Season And Looking Ahead Edition

The season is over, the rumor mill is rapidly heating up, and it's high time to take an assessment of Liverpool's roster and see what needs shoring up. With loans expiring and sending players both to and from Anfield, things are about to get shaken up.

The graphic below reflects the current state of the roster, with players away on loan returned to Anfield and the two players Liverpool have in on loan sent back to their respective squads. Obviously several players will be leaving, and there seems to be some small chance that Aly Cissokho returns, but until then this is what there is to work with.

There were long stretches last season when just a handful of injuries left the squad threadbare, and with Champions League football on the offing, that's something that Liverpool can't afford to have happen again. Looking at the chart below, there's a number of areas that need improved quality of depth, and impact depth in attacking areas is a must as well.

With Fabio Borini back, the situation at striker is helped somewhat, but another versatile attacking player, preferably someone who's primarily a wide player, is a definite must. Another versatile midfielder who can play a holding role and help elsewhere would be good, especially if he has the legs and work rate to give Jordan Henderson a proper backup.

Elsewhere, at least one fullback is needed, preferably a left back who can push Jose Enrique after the Spaniard's season was almost entirely lost to injury. Jon Flanagan did an admirable job stepping up when needed, but his quality and versatility would best serve Liverpool from the bench or in a rotational role. Another goalkeeper who would be a better backup than Brad Jones would be good as well, as Pepe Reina is a certainty to leave.

From there, it depends on who is sold or loaned. Oussama Assaidi and Iago Aspas seem likely to depart this summer, but they were accounted for in the above list. Depending on who's purchased, we could see loans out for some combination of Jordon Ibe, Suso, Joao Teixeira, Andre Wisdom, Tiago Ilori, and potentially some of the young fullbacks as well. 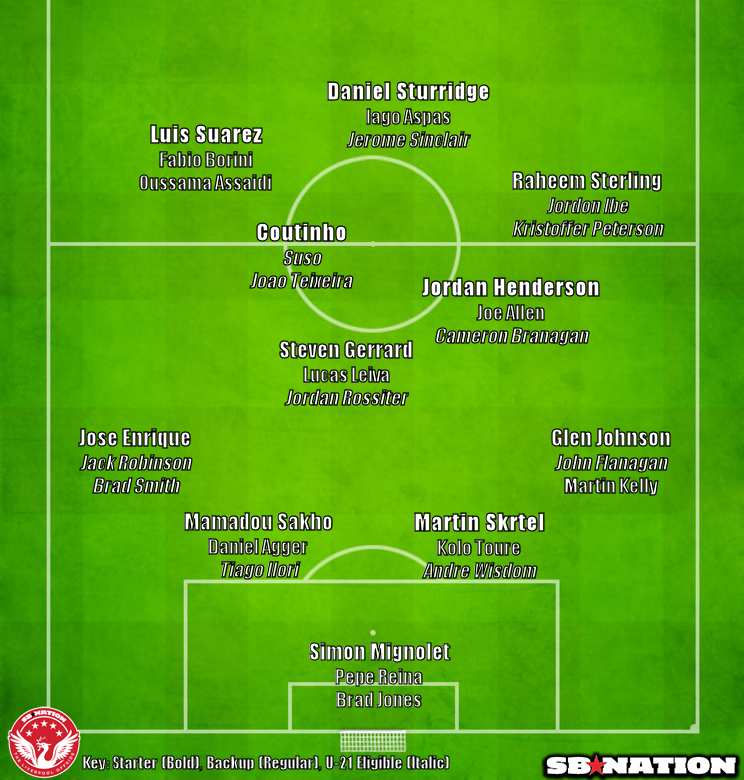 I'm dispensing with the chart for this version because it's a pain and of reduced value with the season over.

This looks as though it's going to be a summer with plenty of action as far as transfer activity goes. Liverpool have already been linked with an even larger host of players than seems normal for this time of year, and it's a list that's only going to grow as the summer drags on. The World Cup may stem that tide somewhat, but once it's over the floodgates will be well and truly open. This roster is likely going to look very, very different in just a couple months' time.