A Detailed Look at the Results Between Seasons

Obviously we know that Liverpool did much better than last season, but where in the fixture list did the improvements come?

Share All sharing options for: A Detailed Look at the Results Between Seasons

The season is officially in the rear-view mirror. Ultimately it was much more successful for Liverpool than almost anyone expected, with a staggering 23-point improvement that catapulted the club to second place and kept them in the title race until the last day of the season.

We know improvements in tactical deployment drove a 30-goal boost to the club's tally (netting a staggering 101 goals), but how did those improvements show up in the fixture list compared to the first year under Brendan Rodgers? How did the supposed "dramatic worsening" of the defense show up outside of simply allowing seven more league goals?

Well, now we have our answers. Below is a chart comparing the results of each fixture over the past two seasons, home and away, showing the changes in scoreline and result value. With the promoted and relegated sides, they were paired up by corresponding finish last season (Hull to Wigan, Crystal Palace to Reading, and Cardiff City to Queens Park Rangers) for the purposes of this comparison. 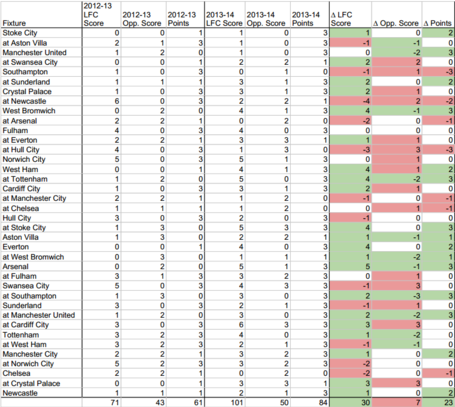 Click to enlarge. Thanks to Robert Lintott of 7500 to Holte for sharing the template.

That's a whole lot of green, which is incredibly satisfying to see. Some of the red in the goals against column is pretty disconcerting, though, especially with four of the fifteen fixtures that saw Liverpool surrender more goals have a whopping three more goals allowed than in the previous season.

Still, though, when you look at the totals against some of the clubs that have been a regular factor in the Premier League in recent seasons, you have to be impressed. Six more points, two more goals for, and four less against when facing Manchester United. Three, three, and one against Arsenal. Three, five, and four against Tottenham. Things were less encouraging against Manchester City and especially Chelsea, but nothing is perfect, and the performances in those matches were still a fry cry better than those against those sides last season.

Of course, this only gives you so much information, useful and interesting as it is. It doesn't really do much to account for the difference in standings for the various clubs involved, so soon we'll be taking a look at the difference in performance that Liverpool put in against each position in the table.