The Statistics That Explain Liverpool's 2013-2014 Season

Share All sharing options for: The Statistics That Explain Liverpool's 2013-2014 Season

For the first time in half a decade, Liverpool are contenders for the English Premier League title. While LFC are not an underdog side in any general sense, in resources and wage bill they are far less well-positioned for a title run than their competitors Manchester City and Chelsea. This run at the title is unexpected both because Liverpool are not the kind of club that makes title runs in the contemporary EPL, and it's unexpected because quite literally people did not expect it. This has spawned a small industry of sportswriting that tries to explain what Liverpool have done.

Based on their underlying stats from 2012-2013, Liverpool were expected to be among the best sides in the Premier League.

This industry has a problem. It can tell you about Liverpool's superstar Luis Suárez, and it can tell you about the tactics of manager Brendan Rodgers. A certain kind of writer might try to tell you about Liverpool's football operations and how Liverpool owner and noted sabermetrics believer John Henry is seeking to build a behind-the-scenes analytics department to rival that which powers his Boston Red Sox. And those are all great stories. But those are stories about Liverpool that apply just as well to the 2012-2013 season, in which the Reds finished 7th, as they do to today's title condending Liverpool squad. That side had Brendan Rodgers organizing their tactics, they had Suárez leading the line and creating. They had the same football nerds behind the scenes.

You can see this in Bill Barnwell's enjoyable piece on Liverpool at Grantland. He cites Suárez and youth, both of which the club had in abundance last year, too. He cites the scoring record, which is impressive, but (a) is more something to be explained than an explanation itself and (b) Liverpool scored 71 goals last season, so this is a continuation and improvement of an already effective attack. The explanations of Liverpool's 2013-2014 form that do not fall victim to the "also true last year" critique tend to be unconvincing in themselves. Barnwell cites Liverpool's uncluttered fixture list in the absence of Europa or Champions League play. While certainly this is a boon, it can't turn a 7th place club into a title contender.

The club has not been terribly active in the transfer window, with their biggest acquisitions coming last January rather than over the summer. This isn't about the classic story of new talent powering a run to the top. One can point to a "bedding in" period or "maturing" of either the manager or the players. That isn't illegitimate, but it feels a bit like dark matter to me, a placeholder until a comprehensive explanation can be put forward.

My Hypothesis: Liverpool Were This Good Last Year

The method behind expected goals, which you can read about in the "Shot Matrix" articles linked above or at the EPL Advanced Stats page, is pretty simple. For each chance, I estimate the average probability of a goal being scored, based on location on the pitch, whether the shot is taken with the head or the foot, whether it is a free kick or from open play, and the type of pass that assisted the shot. Over time, these estimates of chance quality are a better metric of team quality than raw goals scored or simple shot totals. And in the case of Liverpool, based on their expected goals in 2012-2013, the underlying stats expected this club to be among the best in the Premier League. 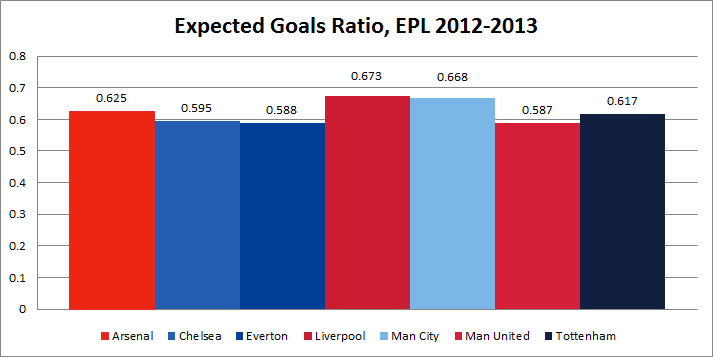 By the chances they created and allowed, Liverpool were as good last year as Manchester City, better than title winners Manchester United. While Sir Alex Ferguson may have had the ability to build teams and tactics that consistently outplayed expected goals (and we see something similar at Barcelona), the collapse of United this year suggests such an approach is not sustainable.

Liverpool's lack of aggression in the summer transfer window makes sense in this context. While many fans complained about the club not adding significant talent, perhaps they expected the team to be able to compete with the roster on hand. These numbers suggest that the 2012-2013 Liverpool club was not in need of a significant infusion of talent, but instead just needed another year together to play the same football and expect better results. Returning most of the same players and the same manager, shoring up some weaknesses at the back—that's a strategy for a club with the quality it needs to achieve its goals. And the decision has been justified by Liverpool's performance this season.

Of course, the previous analysis simply opens up a new question. What was wrong with Liverpool last season such that a club that created some of the best chances in the league failed to win enough games to finish above Everton in the table? There are a couple of possible explanations, but I want to put forward the statheadiest of stathead explanations. A collection of mostly random factors that could not be expected to continue over time. I really do think the club was in a long goal-scoring and game-winning slump over especially the first 20 matches of the season, and this slump has come to and end only in the following season. If we look at Liverpool's expected goals ratio compared to their goals ratio, we see something that looks very much like regression to the mean over time. 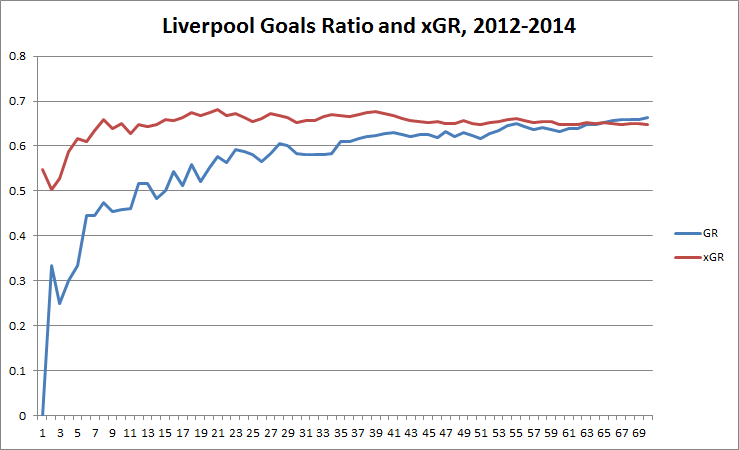 This shows Liverpool's actual goals ratio (GR) and expected goals ratio starting with the first match of the 2012-2013 season and continuing through to the club's most recent match. The goals ratio takes weeks to get into positive territory, while xGR stays above .600 from about the fifth week on. This looks like regression to the mean over Rodgers' tenure.

If you look at expected points rather than expected goals, you see a similar pattern although a longer period in the wilderness. 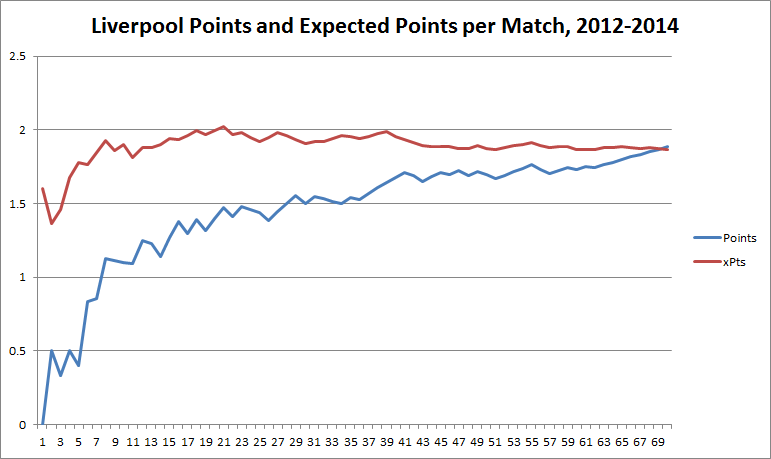 By expected goals, Liverpool should have averaged close to two points per match last season, and it's taken the club's hot run through 2014 to finally bring actual points into line with expected points. So perhaps this recent stretch has not been a wild and unexpected occurrence. Rather, I suggest it's the hot streak that was needed to bring the top line numbers into line with the underlying statistics. (I've been projecting Liverpool as likely title contenders for weeks, so it's worked out to see them finally getting the breaks for a stretch of games.)

What About Sturridge and Coutinho?

While Liverpool's transfer windows have been quiet recently, they did make two fantastic purchases last January in striker Daniel Sturridge and advanced playmaker Philippe Coutinho. In the charts above, you do not see a ton of improvement in either expected goals or expected points after 24 matches (which is the end of the January transfer window). However, we do see some improvement in the conversion of chances into goals and of expected points into points.

I think this is most evident in Luis Suárez's statistics. Suárez shows a very consistent rate of shots attempted, based on expected goals, but has surged above expectations in his conversion rate since Sturridge and Coutinho joined him. 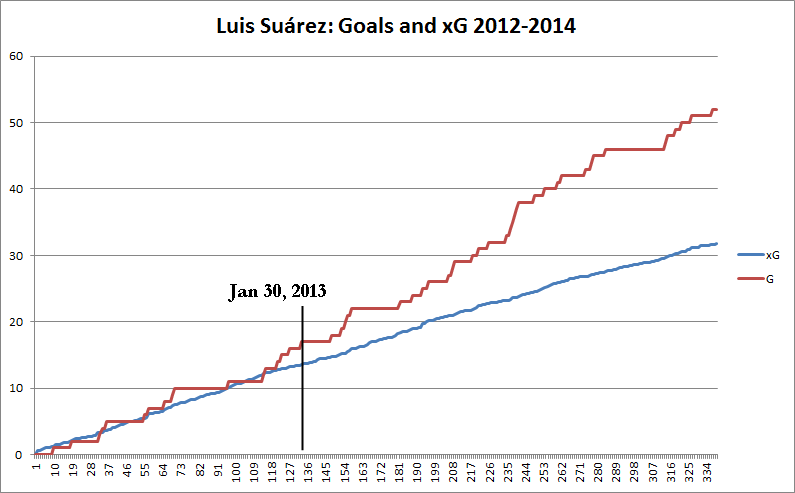 In general, expected goals are my preferred way to evaluate likely team quality and to evaluate most players' finishing. However, among elite, high-usage strikers, there is a pronounced tendency to score more goals than the xG model predicts. Suárez spent most of the first half of the 2012-2013 season converting chances at no better than a league average rate. Once he was joined by attacking partners of the quality of Coutinho and Sturridge, then his conversion took off. I think it's possible that part of Liverpool's problem was a failure to back up Suárez with sufficiently skilled attacking talent, and so they weren't putting themselves in position to convert chances at expected rates. Part of the story, then, is not just that Liverpool were this good last year. They were one or two pieces removed from glory, and the additions of Sturridge and Countinho put them over the top.

As with Liverpool's recent run of wins, Suárez's current finishing form is almost certainly unsustainable. But if these numbers are correct, Liverpool do not need to remain in their recent form to challenge for the title. They just need to play football at the same level they've been playing since Brendan Rodgers took charge in the summer of 2012.