A few classy cameos in the season's first half weren't enough to sustain Luis Alberto for the length of the campaign, but Brendan Rodgers has asserted that the talented young Spaniard's Liverpool career has plenty of time left.

He's supposed to be Spanish. Some say his father was German. Nobody ever believed he was real. Nobody ever knew him or saw anybody that ever worked directly with him. But to hear Brendan Rodgers tell it, anybody could have worked with him. You never knew; that was his power. The greatest trick Luis Alberto ever pulled was convincing the world he didn't exist. 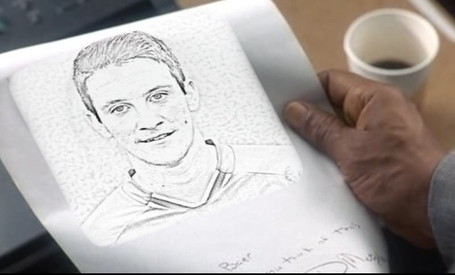 Or, in this case, it's Rodgers playing the trick on Alberto, as the young Spanish midfielder/playmaker has had a heck of a time breaking into Liverpool's first team with any sort of consistency. Early glimpses had us wanting more--composed in possession and displaying good vision, he made a few appearances throughout the fall, each seemingly building on the previous run-out to string together a promising start to his career on Merseyside.

And then everything came to a halt. Rodgers settled into a preferred eleven and brought Joao Teixeira, and Alberto suddenly found himself not only buried on the bench, but out of the matchday squad completely. He'd pop up in training pictures or in the tunnel pre-match, but Luis Alberto has faded further and further from the picture over the second half of the season.

His manager finally acknowledged that trend--and, perhaps more importantly, his existence--in the build-up to Sunday's visit to West Ham, noting that this season's trajectory isn't necessarily going to determine his fate at the club:

"It's probably been a difficult season for Luis because he hasn't had many opportunities to make an impact. But he needs to keep working. He's still a very young player and he does have quality. It shows you the level of where we are at. It was a signing for the long term, that was the idea. He's a young player who has come in and sampled life at a big club and made a contribution. He will stay with the group for the rest of the season and then we will review his development come the summer.

"I look at training and assess it every day. Luis is working hard but we've had young players coming in and making an impact like Joao, who has been exceptional. I'm always looking at the dynamic of the squad and it changes from week to week depending on the game."

That seems to point to the potential for a loan deal, and while a move back to Spain might make sense, it would also be nice to see him stick around the Premier League if possible. For all his good qualities--of which he does have many--there's still a sense that he likely needs to develop a bit more urgency to fit into the footballing style Brendan Rodgers is trying to develop, and if Rodgers' words about only adding to the existing squad in the summer hold true, Alberto's going to have to either displace one of the Joe Allen-Jordan Henderson-Philippe Coutinho-Raheem Sterling collective or head somewhere else to get minutes.

Right now the latter seems more likely, and if he does end up elsewhere for a spell next season, hopefully it's a situation that proves to be a good fit for all involved. At 20 years old there's more than enough time left for him to have an impact at Liverpool, and the evidence so far suggests that, if given the opportunity and time to grow, he's more than capable.