Race for the Title: Chelsea Lose Control of Their Destiny, Arsenal Battle Everton for Fourth

With the season nearing its end, Manchester City, Liverpool, and Chelsea are fighting for the Premier League title while Arsenal's implosion means the Gunners will have to battle Everton for fourth.

Share All sharing options for: Race for the Title: Chelsea Lose Control of Their Destiny, Arsenal Battle Everton for Fourth

With less than two months to go in the season, only two clubs can win the title without help. Frontrunners for many will remain Manchester City, and rightly so: sitting third on points but with two games in hand on their nearest competitors, if the Citizens win out, they end the season with an untouchable 91 points and the title. For Liverpool, capable of achieving 89 points should they win out, victory at home against City on April 13th would drop City's maximum points total to 88 and give the Reds the edge.

Having stumbled to defeat against Crystal Palace two weeks after losing to Aston Villa, Chelsea find themselves third favourites and relying on Liverpool and Manchester City to drop points. If they were to win out, the London side would record 87 points. All three sides, though, have separated from the pack and are the only clubs with a realistic chance to win it all, with City averaging 2.23 points per game, Liverpool averaging 2.22 points per game, and Chelsea averaging 2.16 points per game.

Some fans will continue to insist that as long as it's mathematically possible there's hope, but the chances of Arsenal winning out while all three sides ahead of them stumble enough for even winning out to matter is exceptionally unlikely. Meanwhile, Everton are closing the gap on the top four. Counted out by many this season, Everton have persevered under Roberto Martinez and are averaging an impressive 1.94 points per game with a maximum potential points haul of 81 points, one less than Arsenal. 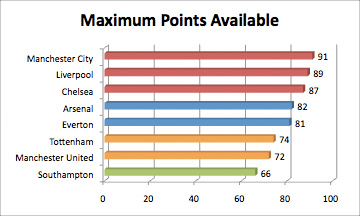 With Tottenham fading, Arsenal and Everton are now largely alone in their battle for fourth, and if Everton can beat Arsenal at Goodison on Sunday they will pull within a point of the Gunners with a game in hand. With a schedule that appears easier on paper, though, Arsenal may remain slight favourites for fourth no matter the outcome. Even so, as the season winds down, the London club face the very real chance of finishing fifth after leading the league as recently as two months ago.

As Arsenal are out of the race for the title, so too are Tottenham out of the race for the top four, but with Europa League qualification available to the league's sixth-place side after Manchester City won the League Cup, they're still in Europe—barely. Largely thanks to Tottenham's poor recent results, Manchester United are now a mere two points back of Spurs, and with Tottenham's negative goal differential, a tie would see Spurs miss out on Europe. Southampton, a further six points behind United, aren't a threat. 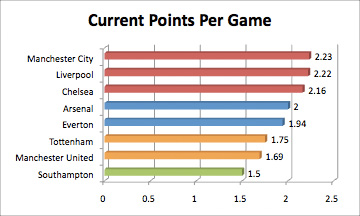 Liverpool's involvement in the title race is something of a surprise given the club began February on 1.96 points per game, but eight wins in a row towards the end of the season earns a club the right to be something of a statistical outlier. In two months, Liverpool have raised their season long points per game average by more than a quarter of a point, taking themselves from top four contenders to title contenders. City and Chelsea, both on 2.21 points per game two months ago, have largely stayed on course.

Arsenal's decline, meanwhile, has mirrored Liverpool's rise, as the Gunners have seen their average drop by more than a quarter of a point in the same period. Everton are up slightly, having improved their points per game average from 1.88 to their current 1.94, but that there's a race for forth is largely thanks to Arsenal imploding in quite spectacular fashion. Elsewhere, Spurs have dropped slightly from 1.83 to 1.75 while the arrival of Juan Mata was only able to nudge United from 1.67 to 1.69.

Outside of Liverpool and Arsenal, the reality is the top seven sides have have done little to alter their outlooks over the past two months, with an average change of less than ±0.05 points per game since the close of the transfer window. Manchester City, Chelsea, Everton, Tottenham, and Manchester United are today pretty much exactly where their points per game averages at the start of February said they would be. Any change to the picture is thanks to Liverpool, up 0.26 points per game over the period, and Arsenal, down 0.29 points per game.

As a result, there are now three distinct battles in the top half of the Premier League. Manchester City are slight favourites over Liverpool and Chelsea for the title in a three-way race, while Arsenal have fallen away and face a trip to Goodison this weekend that could see them fall behind Everton, at least temporarily, in the race for fourth. Spurs, meanwhile, are far from certain of holding on to Europa League qualification with United on their heels, while immediately behind them there's little left to play for beyond pride.