This month's look at the depth chart reveals a delightfully healthier squad than we've had in a long time.

For the first time in a long time, Liverpool's depth chart is looking... pretty OK, actually. Daniel Agger and Glen Johnson made their returns recently, and Mamadou Sakho and Lucas Leiva recently played for the reserves. The only long term injury among regular squad members at the moment is Jose Enrique, but with John Flanagan and Aly Cissokho doing pretty OK at left back recently, Liverpool can survive without him for the time being.

This return to health couldn't come at a better time. The next forty-four days represents a tough run for Liverpool, starting with the Manchester United match this Sunday, and visits from Tottenham, Manchester City, and Chelsea, as well as a couple potentially tricky away ties that can't be overlooked with Cardiff City and West Ham. Having a fit and firing squad will be vital for this stretch, as it's going to make or break Liverpool's season.

The lack of any cup or European runs left for Liverpool means they can focus utterly on the league, which should help compared to some of their rivals. That said, both Arsenal and Manchester City have bombed out of the Champions League, and Manchester United's status in the competition is looking more than shaky, so they'll be able to focus their energies more fully as well.

Liverpool are currently second. They're even on points with Arsenal, but have a significant goal differential advantage. Manchester City are two points back, but have a GD edge over Liverpool and two games in hand, so it's not unreasonable to mentally place Liverpool in third right now. Chelsea stand seven points clear, but both Liverpool and Arsenal have a game in hand on them, so that gap is probably closer than it appears.

All that's to say that Liverpool has an opportunity to seize. Chelsea and City have stronger squads and advantageous positioning. If Liverpool can win those two matches and knock down Tottenham, though, they'll be in a strong place to challenge for the pole position. Focus is going to be key, and a fit squad will go a long ways towards making things a bit easier to manage.

Hang on, germs and germettes. This is going to be an interesting ride. 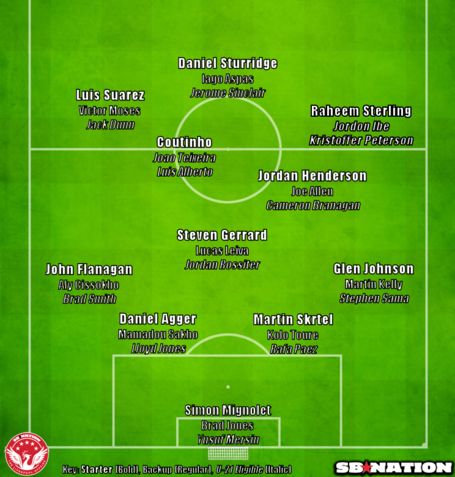 Sorry for the... changes... in quality in this edition. There's been some technical issues at La Casa De Dowley that have rendered me unable to use Photoshop, forcing the use of workarounds that just plain don't work as well. That's also part of why this is late.