A gritty win that becomes the hallmark for an ascendant season in front of a raucos Anfield crowd. Yep. This is Liverpool. 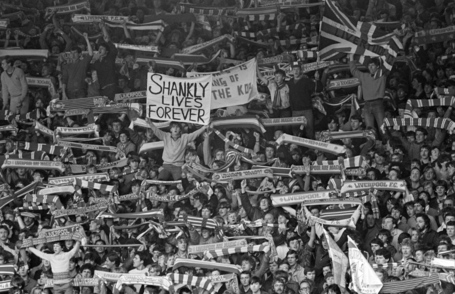 Couldn't find a crowd shot from 1962, but this kinda works, yeah?

On the back of an Ian St. John brace, Liverpool dispatch of Chelsea FC's visit to Anfield for a 4th round FA Cup tie. In front of a crowd up for a fight. Then, in front of a crowd stunned into silence. Eventually, coming out for a curtain call before a crowd delirious over the scalping of such a big opponent. This win had all the hallmarks of a classic sports movie and then some.

LFC’s reward for dispatching the First Division giants? Over 270 minutes of scoreless football, over three legs at three different venues against Preston North End. This, sadly, is also Liverpool. And while Shankly and the lads were certainly bound to be disappointed to be taken out of the FA Cup, they all knew it was all still left to be played for as promotion lay just in front of them.

Returning for a minute to one of my well trodden tropes (sorry, Ed), isn’t it a bit spooky that the clinching victory for the LFC season came in a fixture against recent bogeymen Southampton? I mean, in this season, Shanks and the lads seal promotion by beating Shouthampton with 5 matches remaining, staving off a season long challenge from Leyton Orient. *Not saying what I think I want to say cause this season is still live, damn it!*

And now Shanks and the lads have next season to look forward to as a new day has officially arisen over Anfield. Promotion granted. The First Division awaits. And all on Merseyside are watching.

- Again, Peace knocks it out of the park with his prose highlighting the big win over Chelsea. A bit confused about the choice of crowd song (and if anyone can speak to why he chose that song over, you know, THE song, that’d be appreciated), but the pacing, tenor and subtle shifts in the prose to indicate tension. Brilliant. Absolutely, brilliant.

- So, this Roger Hunt lad can score a bit, eh? This is again, for me, a bit of an education as these names are generally the ones floated around here or there but that don’t really stick for me as I have very little experience with LFC History. Nice, then, for me to be able to pick out his name from a podcast I’d listened to recently (The Daytrippers, I believe it was), and then understand why they’d rated him so highly. Just boss.

- Since we’re all talking about it: any big games/matches (footy or otherwise) that you’ve been a part of? I have two big baseball memories. First, as a relatively new resident of the Los Angeles from the Philippines, my father woke me up out of bed at the age of 5 to watch the last inning of the opening game of the 1988 World Series. You know, the Kirk Gibson game? Well, yeah. That happened. Magic. The other memory is of attending my first playoff game at Chavez Ravine in 2009 as the boys made it to the NLCS against the Philadelphia Phillies. The game didn’t turn out as I’d hoped, but the atmosphere…whew. Don’t ever let anyone tell you that LA fans lack heart cause I saw it that night. And it bled Dodger blue.