A mixed month results-wise also helped the squad become even thinner than it was before. Yay!

Well, that was a delightful month, wasn't it? The results were more good than bad, the club won twice in the FA Cup, and they eviscerated Everton in the Merseyside Derby. That said, a lot of the play was uninspiring, the club fell short twice in the transfer window, and the injury situation has actually gotten worse.

Now a depleted squad gets to play Arsenal twice this month, and also face a tie against Swansea, who are rarely easy to beat. It appears that they'll continue to be without the services of Jose Enrique for awhile, who's been joined on the long-term injury list by Lucas Leiva, Daniel Agger, and Glen Johnson since he went down. Several other players have come back recently, and Mamadou Sakho will hopefully return soon, but things are still looking a little rough in the squad right now.

Where that shows through the most is in the depth. This edition of the 3XI graphic required more shuffling, head-scratching, and cursing than any previous version. Thank god John Flanagan is healthy, because with Ryan "McAlves" McLaughlin away on loan, the club only has one other healthy right back, and "healthy" seems to be a relative term with Martin Kelly. As it is, I had to move Stephen Sama from center back to right back, and he's played a total of maybe two hours there in friendlies and reserve matches. That's also why Sakho is listed despite being hurt, as he's hopefully back very soon and there's literally not a sixth CB worth considering right now without him.

The return of Jordon Ibe to health and Kristoffer Peterson from his successful Tranmere Rovers loan should give the club a bit of a boost in their attacking depth. There's been very limited Reserves and Academy activity lately with which to judge how players are doing, but a 4-2 thrashing of a senior-heavy Arsenal reserves side two weeks ago featured strong performances by a number of players on this list. Fortunately, with three Reserve and four U18 matches on the docket for this month, there will be chances for these kids to get some more minutes and for us to watch them develop. 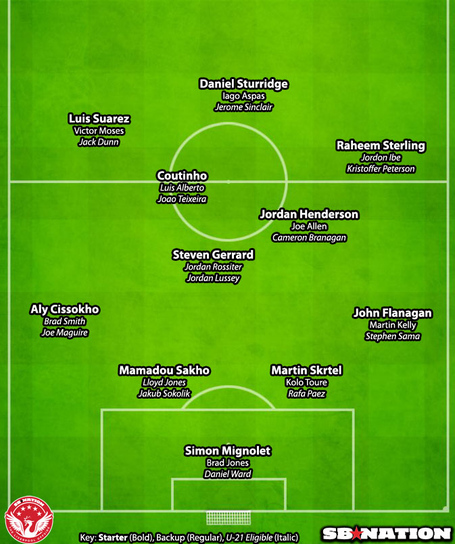 *Thanks go to Jake for helping me shuffle around some of the reserve kids on this one, as well as for the "McAlves" nickname. This was a more difficult one to build than normal.

The graphic has been upgraded with friendlier text. Sadly, it took me far too long to realize that the previous standard was unkind to those with various kinds of color blindness. My apologies for that, and hopefully this will be easier to read for everyone.