With the season heading into its final months, the numbers say the race to finish fourth in the Premier League is down to Liverpool, Everton, and Tottenham, with Manchester United now out of the running.

Share All sharing options for: Race for the Top Four: Manchester United Crash Out Leaving Liverpool, Everton, and Tottenham

For every side that isn't Chelsea and Manchester City, the first league match of February has been played and a mere 14 games remain in the 2013-14 season. With just over three months to go in a season that at times seems as though started only yesterday, and with Liverpool, Everton, Tottenham, and Manchester United having all played their 24th match, it's time to take our first in-depth look of the season at the top four race.

Liverpool manager Brendan Rodgers has previously discussed the top four race as being one a side needs 75 points to win. While that might reasonably guarantee a top four finish, historically the bar should be set a little lower. Over the past eight seasons, in fact, it has taken just a hair over 70 points on average to wrap up a top four finish. A pair of outliers ten points below the average in 2003-04 and 2004-05 undermine the usefulness of a ten year average. 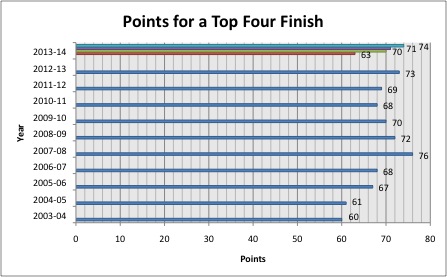 This means that, realistically, Manchester United's top four challenge is over. If even just one of Liverpool, Everton, or Tottenham maintain form, this season's top four finisher will end the campaign with at least the 70 points that has been the average over the past eight years. And for United, in order to reach even 70 points they need to earn 30 points in their remaining 14 games—they would, in short, need to win at least 10 out of 14 at a rate of 2.14 points per game.

Even winning 10 of their final 14 would only put them in the running with Tottenham and require Liverpool and Everton's form to dip. In the case of Liverpool, it would have to dip significantly, dropping all the way down to 1.62 points per game from their current 1.96 points per game, in order for Brendan Rodgers' side to end the year on 70 points—and even then, Liverpool would almost certainly have the edge on goal differential.

With three clubs better positioned and the season approaching its final stretch, the picture isn't pretty for United. And that's even assuming it's reasonable to think David Moyes' side can win 10 of 14 against a slate featuring seven sides currently in the top ten: Arsenal, Liverpool, Manchester City, Everton, Newcastle, Southampton, and Aston Villa. United can only drop 12 points to still have a chance—and even then it's an outside chance; a chance to be in the conversation.

Trailing only one club for fourth they might see a few swing games in that schedule and an outside chance. Trailing three sides, even a good result against Liverpool or Everton won't be enough to significantly change the math for United. The race for the top four between Liverpool, Everton, and Tottenham remains tight, and it's far from certain which club will take the final Champions League place.

Manchester United are no longer part of that race. Some of their fans will remain defiantly hopeful for miracle implosions by all three of the clubs they're chasing and for their side to find something approaching title-winning form after a season of struggling. The reality of the situation, though, the numbers and historical precedent, says United's top four hopes are done.