Bringing B Teams To England

With it becoming increasingly clear that the current Reserves system doesn't do enough to prepare young English players, how can England's leagues properly integrate a B team system to their existing structure?

Share All sharing options for: Bringing B Teams To England

One of the more common quandaries around footballing circles in England in recent years has been that of youth development. The nation's production of high-quality young players has slowed dramatically in comparison to other major nations, and it's becoming a concern. England is still getting some elite talent through to senior squads, but not nearly as many as they once did, and they've fallen behind the likes of Spain, Germany, and even France and Italy to some extent of late.

The problem seems to stem not so much from the Academy system, as some believe, as England's lower-level youth teams are generally quite competitive internationally. Instead, the issue seems to fall in the "bridge" between Academy youth teams and the senior squad for higher-level clubs. The jump in quality is simply massive, and very few players are good enough at a young age to go straight from one to the other. Raheem Sterlings and Wayne Rooneys don't exactly grow on trees, after all.

While quality young talents generally find an easier time getting their footing with a lower-level club on the rise (see: Luke Shaw and Wilifred Zaha), trying to develop young players through loans doesn't always work. If you find the perfect fit and situation for a player, they can get gobs of valuable playing time at a good level for them, but finding that fit is not nearly as easy as it might seem, and history is littered with seemingly capable players getting loaned and then barely ever playing. While England's clubs maintain "reserves" teams, the quality of play is too hit-or-miss and the matches far too infrequent to use as a proper development tool.

Spain and Germany have a well-established system of B teams to help their clubs bridge this gap, and it's served as a valuable tool to get their players ready for higher levels of football. These are clubs tied to the senior squad, but playing their own fully competitive matches at lower levels of their nations' football pyramids. That gives the clubs a good platform to analyze their younger player's skills and abilities at a better level to give them a better idea of what the players can provide the club in the long term, and what they need to get there.

Now England's FA is starting to talk about forming a "B league", which sounds exciting... until you look at the details. Once you do, it quickly becomes clear that it's basically no different than the current Reserves system with a higher age limit and maybe, maybe, a few more matches. Making it limited to a very select subset of English teams (those with "category one" status in the so-called Elite Player Performance Plan) totaling just 22 clubs makes it of even more specious value.

So what can be done differently to give young players being developed in England as much of an advantage as possible? Rather than the "B league" being proposed, I instead propose a more integrated B team approach similar to those of Spain and Germany, though somewhat less disruptive of the established league structures as opponents of such a move have frequently claimed it to be. 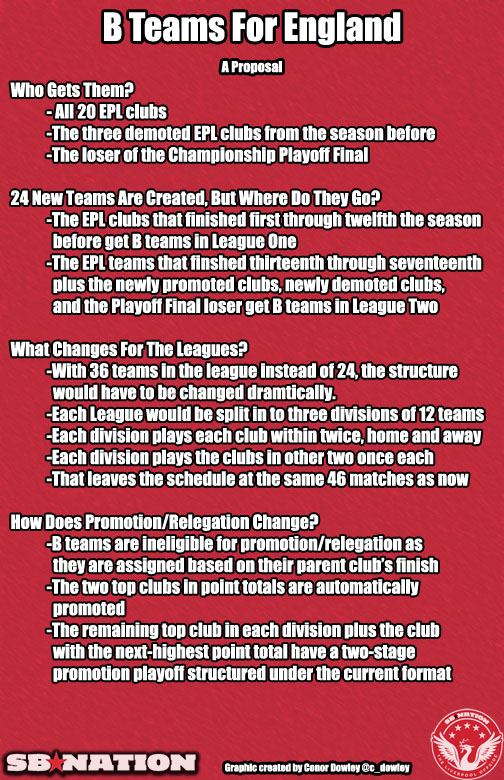 Obviously, that's a lot to take in and digest, and there's even more to flesh out and detail. Let's take it a step at a time, and try to answer some questions while we're at it.

Why twenty four clubs? First, it allows every Premier League team to be involved in the process rather than just an elite few as other common B team proposals frequently feature. It also keeps the relegated teams involved in the short term and gives a consolation prize of sorts to the Championship playoff runner up, giving them an opportunity to develop more talent without sacrificing first-team playing time for more experienced players while they push for promotion to the EPL. Also, it allows for a more even balance when spreading the B teams between League One and League Two, and makes managing the needed structure and scheduling changes simple.

When thinking about this plan and discussing it with others, the issue of the financial burden for smaller clubs trying to support another competitive team arose. However, several factors would hopefully combine to make that a non-factor. One, this would replace the existing Reserve teams for the involved clubs, and would largely draw on the same fringe first-teamers and Academy players those Reserve squads currently utilize. There might be some additional investment needed to field a competitive team, but given the level of the squads involved (League Two for most of the clubs that might be concerned), the purchase and wage costs would be small compared to those of EPL players.

For those relegated clubs that have lost the significant EPL TV revenues and likely lowering of potential sponsorship revenues, the Premier League already provides several years of so-called "parachute payments" to help ease those losses. While the exact amount of those funds is unknown, they are believed to be fairly significant, and might even be increasing with the Premier League's huge new TV deal that kicked in this season. If it was deemed necessary for balance purposes, a similar type payment could be made to the Championship playoff runner up to help them field a B team.

Also of help for the clubs involved is a boost in ticket revenue. The B teams' 23 home matches per season would be held in their parent clubs' home stadiums, which in and of itself provides a large boost in revenues compared to a handful of Reserve matches in a secondary facility. It's not likely you'll ever see Anfield or Old Trafford sold out for a League One match, or Villa Park or the Boleyn Ground sold out in League Two, but you will see healthy crowds and ticket income, not to mention more employment revenues for the people who work concessions, merchandise, and other duties at the stadiums on gamedays. The potential for additional sponsorship revenue cannot be ignored either.

The biggest objection encountered when this subject has been one of tradition. People are terrified that getting B teams of big clubs will somehow wipe away or cheapen the histories of smaller English clubs. Under some previously proposed models, that makes a degree of sense; having big clubs buy out smaller clubs or shoehorning B teams in to existing league setups without structural adjustments would have a detrimental affect. This proposal, however, one that puts the B teams alongside the current leagues without truly disrupting them, should achieve a happy medium that eventually satisfies everyone.

There is a potential lingering issue with having the B teams outside the promotion and relegation battles, however. A risk exists that other clubs wouldn't take matches against them seriously, that their matches would wind up as glorified reserve tilts in and of themselves. However, as all points earned in their matches still count, it would still be vital to put out a good squad against them and push for the win no matter what, because your rivals will certainly be doing the same. As long as both clubs treat their matches professionally and competitively, which there's no reason to think they wouldn't, there shouldn't be any significant concerns on that front in the long run.

Regardless, it's likely that traditionalists would be in an uproar. Moving League One and League Two to 36 team formats with three divisions apiece is a big change, but one designed to have as small of a long-term impact as possible. The number of matches stays the same as it is now, and the promotion structure is essentially the same as it is now, with a small allowance to account for the divisional structure when determining playoff teams. Once the shock has had a year or two to wear off, it's feasible that those same traditionalist fans will embrace and enjoy the opportunity to face off against the heavy-hitter clubs, even if it's not quite the same as playing their senior squads.

For the Premier League and Championship squads that have B teams, the benefits are obvious. Significant competitive minutes for young players and under-utilized fringe first teamers would be a major plus, and keeping Academy graduates who aren't yet good enough for the first team in a club-controlled training environment for as long as possible can only be a good thing when it comes time to integrate them in to the first team.

As for who would be eligible, all non-registered players on the club's payroll (U21's and Academy players) are automatically eligible. Additionally, any player registered to the senior squad who was not in the club's most recent matchday squad (starting XI plus the bench) is eligible for inclusion, but with the caveat that if they are activated for a match with the B team, they are ineligible for their club's next senior squad match. That mechanic would be in place to prevent too much abuse of "shuttling" players back and forth between the squads. There could also be a requirement for a certain number of players signed just for the B team, but that would be a low number (probably no more than six) so as to minimize any additional financial burden to the parent club.

The placement of the B teams in Leagues One and Two would even allow for the loan system currently used in England to continue, despite some people's concern to the contrary. Not every younger player short of the first team is going to fit in the league their parent club's B team is in, so a loan to the appropriate level is still perfectly in play.

Also, the Reserve system as it currently stands would still be there for the rest of the English league system to partake in. The B teams replace the Reserves for the clubs who have them, but if and when they lose eligibility to have a B team, they'd revert back to have a plain Reserve team and all the loveliness therein.

In the end, it's a complex and difficult proposal to get through, but it at least appears to be an effective one. With more roster spots for players, more money for the leagues, clubs, and FA to be had, and more development opportunities for home-grown players, everyone involved comes out ahead. The fans of smaller clubs would be more difficult to convince of the benefits of this system, but given time they could come around. A move like this could do a lot to start advancing England past their rivals again, both at the club and international levels.