As Liverpool head towards the ever-chaotic holiday period, their injury situation is... not any better, in reality.

December is always an interesting month in the English Premier League. The top clubs are wrapping up their Champions League groups, the Europa League clubs are doing the same, and everyone is girding for the always-insane holiday period, when matches come thick and fast for everyone.

For Liverpool, things start off with a hopefully-easy match against Sunderland, though Gus Poyet's crew took Chelsea to the brink last weekend in earning an impressive draw. That's quickly followed, though, by a win-or-you're-out match against Basel in the Champions League that will determine if Liverpool advance to the Champions League knockout rounds... or deal with the drudgery of the Europa League.

A trip to Old Trafford and Manchester United is on the cards the next weekend, and then the holiday period gets truly underway; a trip to Bournemouth for League Cup action is followed by a visit from Arsenal the weekend before Christmas, then Boxing Day sees Liverpool away at Burnley. The following Monday then has Liverpool hosting Swansea City, and hopefully by then the club isn't limping and licking wounds.

Making this period difficult is that this side is still struggling mightily with injuries. Daniel Sturridge is still out, as to is Mario Balotelli. Suso and Jon Flanagan may return by the end of the month, but that's a big "if" right now. Making things more interesting is that apparently Philippe Coutinho and Jose Enrique are carrying knocks from recent action, leaving their availability in some question against Sunderland.

In somewhat happier news, Liverpool may soon get Mamadou Sakho back. Dealing with the lack of form on the back line has been harder with very little center back depth to work with, so getting the intimidating Frenchman back will be a boon to Liverpool's defense. Of course, we all thought he was about ready to return a month ago. That didn't so much work out well.

Making things interesting for the purposes of putting this feature together has been Brendan Rodgers' recent use of Steven Gerrard further up the pitch than we've grown used to seeing him overt the past year. That's allowed Liverpool to deploy a sturdier defensive base in midfield without taking their captain off the pitch, and at least on paper leaves the side better balanced. We'll see how long this change lasts, but for now at least it seems promising. 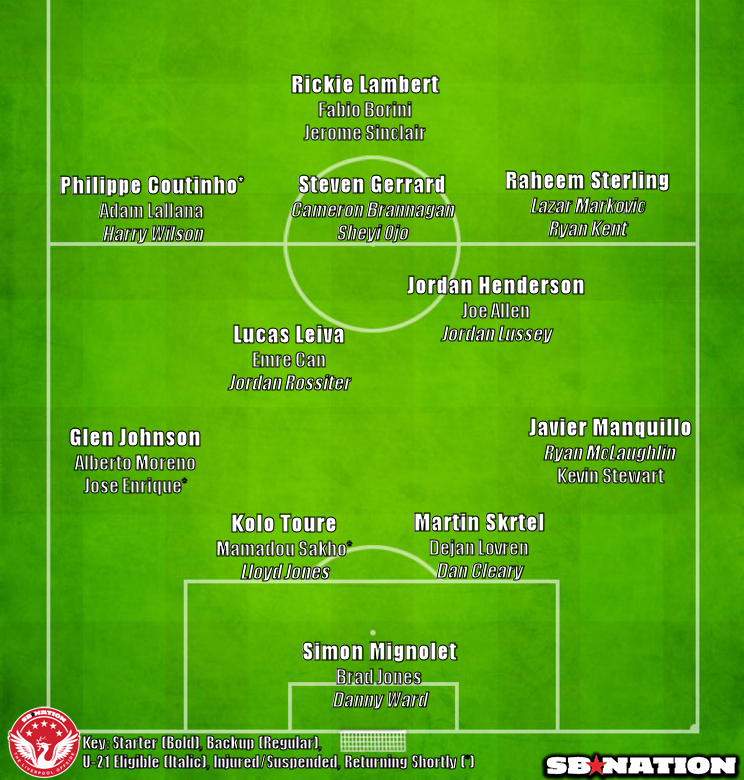