The holiday period has not been kind to Liverpool's depth chart.

This past month may have had a number of good results for Liverpool, including a spell at the top of the table, but it has been hard on the roster. A close run of tough matches took a toll on the squad, and it's left a number of players on the training table.

As a result of Steven Gerrard's injury, Brendan Rodgers has shifted to something closer to the 4-3-3 that he once used at Swansea City, and with it has come the re-emergence of Raheem Sterling, and he's come in to absolutely sparking form as a result of it. Gerrard coming back to health shouldn't change the formation overmuch for the time being. Obviously once Daniel Sturridge is fit again that will change, but for time time being it can stay as-is.

The problem is that there is just no depth right now. Up front, Iago Aspas and Victor Moses are the only available backups, and both are so out of form it's painful to watch them play. In midfield, the injury to Joe Allen has left the depth to a bunch of kids from the reserves and Academy.

Along the backline, it's worse. Jose Enrique is still out for awhile, and while John Flanagan has been in tremendous form, now he's out for a so-far unknown amount of time. That means Aly Cissokho is back in charge on the left flank, with Brad Smith behind him. Mamadou Sakho's injury means a return to the "Skagger" center back pairing, but only with Kolo Toure to serve as proven depth. On the right, there's an out of form Glen Johnson and... huh. Yeah, that seems to be it. Martin Kelly seems to be made out of hopes and dreams at this stage, and Ryan McLaughlin has yet to even make a senior squad bench.

Suffice it to say, things are a little nervy. The rest of January will be a bit easier as far as pacing of matches, with four more matches currently on the books (with a potential for a fifth if Liverpool beat Oldham on Sunday). The toughest match will be against Everton at Anfield at the end of the month, though an away trip to Stoke won't be a picnic. The current squad should be strong enough to take almost all of the points available, and hopefully they'll be able to limp through without further injuries while getting a couple folks out of a very crowded training room. 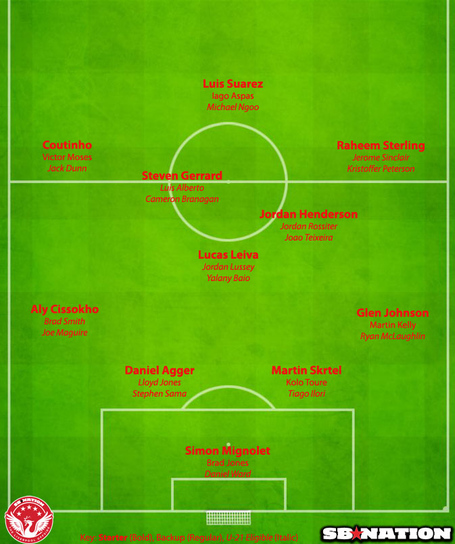