Liverpool were exceptionally poor yesterday, and the Southampton winner--a well-placed header from Dejan Lovren--was a failure in two parts by Brendan Rodgers' squad.

Having started the season full of confidence and competence, Brendan Rodgers saw his Liverpool side stumble badly against Southampton yesterday, conceding not only the upper hand in the match but a sloppy winner from a corner. The visitors were deserved winners, as we've discussed, but their go-ahead goal in the 53rd minute was also a product of two calamitous sequences from their hosts--first to give up the corner kick that led to the goal, and then, as we've seen so all too frequently in seasons past, in failing to adequately defend a straightforward set piece delivery.

To set the stage, Raheem Sterling had just won a throw-in with a burst down the right, and Kolo Toure picked out Jordan Henderson, who immediately returned the pass to the makeshift right-back. Toure had few options forward, so he dribbled back into Liverpool's half, where Martin Skrtel was his only outlet near the touchline. 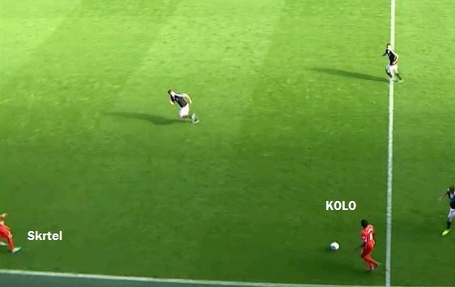 There aren't any Southampton players between Skrtel and goal, though as they did for much of the day, their forward line and midfielders will press aggressively high up the pitch. This caused problems throughout Liverpool's defense, with two fullbacks that aren't really fullbacks, a half-fit Daniel Agger, and Skrtel, who's never been the most comfortable with the ball at his feet. 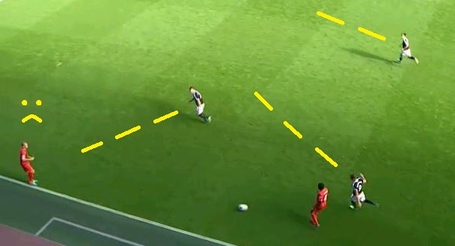 So Toure opts for the pass to Skrtel, and Southampton pressure both the ball and the forward space. Skrtel will still have an outlet to Mignolet, but something he should probably not do is turn into a statue and watch the ball roll out of play while Southampton are aggressively getting men forward and Liverpool are still recovering from what they thought would be a spell of possession. 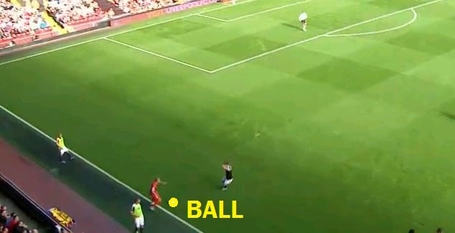 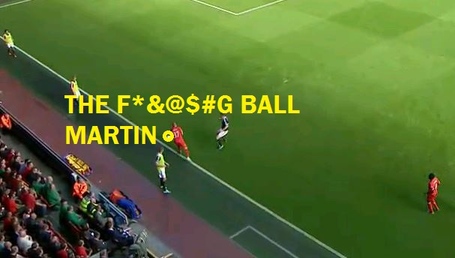 Right, so maybe not such a great idea. Pressure on Skrtel equals panic, and soon enough we're looking at a sloppy giveaway in what had become an increasingly sloppy performance from Liverpool.

Southampton's throw causes a slight problem for Liverpool given the numbers, but Toure recovers in time to punch a dangerous pass out for a corner. That's no saving grace, however, as despite their successes to this point in the season, Liverpool have proven incapable of consistently defending set pieces with any sort of competence. Ever.

Daniel Agger is marking Dejan Lovren with Steven Gerrard at the near post, and those three will prove to be the important figures as Southampton get their winner.

Lovren creates space between him and Agger, and it's the continuation of a worrying trend for the Danish defender. Agger acknowledged that he probably wasn't fully fit yesterday, but he's been pretty poor when it comes to staying with his man on set pieces over the past few seasons. Maybe it was fitness yesterday, or maybe it was just the fact that he's not been good enough on a consistent basis.

That space allows for Lovren to get around Agger on the goal side, and the physicality used by the Croatian--all completely legal and etc.--proves too much for Agger to recover. 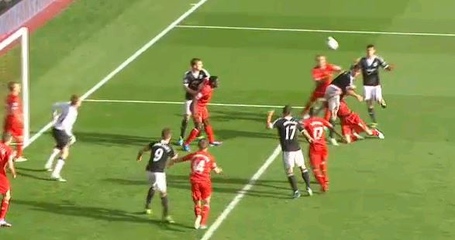 At this angle it looks almost impossible for Lovren to score, but between Agger's inability to mark, Gerrard retreating too far into the goal and clearing only into the roof of the net, and near-perfect placement with the header, it's a deserved Southampton winner and a goal from which Liverpool couldn't recover. Set piece defending. Let's practice it.