Daniel Sturridge made his first start in an England shirt and promptly received a Glenn Whelan boot to the ankle, leaving the Liverpool striker on crutches and facing a period of recovery over the next few weeks and months.

We didn't even manage to make it to the summer internationals that pretend to mean something before we got our first bad news for Liverpool's squad; talk of a possible Luis Suarez transfer compounded what was to become a fairly miserable afternoon for the club's strike force, with Daniel Sturridge hauled off on 33 minutes because of an ankle injury. It was an unfortunate turn for a player who finally seemed set to take advantage of his chance for the national team, and now he'll possibly be looking at an extended spell of recovery and recuperation.

The match was notable for very little other than providing exactly what you'd expect from a side led by Roy Hodgson; the former Liverpool manager's deftest move was comparing his England setup to that of Jurgen Klopp's Dortmund, noting that they both play 4-4-2 and manage to do so in similar fashion. Long-time followers of the manager with 30+ years of experience across the continent will probably know a bit better, though a draw with Ireland has to be seen as one of the more famous results along England's path to an exit in the first knockout round of next summer's World Cup.

More worrying than the next brave Three Lions failure is the impact today's proceedings will have on Sturridge's preparations for the 2013-2014 season, which will see him set to lead Liverpool's attack in the opening months regardless of whether or not Suarez sticks around. With six matches left on his ban, the Uruguayan wasn't going to have a say in Liverpool's first few matches anyway, with that responsibility falling to the man who did so mostly to positive effect over this past season's final month.

We'll have to wait and see, but with the striker posting a photo of himself in a medical boot and on crutches, it's hard not to feel at least a little concerned about his prospects for a full preseason with Liverpool. 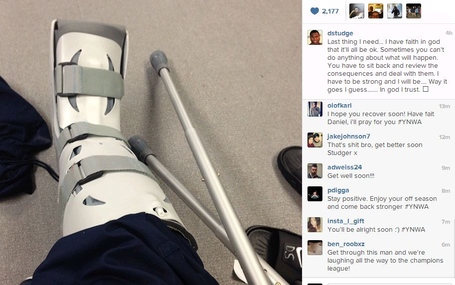