We're down to the final four and the last week of voting for the most important Liverpool player of the Premier League era, and two of John Barnes, Ian Rush, Jammie Carragher, and Steven Gerrard won't be going any further.

After kicking things off two weeks ago with 64 players we're down to only four as we start the final week of voting to determine the most important Liverpool player of the Premier League era. The favourites have come out on top more often than not along the way, but that doesn't mean there haven't been some painful decision to make and a few surprises.

To take a look back at the results of the Elite Eight you can head back to last week's final round of voting, and as always the full bracket can be found over on Oh You Beauty. And when it comes to the Final Four pairings, you have until 12 midnight GMT/7PM EST on Wednesday to make your vote count—with votes restricted to one an hour for those looking to give a little extra help to their favourites. 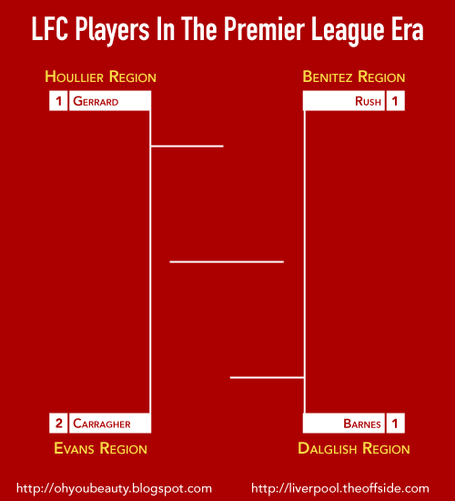 The Houllier and Evans regions have offered up two players who have defined the current millennium for the club. Both graduates of Liverpool's academy and set to retire as one-club men in an age when such a feat is almost unheard of, that Steven Gerrard has made it all the way to the Final Four in a competition to determine the most important player of the Premier League era will come as a surprise to no one.

Gerrard has so far made over 600 appearances in his Liverpool career and scored 150 goals—and he could have a few good seasons left in him yet. He has won the League Cup three times, the FA Cup twice, the Community Shield and UEFA Super Cup twice, and in 2005 the Champions League. He has also been largely unchallenged in our search for the best Liverpool player of the past 20 years, with only Sami Hyypia amongst his opponents managing to take more than ten percent of the vote.

Carragher, on the other hand, has had a much tougher road to the Final Four. On the pitch he may have a similar list of honours to go with an extra hundred appearances—though with a few less goals than Gerrard—but after trouncing Igor Biscan and Yossi Benayoun in the opening rounds, he had to fight hard to upset Robbie Folwer by only a handful of votes in the Elite Eight. Few will likely be giving him a chance to follow up that upset by knocking off Gerrard, but then few would have given him a chance to beat Fowler, either.

On the other side of the bracket, the Benitez and Dalglish regions see a pair of players who made their names in the 80s and 90s competing for the chance to head to the final against either Gerrard or Carragher. Despite both being top seeds, though, neither's path has been completely worry free—though Rush has looked the more comfortable of the pair in defeating Craig Bellamy and Fernando Torres.

The Welsh striker may have had his best years at Liverpool before the Premier League came into existence, but from 1992 to 1996 he was still an important player for the club. He led the team in scoring in 92-93 and 93-94 while pairing the likes of Nigel Clough and Robbie Fowler, and in 1995 won his fifth League Cup for the club. The arrival of Stan Collymore later that summer, though, would signal that Rush's Liverpool career was nearing its end.

Barnes lasted a season longer at Liverpool than Rush, and a move into the midfield helped to prolong his career at the club in a role that grew increasingly reserved as the years passed. By the end, he was captaining the side from a deep lying playmaker role and providing leadership both on and off the pitch for a side struggling to redefine itself. He narrowly defeated Steve McManaman—the player who displaced him on the wings—to make it to the Final Four.