After the closest finish of the competition capped the second half of Sweet Sixteen voting, we move to the Elite Eight, where seven of the eight top seeds square off.

We're moving ever closer to a conclusion in Liverpool March Madness, and we're barely through what was easily the most challenging set of votes yet. The Sweet Sixteen--part one can be found here, while part two is located here--saw some tough, tough choices laid out, with a number of sentimental favorites facing off against one another in a series of impossible-seeming scenarios.

There were a handful of overwhelming victories, as Steven Gerrard, Robbie Fowler, and John Barnes each earned over 95% of the vote in their wins, but Fernando Torres, Steve McManaman, and Sami Hyypia had to rely on late surges to push past their opposition. Jamie Carragher eventually overwhelmed Dietmar Hamann in what had been a close matchup, and in the most competitive pairing of the round, Ian Rush defeated Luis Suarez by less than a percentage point.

It doesn't get any easier today, with 1-2 matchups in three of the four regional championships and a 1-3 in the fourth. As always, you can look back at the full bracket over at Oh You Beauty, and the results from the two parts of the Sweet Sixteen matchups can be found here and here. Elite Eight voting will run until kickoff against West Ham on Sunday. 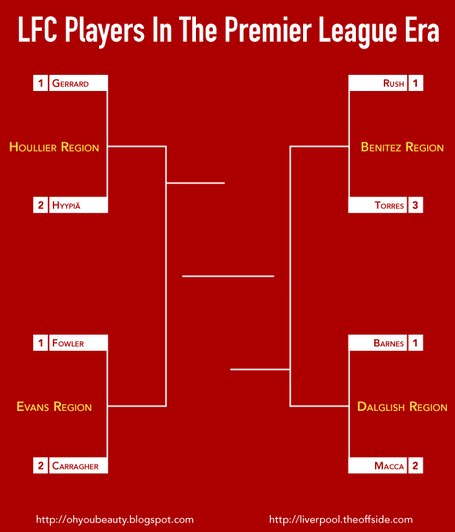 It's been an easy road for the number one seed in the Houllier Region, as Steven Gerrard has cruised past Djimi Traore, Vladimir Smicer, and, perhaps a little surprisingly, Pepe Reina by an overwhelming margin. His place in the Elite Eight was likely always a certainty, of course, and if he doesn't find his way into the Final Four and Championship it'll take a massive upset.

His opposition here could provide a sentimental challenge, though, as there really aren't any compelling arguments to vote against Sami Hyypia. His matchup with Xabi Alonso in the last round provided his toughest test yet, and while it'd be a shock to see him overtake Gerrard, the respect he's earned both as player and cult hero for Liverpool could very well be enough to seriously challenge the number one seed.

For my money, this one's the most impossible of the round. Both rightfully respected as Liverpool legends, and both victors in the previous three rounds by relatively safe margins. Fowler hasn't seen anyone within view in the rear-view mirror through the competition's first three rounds, with Joe Cole, Peter Crouch, and the impressive Gary McAllister putting up little fight.

It was a different story for Jamie Carragher in the Sweet Sixteen, where he had a nervy time with Didi Hamann before eventually earning just over 60% of the vote. His late run of form leading up to the eventual May 19th sendoff at Anfield is about as emotionally charged as it gets for one of the club's finest servants, and could be more than enough to see him edge past Fowler into the Final Four.

One-time kindred spirits face off in the third Elite Eight matchup, where the club's all-time leading goalscorer meets the man who many had hoped would put together a similar type of Liverpool career. Ian Rush was class from start to finish in his playing days and has managed to maintain his status as a club favorite with frequent Anfield appearances and an ambassadorial role, while his opponent has only recently faded from the collective consciousness as public enemy number one.

Few will give Fernando Torres a chance, and it's a stretch to think he'll put up much of a fight against an icon like Rush. But I don't think I'm alone in feeling something slightly more positive towards the much-maligned Spaniard over the past few months--though it's probably just pity given the dismal form he's experienced since moving to Chelsea and the unrelenting abuse their supporters have sent his way, but it's not quite the strong resentment and sense of betrayal from two years ago. I mean, I'm voting for Ian Rush a bunch though, so...yeah.

The final 1-2 matchup of the round pits two of the club's best players from the eighties and nineties; John Barnes is one of Liverpool's best-ever wide men, the last true goalscoring threat they've had for over a decade and a half, while McManaman followed closely in the footsteps and benefited from the mentorship of the man he now faces with a trip to the Final Four on the line.

What leans in the favor of McManaman is the actual Premier League resume--Barnes' glory days in a red shirt came prior to the formation of the top flight as we now know it, while his understudy flourished with the league fully formed. I don't know that it pushes Barnes out of the competition, but there's certainly a case to be made for the floppy-haired, skinny-legged winger that brought Liverpool some of its finest moments during the nineties.