Suarez Named in PFA Team of the Year, Second in POY Voting

Luis Suarez ended up featuring in the PFA Team of the Year and came in second to Gareth Bale for the Player of the Year, but the Uruguayan's honors were overshadowed by the booing of the mean girls and boys that attended the ceremony. Luckily, they left behind their Burn Book.

Share All sharing options for: Suarez Named in PFA Team of the Year, Second in POY Voting

I'm still at a loss for what to tell my child about what's gone on over the past few weeks. It'd be nonsense to try to explain to him that, while we all have thoughts or feelings or urges that we're not proud of and might even be so bizarre as to be criminal if we acted upon them, some people don't cope very well with said thoughts/feelings/urges as well as others and impulsively act in ways that aren't consistent with the type of person that they'd like to be. Instead I've been searching for any media outlet that'd have me so I can wonder aloud about what to tell my child instead of actually having a conversation with said child.

Thankfully we have the blog, and I can ignore both my child and the fact that telling others about my inability to express proper sentiments to my two-year-old is really just an entirely selfish statement about how hard other people make it for me to have a difficult conversation with someone who doesn't have a fully-formed brain. I mean, moral outrage and stuff, guys, right?

That inability to act like an adult apparently extended to the PFA Awards ceremony last night, where Luis Suarez was nominated for the Player of the Year. He didn't win, coming in second to Gareth Bale despite the gramatically atrocious efforts of Wayne Rooney, but he did manage to make the Team of the Year, an honor that'll be overshadowed by the fact that the selected eleven has a black hole of a midfield and that Suarez bit Branislav Ivanovic last weekend. Also, that professional adult(ish) footballers--along with writers, coaches, hangers-on--booed Suarez openly when his name was announced. Yes, he's the one with most of the problems.

Luckily amidst the pomp and circumstance and self-importance of an awards ceremony that doesn't really mean anything to anyone the PFA representatives left behind their Burn Book, which Liverpool Offside associates were able to get their hands on.

Special thanks to Elizabeth for the photographic retouching. 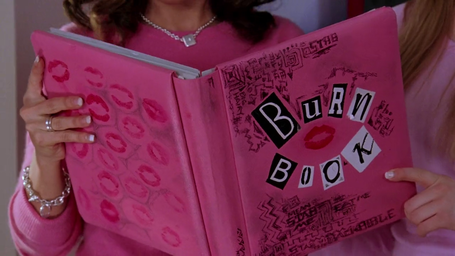 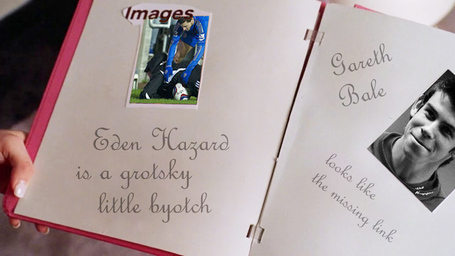 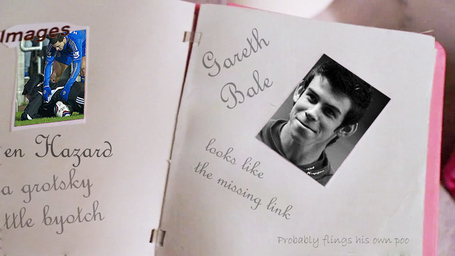 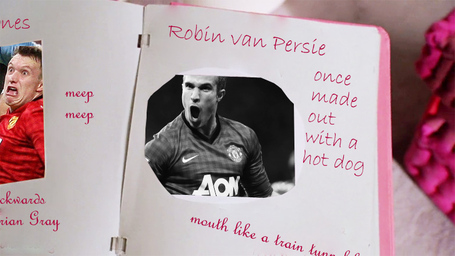 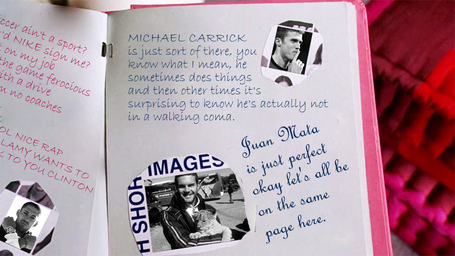 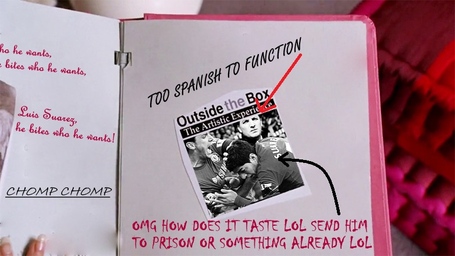 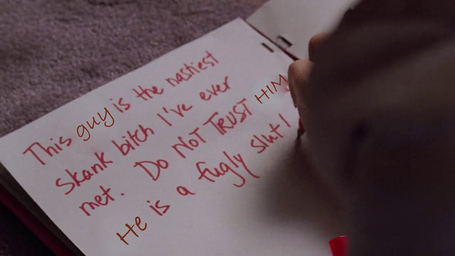 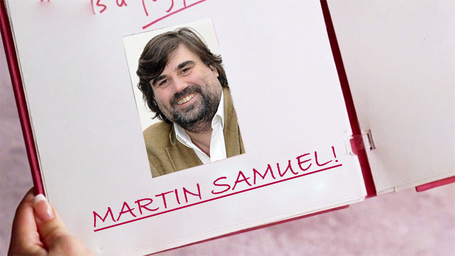