We're down to the final in Liverpool March Madness, with the man who has defined the club during the past decade going up against Liverpool's best from the 80s and 90s.

As we reach the end of our third week of voting we've whittled 64 names down to two in our search for the most important Liverpool player of the Premier League era. Some of the choices have been easy, and a few have been so tough as to seem as though there was no right answer. Along the way, Liverpool legends like Sami Hyypia, Robbie Fowler, and Jamie Carragher have been sent packing.

And now, for the final, it's Liverpool's greatest current player against the man who was arguably the club's best throughout the glory days of the 80s and well into the at times uncertain 90s. For the final, it's Steven Gerrard v. John Barnes. You have until kickoff against Reading on Saturday to make up your minds, with voting allowed once per hour. 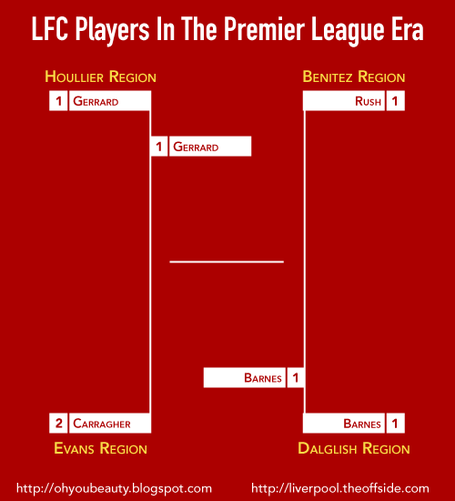 Nate of Oh You Beauty

On one side, the man everyone knew would be here. As if there was ever any doubt. Liverpool's current captain. A player who dragged the side to the Champions League Final in 2005, who almost singlehandedly won the 2006 FA Cup Final, who has been the definition of "Liverpool FC" for more than a decade. A man who's lifted 11 trophies at Liverpool, every possible trophy except the Premiership. 626 appearances, 159 goals. Number eight in your programs, number one in your hearts, Captain Fantastic, Steven Gerrard.

Which isn't to downplay the achievements of the player opposite him in the bracket. John Barnes started at Liverpool as a thoroughbred winger, gliding up and down the touchline, setting up and scoring goals. It took him nine minutes to register his first Liverpool assist; on his Anfield debut, he created one and scored one in a 2-0 win. Incidentally, Liverpool won the league that season.

By 1993, after a spate of injuries, Barnes had transformed himself into a central midfielder, a metamorphosis few are able to make. 163 of his 407 Liverpool appearances came during the Premiership era, 27 of his 108 goals. He made 50, 50, and 47 appearances in his final three Liverpool seasons, captaining the side in his last campaign, before being allowed to join Newcastle on a free transfer. Barnes was the best player in arguably Liverpool's best ever side, and is deservedly still remembered as one of finest to put on a Liverpool kit.

Ed of the Liverpool Offside

There's an argument Liverpool's current captain is not only the club's best of the Premier League era, but maybe even its greatest-ever player. He's won nearly everything a player can win at the club level, becoming the only player to ever score in the Champions League, UEFA Cup, FA Cup, and League Cup finals and occasionally dragging the club to wins in matches against opposition they had no business beating along the way. His flirtation with an exit after the 2004-2005 season temporarily damaged his legacy, but his re-commitment and devotion to the only club he's ever played for is now unquestioned.

During the past few seasons—some of the most tumultuous for the club in the Premier League era—he's become more vocal and visible as a leader, and as his career winds down there's more than a little hint of generativity to what he's doing. Established as an individual great, he's helping lay the foundation for what will hopefully become a brighter future. Liverpool have had some greats, no doubt, but when it comes to the Premier League era, the discussion about their best starts and ends with Steven Gerrard.

Noel of the Liverpool Offside

Most will expect Gerrard to waltz to victory yet again, dispatching John Barnes as easily as he did first Sami Hyypia in the Elite Eight and then Jamie Carrgher in the Final Four. And if he does, it will do nothing to dampen the Barnes' legacy. Yet for those unable to separate their time spent at Liverpool during the Premier League from what came before, for those unwilling to draw an invisible line through 1992 as Sky and so many in the English media so love to, the contest between Gerrard and Barnes will be far from clear cut.

Amongst players who have played for the club during the Premier League era few can match Barnes' achievements. At his peak, Liverpool won the league and FA Cup twice, and many believe it was only the European ban that kept a side Barnes was the best player on from similarly impressing on the continent. Barnes has also represented Liverpool impeccably since retiring, a compelling voice of reason and insight in a landscape littered with pundits and ex-players doing little positive to stand out. Gerrard has been the club's best for a decade; Barnes was its best at a time when Liverpool were the top side in England and continues to endear himself to fans to this day.