Our third group sees us moving on to the Rafa bracket, featuring some of the club's most sensational strikers, fan favourites, and a few emotional elbows to the face.

Moving into the second half of the opening round, the Benitez Regional brings us top seeded Ian Rush as well as a handful of fan favourites and a few not so fan favourites. As with the other regions, click the image below for a larger version of this round's match-ups or visit Oh You Beauty for the full bracket, and remember that the Evans and Houllier Regions are still in play. 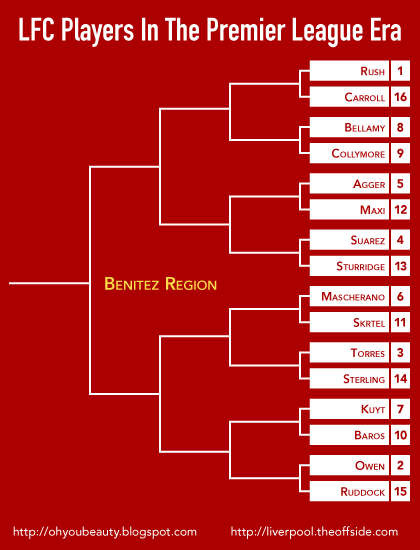 Liverpool's all time leading goal scorer may have figured most prominently during the club's 1980s trophy sprees, but his four seasons spent in red after the formation of the Premier League ensure he remains top seed in this bracket. Besides holding additional goal scoring records in the FA Cup, League Cup, and internationally with Wales, Rush's talent for scoring against Everton is second to none and inspired the Kop to immortalize his efforts against the Toffees in song.

With a €35 million millstone around his neck, Carroll struggled first to find fitness and then a place in the side, ultimately doing neither all that successfully. A League Cup winner with the club in 2012, Carroll was loaned to West Ham this season where his injury woes and disappointing goal scoring record have continued.

Owen's numbers speak for themselves: 158 goals in 297 Liverpool appearances in all competitions. Receiving numerous Player of the Year accolades for his role in Liverpool winning a treble in 2001, Owen won an additional League Cup the following year. A lack of connection to a passionate fan base and an eventual transfer to Manchester United add an unsightly blemish to a generally successful stint on Merseyside.

As a member of the infamous "Spice Boys," Ruddock is more know for his controversial off-pitch antics involving tabloid drama and run-ins with the law than he is for positive contributions on the pitch. Ruddock won the League Cup with Liverpool in 1995.

An instant hero after forming a partnership with Stephen Gerrard that saw Torres score 24 goals his first season in red, Torres went on to score 65 goals in 102 league appearances for Liverpool. A record-setting transfer to Chelsea in January 2011 significantly tarnished his reputation amongst fans, but it remains to be seen if time heals all wounds.

After causing a stir in the Academy, Sterling burst straight into the starting eleven in 2012 and scoring two goals in twenty-three league matches. Overplayed in the first half of the season, Sterling's development is now being nurtured to avoid exhaustion and burn out.

Controversial but never boring, Luis Suarez hit the ground running upon his transfer in January 2011 and immediately impressed with his ability to make goals out of nothing. A lengthy suspension in his first full season put a damper on his performance, but the striker roared back with such a strong run of form this year that has many wondering whether the best is still yet to come. Suarez has scored 50 goals in 92 appearances for the club, and was a part of the League Cup winning team in 2012.

Sturridge transferred to Liverpool less than three months ago and immediately made himself indispensable in the starting line-up, forming a quick understanding with Luis Suarez and scoring three goals in his first three matches. Early returns have won over skeptics, though as with any new transfer it is yet to be seen what his legacy might be.

Agger's eight seasons at Liverpool have often been marred by injury, but his leadership, fierce loyalty, and commitment to keeping opposition players honest has made the centre back a candidate for the captaincy once Steven Gerrard retires. Agger has won a trio of trophies with the club -- the FA Cup, League Cup, and Community Shield -- and has volunteered to tattoo the entire team should they win the elusive Premier League title.

A member of Liverpool's 2012 League Cup winning side, Rodriguez spent two-and-a-half seasons with the club, netting not one but two hat tricks during his first full season. Maxi struggled to break into the starting line-up regularly in his second season and eventually chose to return to Newell's Old Boys, where he'd come up through the youth system.

Mascherano spent three-and-a-half seasons at Liverpool, culminating in a Champions League run that saw him named man of the match by the club's fans for his play in the competition's final. Mascherano also holds the more dubious honour of having the worst discipline record in the league in 2009-10, with seven yellows and two reds.

A regular starter in the side for the majority of his time spent at Liverpool, Skrtel's solid pairing with fellow defender Daniel Agger helped lead the former to win the club's Player of the Year award in 2011-12. Skrtel also won the League Cup that same year, but a dip in form has seen him fall out of favour under Brendan Rodgers.

Defining the terms "dedicated servant to the club" and "tireless workhorse," Kuyt is one of few players to have earned the privilege of being called an honourary Scouser. Kuyt was Liverpool's top scorer in 2010-11, and reached three cup finals with the club, scoring in the League Cup final to temporarily put them ahead in a match they went on to win after penalties.

As a member of the team that won the 2005 Champions League, Baros will best be remembered for his run of form as first choice striker that helped lead the club to Istanbul. Baros was joint top scorer that same year and won the League Cup during his first full season with the club.

A man of many teams, Bellamy spent two single-season spells with Liverpool, the second of which saw him play an important role in propelling Liverpool to the League Cup final. Popular for his sometimes controversial personality, Bellamy's dodgy knees ultimately held him back from being able to contribute for more than 70 minutes a match.

Spending only two seasons at Anfield, the controversial striker scored twenty-six goals for the club, helping them to an unsuccessful FA Cup final in 1996 and a third place finish in 1996-97 before moving on to Aston Villa.