Continuing our March Madness-inspired search for the most important Liverpool player of the Premier League era brings a second group of sixteen including Robbie Fowler, Jamie Carragher... and Joe Cole.

Yesterday saw us kick things off with the Houllier Regional, where you can continue to vote for or against the likes of Gerrard, Hyypia, and Alonso. Today, we continue with the Evans regional, including Liverpool legends like Jamie Carragher and Robbie Fowler—along with a sacrificial Joe Cole or two.

Click the image of the bracket to take a closer look at the match-ups or head to OYB for the full 64, then scroll down for a brief recap of each player's achievements and to leave your vote for who you think should advance. 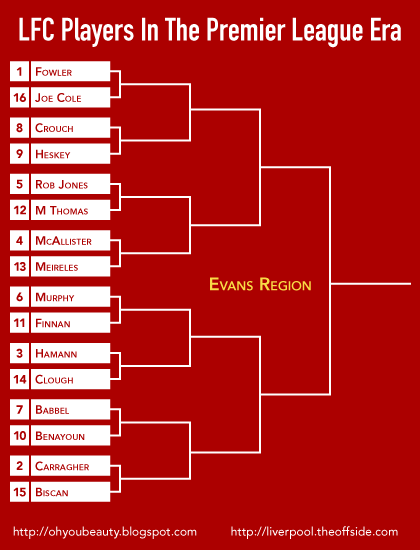 He wasn't the biggest, strongest, or fastest—he just scored goals. Though he grew up supporting Everton, he joined Liverpool's youth team when he was sixteen. Two years later, he was a first-team fixture, ending his first season the club's leading scorer. After spending time away at Leeds and Manchester City, he returned in 2006 and in total recorded 183 goals in 369 appearances in his Liverpool career.

The Joe Cole Liverpool signed in 2010 was a ghost of his former self and struggled to live up to his reputation or, in the view of most fans, do enough to justify the contract he was on. There may have been a few bright moments along the way, but in the end both club and player were happy to part ways.

Carragher was another boyhood Evertonian who will go down as a Liverpool legend. His 700+ appearances stand him second all time amongst Liverpool players, while his 150 appearances in Europe are a club record. He has won two FA Cups, three League Cups, the UEFA Cup, and the Champions League as a 17-year, one club man.

Biscan was signed as a midfielder but ended up Gerard Houllier's favourite utility player, filling in across the defence and on the wing as often as he played at his natural position. With the arrival of Rafa Benitez, Biscan returned to midfield and was involved in Liverpool's run to the Champions League final—though he remained an unused substitute in Istanbul.

The Didi Man spent seven years at Anfield, playing a role in 2001's cup treble and capturing another FA Cup winner's medal in 2006 before moving on to Manchester City. In between, he played a key role in Liverpool's Champions League victory when he came on at the half—and later scored in the penalty shootout—with a broken toe. He has stated that his dream is to one day manage the club.

Clough spent three seasons at Liverpool in the early days of the Premier League, his early promise undone by a drop in form halfway through his first season at a time when Robbie Fowler was breaking into the first team. After two more largely frustrating seasons, Clough left in search of greener pastures.

McAllister arrived on a free at the age of 35 and only spent two seasons at Liverpool, but without him it's impossible to imagine a cup treble in 2001. His performance was key in turning the tide against Arsenal in the FA Cup final, while in the UEFA Cup he scored the semi-final winner against Barcelona and had a hand in three of Liverpool's five goals in a wild 5-4 final victory over Deportivo Alaves.

The Portuguese midfielder's similarly brief time at Liverpool saw him the lone Hodgon-era signing fans took to and a key to Kenny Dalgish's revival of the club's fortunes. He was deemed surplus to requirements when a contract impasse and the arrival of Charlie Adam combined to push him out of the club.

The Welsh fullback spent most of the 90s protecting Liverpool's flanks but shin splints, back problems, and finally a knee injury cut short his career. Before retiring at the age of 27, he played a key role in Liverpool's FA Cup triumph in 1992 and League Cup triumph in 1995. Though he never scored for Liverpool, Steve McManaman called him the best defender he had ever played with.

Thomas made 126 appearances over seven seasons at Anfield, with his best moment coming early on when he scored the winning goal in 1992's FA Cup triumph over Sunderland. However, injuries soon relegated him to the fringes of the first team, where he lingered until 1998.

The Irish right back established himself at Liverpool in 2004-05, just in time to help the club to the Champions League final in Istanbul though he was forced off at the half with a thigh injury. The arrival of Alvaro Arbeloa in 2006 eventually pushed Finnan down the pecking order and away from Anfield.

Babbel played an integral role for Houllier's Liverpool, marauding down the right and scoring the first goal in 2001's UEFA Cup final victory over Alaves. Unfortunately, when Babbel contracted Guillain-Barre syndrome it effectively ended his Liverpool career. He returned to action after a year away from football but was forced to head to Blackburn on loan and eventually returned to Germany.

The Israeli supersub spent three seasons at Liverpool, playing in 134 games and scoring 29 goals. In the end he left in search of more regular playing time, but before then he contributed key goals in Liverpool's runs in the league and Champions League in 2009.

The towering Crouch spent three years at Anfield, gaining a reputation for having a good touch for a man standing 6'7". Though it took him more than 24 hours of football to score his first Liverpool goal, he ended his second season the club's leading scorer before finding playing time harder to come by with the arrival of Fernando Torres.

Heskey played four seasons at Liverpool under Gerard Houllier, arriving as the club's then-record signing. He would go on to score 60 goals in 223 appearances, facing criticism at times for what seemed a low goals per game return for a striker. Before he left for Birmingham City he took home winners medals in the UEFA Cup, FA Cup, and twice in the League Cup.