Join us as we hop on the March Madness bandwagon and vote our way down to the most important Liverpool player of the Premier League era, starting with a group including the likes of Steven Gerrard, Sami Hyypia, and Xabi Alonso.

Today we kick things off with 16 names in the Houllier Regional, led by current captain Steven Gerrard and including the likes of Sami Hyypia and Xabi Alonso. Click the image of the bracket to take a closer look at the match-ups or head to OYB for the full 64, then scroll down for a brief recap of each player's achievements and leave your vote for who you think should advance. 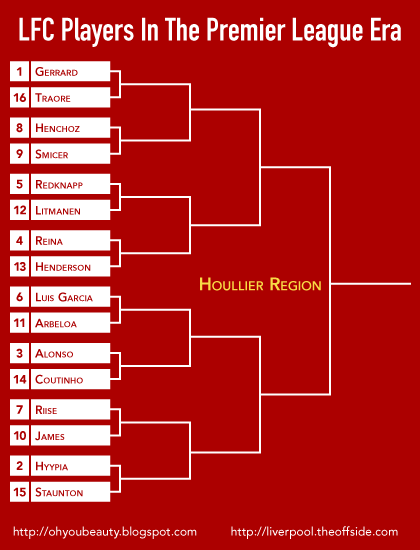 Captain, talisman, local hero, and permanent fixture near the top of any list purporting to detail Liverpool's best and brightest. Gerrard has now captained the club he grew up supporting for ten years, recording more than 150 goals in over 600 appearances, leading Liverpool to the League Cup three times, the FA Cup twice, and the Champions League trophy along the way.

At times labelled a player who could neither attack nor defend, Traore still managed to spend six seasons at Liverpool, a spell broken up by a year on loan at French side Lens and that included League Cup, FA Cup, and Champions League honours.

The towering Finn is arguably Liverpool's best defender of the Premier League era and in the running for the best ever Liverpool player born outside the British Isles. He grew up supporting Liverpool and spent ten years at Anfield starting in 1999, captaining the Reds for two seasons and anchoring the defence for many more on the way to securing his status as a Liverpool legend.

The Irish defender first played for Liverpool before the Premier League came into existence, being forced out by Graeme Souness in 1991 at a time when clubs could only field four foreign players. He returned in 1998 and played a bit role for two seasons before leaving for Aston Villa on a free.

The Basque playmaker arrived at Liverpool in 2004 as one of the first pieces in Rafa Benitez' Spanish revolution and played a key role in 2005's Champions League victory and 2008-09's attempt on the Premier League title. With an unmatched range of passing and keen positional sense, Alonso made Liverpool tick and remains a fan favourite even after moving on to Real Madrid.

Having been at the club for little more than a month, Coutinho's long term impact is still very much to be written, but the early signs suggest a player who could go down as one of the club's best ever bargains in the transfer market.

Joining up the summer after Liverpool's Champions League success, Reina has never won top honours for Liverpool but for many years was considered a strong contender in any discussion of the club's greatest ever goalkeepers. Inconsistency in recent seasons has dampened such talk, but on his day he remains one of the best in the world at what he does.

Henderson arrived as a big money signing in 2011 but his failure to make an instant impact raised doubts in some quarters. He remains a promising member of Liverpool's squad but his future seemingly remains uncertain.

Redknapp kicked off his Liverpool career by becoming the youngest at the time to play in Europe and towards the end spent a brief spell as captain. In between he established himself as a playmaker and set-piece specialist for Roy Evans and Gerard Houllier, though being labeled one of the "Spice Boys" spoke to a player who could appear more concerned with what happened off the field than on it.

The Finn spent only a season and a half at Liverpool in a journeyman career, his promise undone by injury woes that made it nearly impossible to play even 90 minutes a week. In the end he headed to Ajax with fans wondering what might have been had only he stayed fit.

Despite spending only three seasons at the club, Garcia remains a fan favourite for his integral role in the run to the 2005 Champions League trophy, scoring the winning goals against Juventus and Chelsea in the quarter- and semi-finals that took Liverpool to Istanbul.

Arbeloa only spent two and a half seasons at Liverpool, but his efforts to shut down Lionel Messi at Camp Nou and role in 2009's title challenge remain fond memories for the player and fans. Soon after a spat with Jamie Carragher, Arbeloa returned to Real Madrid, the club he began his career at.

James' early days saw him share time with Bruce Grobbelaar before eventually establishing himself as first choice. The nickname "Calamity James" and lapses of concentration he blamed on playing too many computer games will be the main remembrance for some, but he also won the League Cup in 1995 and a runners-up medal in the 1996 FA Cup.

Henchoz spent five seasons at Liverpool beginning in 1999, forming a defensive partnership with Sami Hyypia and helping the club to 2001's cup treble. Injuries and the emergence of Jamie Carragher saw his time at the club come to a premature end, but not before he played in over 200 matches.

Smicer spent six seasons at Liverpool, the side he supported as a child, playing a supporting role in 2001's cup treble and 2005's Champions League run. He will be remembered by most fans for his goal against Milan in the 2005 Champions League final before leaving for Bordeaux.