Rodgers: "We Could Have Scored More"

Liverpool were poor from back to front today, but Brendan Rodgers felt that the offensive contingent weren't necessarily to blame for the squad's struggles.

Share All sharing options for: Rodgers: "We Could Have Scored More"

Wherever you end up placing the blame for yesterday--Brendan Rodgers, individual players, the team as a whole, everyone, no-one, leprechauns, etc.--it's inarguable that all performed at a relatively poor level. Setting up a two-man midfield against an opposition that was five strong wasn't necessarily the strongest idea, but the execution by those involved was just as bad, and the defense wasn't much better. Glen Johnson was tired and off the pace all day, Martin Skrtel experienced an Oldham redux, Daniel Agger wasn't convincing, and most of the conversation around Jose Enrique was focused on the amazing new head of hair he sprouted during the week.

And, at least by my recollection, the attacking contingent wasn't much better. Daniel Sturridge couldn't get involved and scuffed a couple of efforts, while the player he linked so well with upon first arriving was less a partner than a distant acquaintance, as Luis Suarez failed to have an influence after being shifted left. His move allowed Philippe Coutinho to play just off Sturridge, but the Brazilian didn't impact the match in any discernible fashion, and while Stewart Downing had another serviceable performance, it didn't lead to any concrete threats.

Yet Rodgers still felt that Liverpool could have had more goals, noting the number of chances they created and how "bright" they were in attack:

"We got it back to 2-1 and were better in the second half, but then conceded another very poor goal. If you concede the goals we conceded today, it's always going to be difficult to win games.

"Offensively we were bright, created chances and could have scored more than one goal, but we didn't defend well enough - and you have to give credit to Southampton as well because they played well."

I don't that this was the case, though. There were very few moments that Liverpool truly seemed to cause a threat, and only one or two--Lucas' lofted pass that Suarez couldn't get on the end of being one--that seemed to just miss. The numbers don't appear to lend much credence to Rodgers' assessment either: 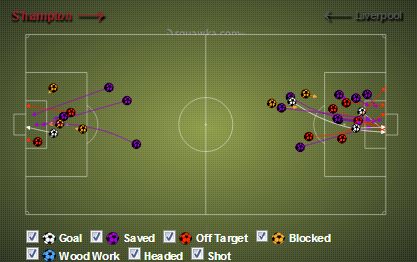 The four saves that Artur Boruc made were are fairly comfortable; he had to do his best work on a close-range effort from Philippe Coutinho, who'd been sent clear on goal by Glen Johnson, but otherwise there weren't many convincing chances created by the visitors. Of the three other shots on goal, none were going to cause any trouble, and just because there's a a handful of blocked shots in the penalty area doesn't mean that any would have found the net.

To say that Liverpool were "bright" in any facet of the game yesterday is an overestimation at best, particularly in a match that felt so painfully familiar--promise of progress in the lead-in with an utterly underwhelming product delivered come kickoff.