As a crucial stretch of matches looms, it's time to examine the depth chart once more.

As we enter a stretch that will see Liverpool play Tottenham, Cardiff City, Manchester City, and Chelsea in a two-week span, the squad's depth is about to be sorely tested. Of course, that's a great time to be without three key starters, but that's exactly the situation that the Brendan Rodgers finds his squad in with injuries to Steven Gerrard, Daniel Sturridge, and Jose Enrique.

Fortunately Coutinho, Joe Allen, and Iago Aspas have returned to health (and to form, at least in the case of Allen), which will help ease the pain of transition for now, but the losses will still sting. Prior to the Gerrard injury, it appeared as though Rodgers was slowly returning to the 4-3-3 he'd favored at Swansea given the personnel available, but now it seems likely that we'll see a shift back to a 4-2-3-1 with Coutinho in the hole behind Suarez with actual wingers around them.

It is also possible that Coutinho will stay wide left, with a three-man midfield featuring some combination of Lucas, Allen, Jordan Henderson, and Luis Alberto. However, with Rodgers so far seeming unwilling to put too much pressure on the young Alberto, it seems like the other three in combination lack the needed creativity to make it work.

How Rodgers deploys his squad in it's current state against Tottenham this weekend will bear close watching. What could be even more interesting, though, is who he chooses to rest and who comes in for them against Cardiff on the 21st; Cardiff is a good enough side to demand respect, but with two vital matches against Manchester City and Chelsea in the next eight days, it would still be a good time to rest some legs and keep the squad fresh.

Note: this was written before Jordan Henderson's injury was known. As his status currently seems to be somewhat up in the air, things are being left as-is. 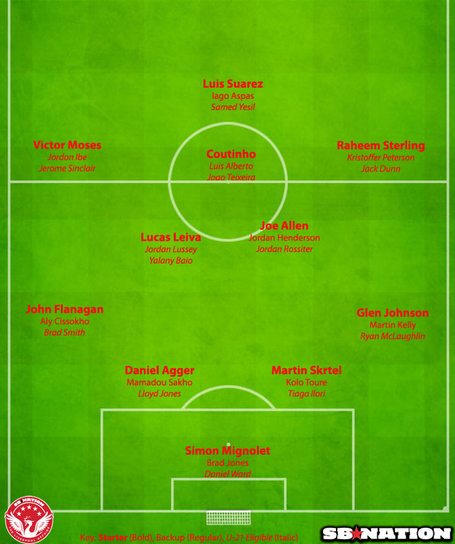