Another month, another look at Liverpool's squad's depth as we run down the 3XI.

November finds Liverpool's roster mostly healthy, though things are still a little muddled in some areas. The status of Steven Gerrard, for starters, is a little up in the air; the captain has a confirmed hip injury, but the severity of it and how long he'll be out for are still unknown. I've left him in for now assuming that his injury won't be long-term, but his status is definitely a big question mark.

Also complicating matters is that while Joe Allen and Martin Kelly have supposedly been deemed fully fit, they haven't been making first-team appearances. Kelly at least has been getting a run in the U-21's, but Allen hasn't even seen that. Gerrard's injury will probably serve to force Brendan Rodgers' hand as far as Allen goes, but Kelly is still quite the mystery. He fit enough to sit the bench on Saturday against Arsenal, but when Glen Johnson was scratched with his mystery infection, John Flanagan was preferred on the right over him.

On the left, Jose Enrique has missed several matches with his lingering knee issues, but should be back soon. This is good, because Aly Cissokho's form has been rough at best. That's not utterly shocking, under the circumstances; Cissokho is coming off an injury, hadn't played much before that, and is still adjusting to a new club and country.

The other interesting situation is at center back. Daniel Agger is aching for games, and both Martin Skrtel and Kolo Toure have been a little inconsistent of late. How that rotation works out will bear careful watching, and is something I'll be expanding on in the near future. 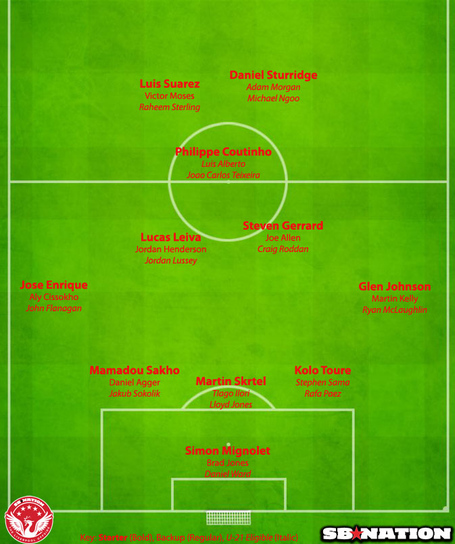