Three Things: A Free-Kick, A Foul, and a Failure

Share All sharing options for: Three Things: A Free-Kick, A Foul, and a Failure

In lieu of deconstructing any of yesterday's goals--none of which were particularly interesting--I figures we could pass the time by rehashing the same points everybody's already been rehashing everywhere else. We came away from yesterday's draw in the Merseyside Derby having learned little about this Liverpool side (like, you have no midfield and can't defend set pieces, WE GET IT), but there were at least a few key moments that we can keep talking about. Or, you know, not. 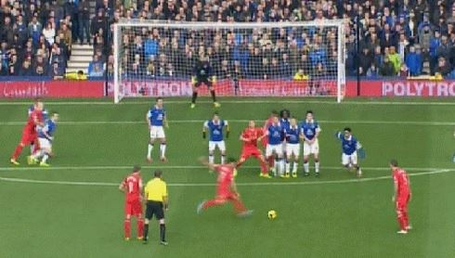 "Everton's wall really should have done better," protest commentators and tacticians everywhere. Well sure, maybe Steven Pienaar shouldn't have left a gap the width of one human between himself and the rest of the Everton wall, but blaming the defense sort of misses the point. This wasn't quite to the level of his stunner against Zenit, and there's certainly a bit of a breakdown for Everton, but goodness Luis Suarez is capable of performing some face-melting magic. He still had to fit a curler between Pienaar and the rest of the wall, still had to apply the power to beat Tim Howard, and still had to do those things perfectly. So yeah, lament Everton's need for improved wall play. You're missing the point and are incapable of admiring nice things, joy-killer. 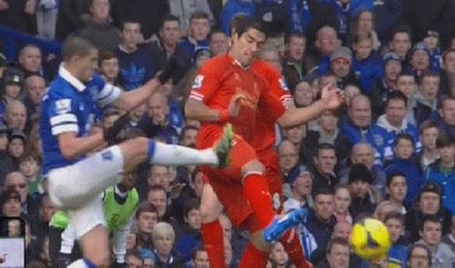 Is this how supporters of other teams feel about Luis Suarez? Because I think I'd very much like it if Kevin Mirallas was sent into space and never seen again. He was at his worst yesterday, making Liverpool's own problem child look angelic by comparison. There's no defending the above moment--a ridiculously awful challenge that very well could have ended the season for Suarez. Wait, what's that? There is some defending it? Take it away, Roberto:

"I have seen the replay and obviously Kevin goes for the ball with a typical striker's tackle and closes his eyes when he gets to the incident and his right leg catches Suarez. I don't think it is a red card because it is not a malicious incident, he tries to win the ball but gets there late. I think a yellow card, bearing in mind the emotions you bring into a derby, was the right decision."

He also notes that had it been against his team he'd have wanted a red card, and that he was disappointed in Steven Gerrard for lifting an arm in the 50/50 aerial challenge that turned out to be much ado about nothing. Anyway, impressively pathetic justification of a tackle that was reckless and malicious, and is an excellent case for retroactive punishment by the Premier League, UEFA, FIFA, Scotland Yard, and most importantly, Bert Macklin. 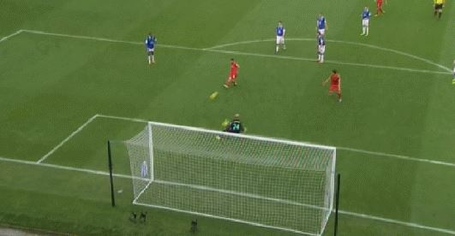 At 2-1 Liverpool should have won the game. At 3-1 Liverpool very well would have gone on to win it, and for many, Joe Allen's catastrophic miss was to blame for the points being shared. I don't count myself among those doing so, but there's no way to escape just how bad Joe Allen's miss was. There's no anger or rage to be had here, only sadness and disappointment for a player who's on his way back to regular first team football. He should have scored, he should have passed, he should have done something. Instead, he missed. Badly. Chin up, Red Panda. It'll get better. Or at least it can't get any worse.