3XI: Well This is a Mess Edition

Between two different formations, a slew of injuries, and inconsistent form, this update of the depth chart is a little... complicated.

Share All sharing options for: 3XI: Well This is a Mess Edition

It's been a rough month. Poor midfield play and a bevy of injuries led to a rough stretch of matches that saw Liverpool draw Swansea before losing to Southampton and Manchester United. On the upside, though, Victor Moses is integrating nicely, Jordan Henderson has been a boss, and hey, Luis Suarez is back. The loss of Philippe Coutinho can't be underestimated, however, and his absence will be felt for the next several weeks until he's back.

For this month's update, I'm bending the rules a little bit, but for good reason. There's several players who look like they're about two weeks out, and while I normally wouldn't include them because of the timing, this time around I am because, well, this graphic looks a whole lot uglier without them. Further complicating matters is the presence of two seemingly-viable formations that Brendan Rodgers can employ in any given match. So this month, you get two shiny graphics, one for Rodgers' traditional 4-2-3-1-ish shape, and another for the 3-5-2 that we've seen the last two matches. 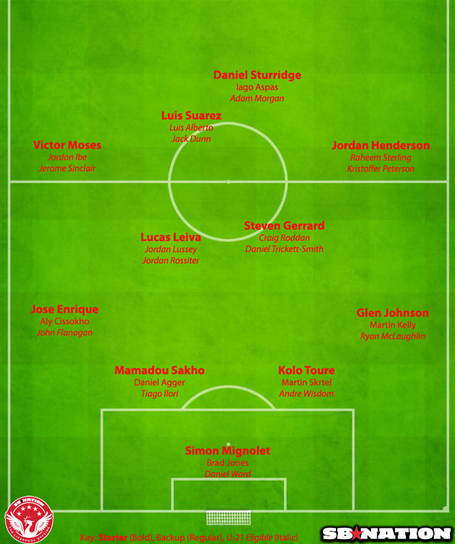 With Joe Allen still out and Henderson needed out wide, the central midfield depth sucks. There's no nicer way to put that, unfortunately. Everything else is looking shiny, especially with Suarez coming back and Glen Johnson, Daniel Agger, and Aly Cissokho returning to health soon. Where things get interesting, though, is in the employment of the 3-5-2 as an alternative solution. 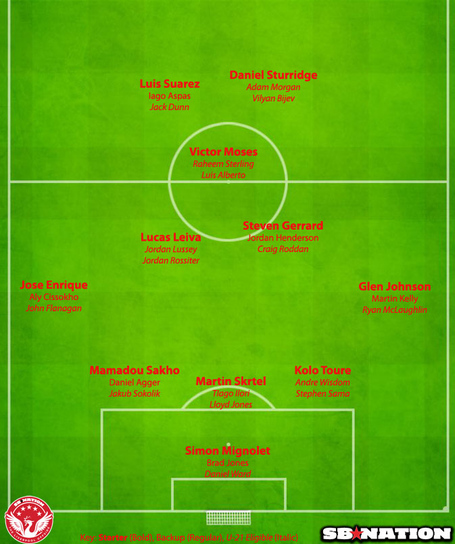 See, that's fun. With Coutinho out, instead of employing a playmaker behind the strikers, those duties fall on a combination of Suarez and Gerrard. That leaves the man behind the strikers (primarily Moses so far, though Sterling could also play this role admirably) in a free role, given licence to move between the lines and make runs at the defense. It's a tactic that I'm personally fond of, as it's wonderfully flexible, allowing a squad to flip from pushing the attack, to sitting on the counter, to an all-out bunker without changing personnel.

Once Johnson returns and reclaims his right back role, that leaves Henderson to move inside and provide depth for the pivot (i.e. let Gerrard rest once in a freaking while). There's ways to make this formation work once Coutinho comes back, but the likelihood is that we see Rodgers head back towards convention once he's back.