With the match just past the sixty minute mark on Sunday and Liverpool full value for their one goal lead against Manchester City, a series of individual errors helped the defending champions draw level on the road. Pepe Reina and Martin Kelly were obvious culprits, but Liverpool's problems started further up the pitch and well before the ball was whipped into the box…

Following an extended spell of possession for City, with Roberto Mancini's side responding positively to the replacement of Mario Balotelli with Eden Dzeko, Joe Allen nips in on Carlos Tevez from behind and steals the ball off the City striker (1) after he is sent at Liverpool's defence by the substitute. Jonjo Shelvey is nearby to pick up the loose ball and immediately passes it up the pitch to Steven Gerrard (2). 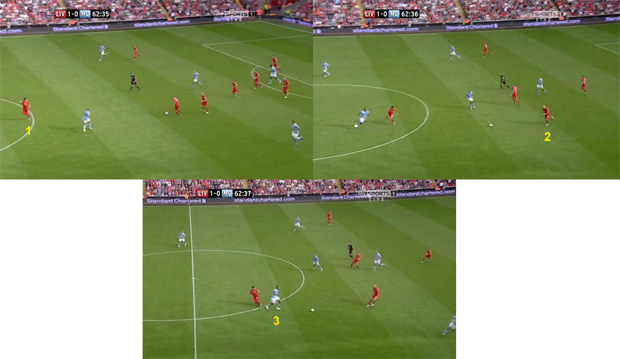 For the second week in a row, Steven Gerrard has the lowest pass completion rate of any of Liverpool's starters, dropping to 78% after hitting 82% in a sloppy performance against West Bromwich Albion. Now he attempts to play an ambitious ball into space for Luis Suarez (1), who is lurking near City centre back Vincent Kompany and would be clear on Joe Hart with a well hit ball over the top. Gerrard, however, attempts a reverse pass that is severely underhit—and given the direction Gerrard is moving and the nature of his attempted pass, it is unlikely it could be otherwise. Despite Shelvey's (2) best efforts to catch up to the ball and Suarez' to change direction, the only player ever likely to reach the pass is Kompany (3), who easily steps up and picks it off. 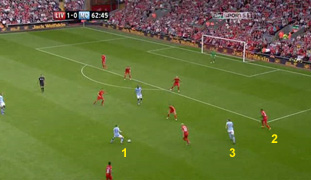 Kompany pushes the ball back into the attacking third to Eden Dzeko, who in turn passes to James Milner (1). As Milner prepares to play the ball to Tevez in space on the right (out of shot), Glen Johnson (2) has little choice but to track Dzeko (3) as he drives towards goal. 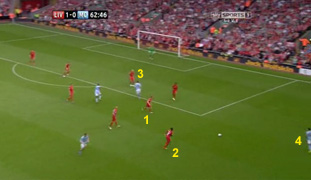 Joe Allen (1) and Raheem Sterling (2) both track the ball as it heads wide, but at the last second Allen checks his run and remains central. Meanwhile, with only two City attackers in the box, Johnson has handed Dzeko off to Martin Skrtel (3). However, with Allen appearing to vacate his place in the middle of the park a split-second earlier to close down the unmarked Tevez (4), Johnson remains central. The end result is that neither player is in any position to attempt to close down Tevez, leaving the job to Raheem Sterling. It is hardly a surprise when the diminutive, 17-year-old winger is bested by Tevez.

Reina commits to blocking the cross but misses completely. The ball is in his six-yard box at the time and given its flat trajectory, any Premier League goalkeeper should be able to deal with its threat. Reina doesn't, and it leaves him stranded.

Martin Kelly appears to be taken by surprise when the ball comes to him, and his attempt to control it on the edge of Liverpool's six-yard box is disastrous as the ball ricochets heavily off his thigh. He may have expected Reina to reach the cross, but under no pressure from any City attacker from the moment the ball left Tevez' boot there is no excuse for his unpreparedness. As a result of Reina's poor attempt to reach the cross and Kelly's poor reaction to it reaching him, the ball falls straight to Yaya Toure who finishes past makeshift goalkeeper Sebastian Coates.

In the end, the two biggest culprits were Reina and Kelly, as most watching the match live would have immediately identified. Less obvious live was the role Steven Gerrard's terrible pass selection played in handing the ball back to City. Given he was running at pace towards the right of the pitch, putting any power on a pass back across his body was always a tough ask. As such, looking to send Suarez clear with a driven low ball down the left channel was likely always destined for failure, and a lob over the top would have been far safer, far easier, and far more likely to lead to a Suarez breakaway.

Beyond Liverpool's three most obvious errors, there is also the matter of Allen and Johnson and that at least one of them should have moved to close down Tevez. Though the mistake of neither doing so is well down the list when it comes to contributing factors in the goal, it still is a contributing factor. And in this case, Allen is the more culpable of the two, as Johnson had no choice but to follow the otherwise unmarked Dzeko inside and at the moment he switched him off to Skrtel, Allen looked to be charging to close down Tevez along with Sterling. With Allen appearing to vacate the middle of the pitch, Johnson's decision to remain central after tracking Dzeko into the penalty area was largely sensible, and once Allen checked his run it was too late for Johnson to change direction and have any hope of reaching Tevez in time to assist Sterling.

In any case, the mistakes by Gerrard, Reina, and Kelly are rather clearly the key causes that led to City's first equaliser, and they are all fairly worrying mistakes. Kelly completely shut off while Tevez' cross was sailing into the penalty area, and as a result he was completely unprepared to deal with the ball falling to him when Reina missed it. For a player many still believe will end up at centre back, shutting off like that in the box can never be excused, even if his age and relative inexperience are cause to hope that he can learn from it. For Pepe Reina, meanwhile, it was another stumble after back to back seasons that have seen him in the worst form of his Liverpool career. And for Gerrard, it was yet another case of the player trying for the spectacular and instead having things backfire spectacularly.