This morning I'm fighting an exceptionally aggressive hangover--we spent much of the pre- and post-match drinking with Not Too Xabi, and while it was a terrific time, I floated to breakfast this morning and gradually realized that I'm coping with a headache-buzzed-dissociative hybrid beast.

But we also went to Fenway and watched the match, so here are a few random thoughts about the experience, as well as a few pictures from the night. All in all, it was a fantastic time despite the result (and in some cases, the performance), and one that I'll remember for a long time. Except for the parts late in the night I don't remember.

** The area around Fenway prior to the match was pretty phenomenal. Most have seen the pictures of the replica gates that were put up--those were positioned on both ends of Yawkey Way in between the stadium and the club shop, and on the club shop building there was also an altered "This is Fenway" sign that was fairly large. 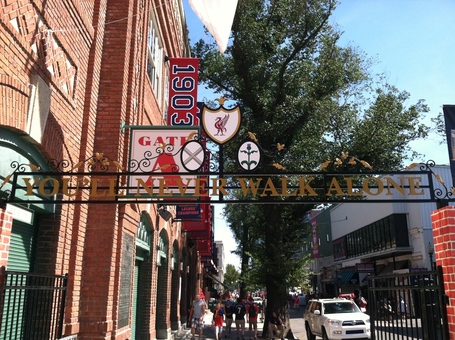 ** There was a clear Liverpool majority around the park and the bars ahead of kickoff, but gradually we saw more and more Roma supporters and jerseys. We nestled in to a bar about a quarter mile or so from the park and ran through plenty of beers, focusing mostly on how good Maxi was at Fulham and how Liverpool just offloaded two of their major goalscoring threats from the past two season. So we were mostly just depressed, but we managed sneak the whiskey away from my buddy's wife to get a solid buzz before we went into the park.

** Fenway was pretty well packed, with a few empty seats prior to the national anthem. After the match started pretty much everyone remained standing--from where we sat at midfield all the way around to the Fenway Kop, standing was the norm. Unfortunately for the atmosphere there wasn't much besides the standing, aside from the PA blasting You'll Never Walk Alone at the start. We heard some random chants throughout the match, but apart from a few moments late in the match when Liverpool pressed, it was pretty cerebral.

** That wasn't true for an older gentleman sitting across the aisle, however, who took the time in the 15th minute to confront the guy sitting in front of us. On the whole everyone was really cordial and seemed to celebrate the occasion and the opportunity to connect, but he was more concerned with whether or not the single in front of us was going to ever sit. Fair question, I suppose, and seeing the match was sort of the point. But as I mentioned, standing was the norm, and the manner in which he went about it--raised voice, close quarters, smelling of onions--probably could have been different. We had a conversation about how normal people address one another like human beings, and it was pretty much the last time we heard from him.

** The guys sitting next to my wife were solid enough, except for the Roma supporter who frequently flipped off Liverpool players, coaches, supporters, etc., and loudly proclaimed that he hated Liverpool more than anything. Joke was on him for paying to get in, I guess, but also on us when he revealed that he was actually a Milan supporter. But still knew all the Roma songs. He did a great job convincing us that Liverpool were shit, even after I told him that objectively speaking, Liverpool were shit. Which he disagreed with. Or something. 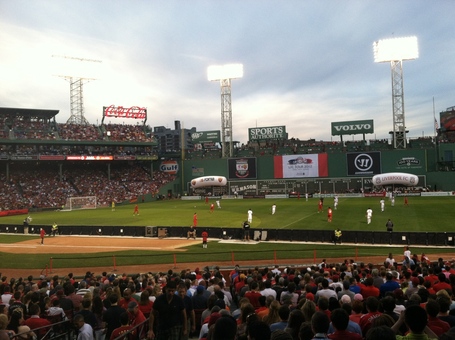 ** As for the actual match, I don't know that there's much to add that Noel didn't touch on--Jonjo Shelvey was very, very good for the time that he was on the pitch. Others have noted how big he looks, and I'd be shocked if he hasn't gained a few pounds. He's solid physically, though, and he was impressive in tight situations with the ball. Should have scored, but doesn't take away from a good showing. Alberto Aquilani was scary casual and had some good touches, and we were excited to see Raheem Sterling on the near side do lots of pressing. The extended look at Suso was nice as well despite not being as effective as his run-out against Toronto, and the return of Daniel Agger alongside Martin Skrtel was fantastic.

** On the flip side I thought Joe Cole and Jose Enrique were abysmal in the first half, with the latter looking as though he couldn't be bothered to do much. That it was a friendly might assuage some concerns, but it certainly didn't do anything to reassure us after how he finished last season. Cole was just a non-entity, with hands on hips for most stoppages in play and generally ineffective play. And while it might not have had much to do with them, neither of Adam Morgan or Nathan Eccleston asserted themselves during their cameos.

** Michael Bradley got huge cheers from the crowd for the goal, and I thought the Roma supporters were much more vocal than Liverpool's. That doesn't really mean anything, but for a match that had so much hype on the Liverpool end of things, I was a little surprised that the crowd seemed more pro-Roma. Again, we weren't situated in the thick of the Liverpool end, so it might have been different.

** Post-match was excellent, with a large number of folks sticking around and hopping from bar to bar. We settled on a place off the main strip and drank, a lot, and talked again about how things aren't very promising at the current moment. There's depth needed, and those who are sticking around will need to be on form and fitness if Liverpool are going to make progress. Also, standard jokes about Charlie Adam being the Scottish Xavi and Joe Cole being the English Joe Cole. Frightening stuff.

But depressing drunken conversation aside, it was an experience and a trip that I'll remember very fondly--a chance to spend time with my wife without our son (whom we love very much, but you know, time away), with friends we don't nearly often enough, to connect with a regular from around here (which reminded me of just how long I've been doing this and how important this blog has become to me), and to see Liverpool Football Club in person.

Hope those who had a chance to get to Boston and Fenway experienced it similarly, and thanks to Noel for carrying the bulk of the workload while I drunkenly stumbled across the nation. Back for normal service soon.