A Day With Liverpool in Boston

Share All sharing options for: A Day With Liverpool in Boston

After a particularly turbulent red-eye from San Francisco to Boston, six tiny cups of coffee, and a pastrami, egg, and cheese scramble, we made our way over to Harvard in hopes that we'd catch some part of Liverpool training--the club hasn't done a particularly wonderful job of getting the information out there regarding times and access, so we mostly headed up to Cambridge blindly.

Thankfully it turned out that training was in full swing and, save for an area with bleachers inside the fence, it was open access, with most of the action taking place on the main pitch and a collection of the English Euro squad members, Fabio Borini, and a few others on an auxiliary pitch. Their training was light enough, with a pass-move-finish drill taking up most of their time. 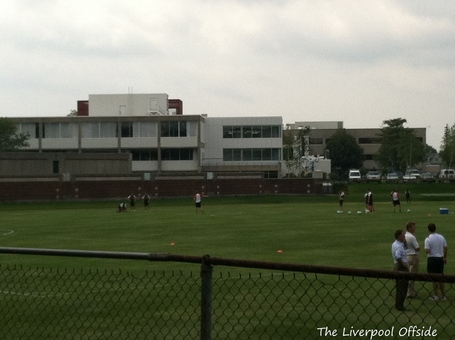 Most of the crowd hung around this part of the training, as it was far more visible--there's a higher bank that allowed you to see over the fence--and had the more recognizable bunch. The crowd was fairly engaged and gave some cheers that were loud enough, mostly for Steven Gerrard and Fabio Borini, the latter of whom had by far the best finish of the practice with a well-taken side volley. 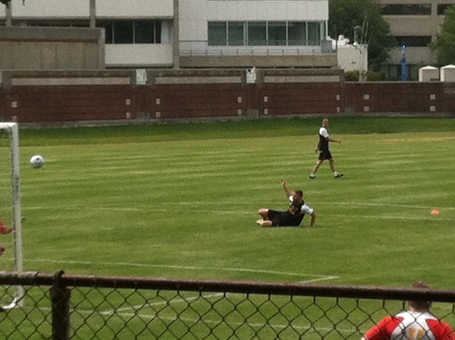 There was the predictable rush to the exit as training wrapped up, and while it was disappointing (but more than understandable, at least for Carroll) to see Andy Carroll, Glen Johnson, Martin Kelly, and Stewart Downing blow past the supporters, plenty of the other squad members stuck around to sign autographs and take pictures. Jordan Henderson and Steven Gerrard were particularly gracious, with both going out of their way to cover the three different sections of supporters.

After seeing the last of the players make their exit we headed through Cambridge and the Harvard campus, ducking into a basement bar for an afternoon taste and exploring random buildings in the area. From there we headed back to the hotel for a rest, with plans to get down to Fenway in the late afternoon to pick up some gear that a friend had ordered, with her relative being the one that got a good amount of our trip settled.

Getting there and waiting in the ticket office was surreal enough, with the Red Sox World Series trophies hanging out around the corner and some important looking people walking briskly past. Our person finally came in, floating a benign-seeming offer to see the field. We expected to get an office or club-level view of Fenway, which, for someone who spent much of his life playing baseball, was more than enough. 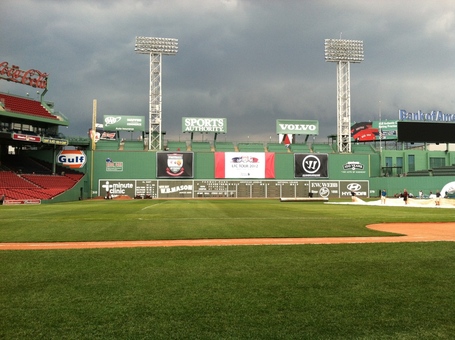 And obviously it turned out to be much more than that, with the opportunity to walk around the pitch, take some pictures from just off the spot where home plate would be, and an offer to take in a training session later in the evening that we previously had no idea existed. The trip had been pretty terrific to this point, but this put things over the top. 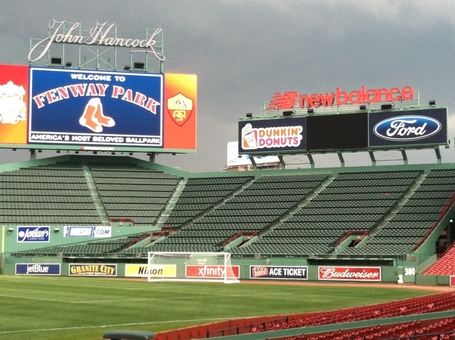 We sat out a brief thunderstorm in the official club store (with kits costing $100, enjoy!) before heading to Cask & Flagon to meet up with site and Twitter favorite Not too Xabi. A few beers later it was nearly time for the evening session, which was back on after the storm gave way to a sunny evening. 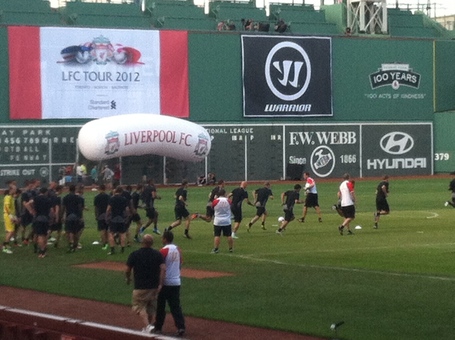 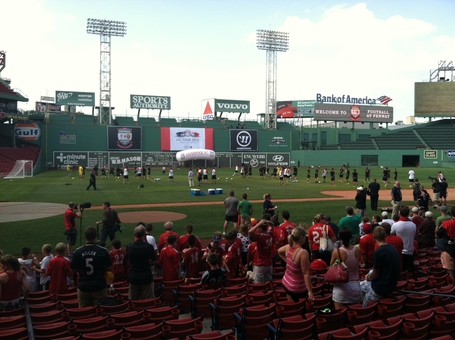 The training session turned out to be mostly an opportunity to get the new away kits broken in and supporters to have another crack at getting autographs. There was some sort of ceremony down the right field line, but it didn't seem like anyone was paying attention, and nobody really had a clue what its purpose was. Some spontaneous singing and chanting broke out as training ended, and the squad gradually filed over to again give autographs and take pictures. 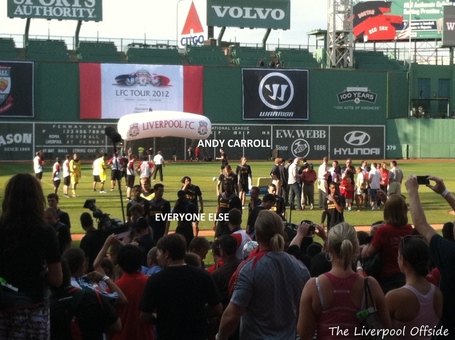 Most noteworthy during this space of time was that Andy Carroll stayed behind for awhile, either for extra work, avoiding the obvious questions, or both. At the earlier session at Harvard there were a few folks that shouted "why are you here?" or something similar, and for a player who's had to answer so many questions since coming to Liverpool, it'd make some sense if a normal meet and greet would feel like anything but. He eventually did come over and treated supporters very well, and the players made their way down the line before heading in through the dugout. Nice moment when Brendan Rodgers, who was cheered loudly every time he came near the stands, made his way out to the centerfield Bleacher Bar to say hello to the supporters seated there

All in all it was a great day, with a few unexpected surprises that gave us a chance to enjoy the experience even more. Folks seemed in good spirits, and there were Liverpool shirts in nearly every part of Boston we explored. Looking forward to tonight--at minimum it promises plenty of beer with NTX, a terrific atmosphere, and a chance to see Liverpool play football.