After spending last summer's transfer window bringing in players who could create chances, Liverpool spent much of last season unable to convert their chances into goals. Now Liverpool need help finishing; that much, at least, seems clear. And with 17 goals last season as joint fourth scorer in the Premier League, many have greeted rumours that the club has targeted Fulham's Clint Dempsey on the transfer market with suggestions that the player would provide goalscoring salvation. Scratching beneath the surface suggests any such hopes are misplaced.

Dempsey may have scored a lot of goals in 2011-12, but his finishing rate was low—in fact it was the lowest amongst last season's top scorers in the Premier League, and he was the only top ten goalscorer to finish below 10%. Some will inevitably suggest that talented players from less talented sides can shine when surrounded by better teammates, but it's just as easy to think that going from being a big fish in a small pond to a minnow in a swimming pool will deprive a player who was the previously the centrepiece in attack of countless additional opportunities to impress.

For now, all we have to go on when it comes to Clint Dempsey is the evidence provided from his time alongside the players he did play with at the club he did play for. And put next to a belief shared by many who've watched him play for Fulham that he's a player who can at times be wasteful in front of goal, that evidence suggests that whether or not he would be good for Liverpool in other ways, the last thing anybody should be thinking is that Dempsey would solve the club's goalscoring woes. 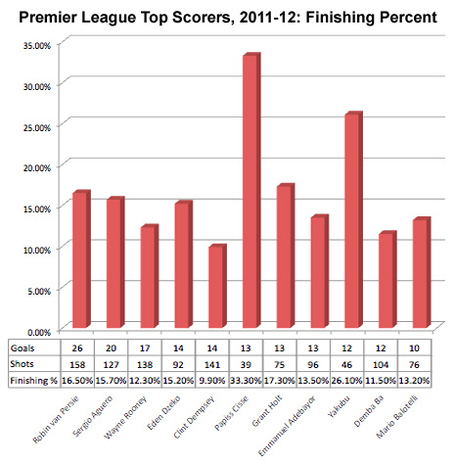 Papiss Cisse and Yakubu might have trouble ever again firing at the kind of rates they hit last year, but looking past their outlying numbers shows that most of last season's top scorers from open play—with penalties and free kicks taken out of the equation entirely—fall in the mid-teens. Except, of course, for Dempsey, who comes in just short of double figures at 9.9%. This might seem like an outlier in the other direction at first glance, but it actually represents Dempsey's best ever conversion rate in the Premier League and a significant step up over 2009-10 and 2010-11, when he clocked in at 5.6% and 7.6% respectively.

Liverpool might have had trouble finding the net last season—with an 8.2% conversion rate, Luis Suarez certainly did—but Clint Dempsey has always been the sort of player who needs between ten and twenty shots to score a goal. History suggests that whatever else he may bring to a side, if he does arrive he won't be the man to solve Liverpool's problems in front of goal.

Note: Goal and shot totals are from open play only.