England fight back to get the win in Kiev over Sweden, scoring two goals in the second half after throwing away yet another 1-0 lead. There was little predicting it after the Swedes took the lead, but Roy Hodgson's squad somehow managed a comeback that was so inconsistent with both the man and his squad that there's nothing left but to enjoy how often football manages to knock you completely on your ass.

Hodgson opted for a small alteration in his starting eleven against Sweden---it didn't necessarily make England any more attack-minded, but the pairing of Andy Carroll and Danny Welbeck gave England a more physical presence up top to go with the lithe Welbeck, with Ashley Young shifting to the left and James Milner continuing on the right. The lack of changes in the rest of the side meant that Liverpool had three players in the starting eleven, as Steven Gerrard and Glen Johnson kept their spots in central midfield and at right back, respectively.

And, consistent with what you'd expect from a Roy Hodgson side, the opening was slow-paced and cautious, with a few breaks for either side but much of the action taking place in the middle third. Each side had a share of half-chances, and a missed header from Welbeck proved about as much as the opening minutes would offer.

With Andy Carroll working hard up front to no avail, it seemed that with a bit of service England would have a chance to break through, and just after the twenty minute mark Steven Gerrard provided it. From ten yards into the Swedish half, Gerrard threaded a curling ball perfectly for an onrushing Carroll, who beat both markers to head in England's opener. It was the type of stuff we saw glimpses of this past season for Liverpool, with Gerrard providing the service and Carroll the steel. England protected their lead well from their and didn't completely retreat, but if you were familiar at all with Roy Hodgson's Liverpool, you knew what was coming.

Just as you knew what you'd get starting the first, the second was exactly what you'd expect from a Hodgson side with the lead. No pressure, clearing from their own half, and panicked in possession. That was just the first three minutes, and in the fourth, the Swedes had an equalizer after a silly foul from Andy Carroll.

Zlatan Ibrahimovic's free kick from twenty-five yards was deflected off the wall, but the forward followed it up and tried to push it through a cluster of bodies. It only got as far as Olof Mellberg on the right side, but the defender was unmarked, and managed to beat Joe Hart with a left-footed effort, with Glen Johnson racing back to try to clear. In the end Johnson could only manage to kick it into his own net, and Sweden were back level. 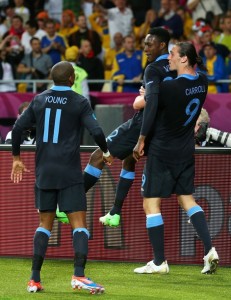 They took the lead through Mellberg ten minutes later, this time as the result of some catastrophic set-piece defending from England. A deep free kick from Sweden found a cluster of free yellow shirts at the back post, and Mellberg headed down and past Hart back across goal. Glen Johnson looked to be at fault initially, as he was the only defender actually defending, but on replay you could see Ashley Cole completely checked out on the edge of the England penalty area. Either way, England continued their impotence when scoring first, this time managing to completely piss it away and find themselves down a goal.

And then everything got ridiculous. Theo Walcott came on for James Milner, which wasn't ridiculous, since running in a straight line with the ball as fast as one can is still more effective than being James Milner. The ridiculous came first when Walcott thumped home an effort from distance (that looked deflected) after an England corner, and then when England took the lead through Danny Welbeck, who back-heeled a volley past Andreas Isaksson for the lead. Whether or not he meant it, it was an amazing goal, and one that proved to be the difference in giving England all three points.

It's hard to explain what happened for most of the second half, at least after Sweden got their first goal. The second wasn't as much of a surprise (and neither was Zlatan Ibrahimovic telling Joe Hart to fuck off, because, Zlatan), I guess, but what followed---as I mentioned above---was ridiculous given the combination of England's hallowed frailty in major competition and Roy Hodgson's pedigree.

In the end I suppose it really came down to the introduction of Theo Walcott, who was the perfect fit for an England side that was lacking someone direct, fast, and just dumb enough to drive his side forward. His attempt from range for the England equalizer is completely dissonant with what we've expected from him, and the work to set up Danny Welbeck for the winner was terrific.

For us, though, most of the attention was paid to the three Liverpool men that played all ninety minutes, and to a man they had very good performances. In the cases of Andy Carroll and Steven Gerrard it was a cut above, as their work throughout the match was unrivaled, and the connection for the winner perfection. Johnson wasn't bad, and again provided plenty on both ends of the pitch, but on a few occasions he found himself caught out, particularly after Walcott came on.

The win puts England in a fairly comfortable spot, with only a draw needed against the Ukraine for qualification. Given how they looked today against France that doesn't seem a tall task, but with only a point separating them from England and France, the co-hosts won't be too down about their chances.

Back tomorrow with some actual Liverpool news to go along with the first day of the final round of group play. In the meantime, enjoy the Liverpool connection that got England on their way (at least until it's deleted):