Liverpool 4, Chelsea 1: Going Out in Style

Share All sharing options for: Liverpool 4, Chelsea 1: Going Out in Style

Liverpool breeze past a lifeless Chelsea, scoring three first half goals and four for the first time in a league match all season. Chelsea's performance left little doubt as to the outcome, doing more than their share to help Liverpool along the way to one of their only dominant home displays of the season. It'd have been nice if it meant more, but let's just enjoy an easy win and a chance to say farewell to the struggles Liverpool experienced at Anfield this season.

I will say, though, that regardless of the outcome, there's no ignoring that the team sheet today was maddening. Jamie Carragher started, Sebastian Coates was on the bench, Fabio Aurelio was omitted completely, and Martin Skrtel shunted left with Daniel Agger in the fullback role. That Coates missed out on what seemed a sure start was bad enough, but the absence of Aurelio in what was his final match at Anfield was disappointing. Odds are he was injured or picked up a knock, but it made for a sad ending to his Liverpool career. Similarly upsetting was the start for Stewart Downing in favor of Dirk Kuyt, who, depending on what you believe, is in his final days on Merseyside. Bits of optimism further forward, though, with Jonjo Shelvey and Jordan Henderson partnering in central midfield, Maxi back in the eleven, and Andy Carroll partnering Luis Suarez in attack.

Any pre-match disappointment would quickly wash away, however, with Liverpool on the sort of form that we've witnessed far too infrequently this season and Chelsea completely disregulated, particularly at the back. It was a chippy match from the start, with Kevin Friend blowing the whistle nearly every change of possession and Paulo Ferreira booked for his second nasty challenge of the early going.

Liverpool looked the better side but it was the visitors who would get the best chance of the opening twenty minutes, with Branislav Ivanovic heading off the post after no less than three Liverpool defenders hit the deck. Minutes later Liverpool got the opener, however, with Luis Suarez jinking down the left side of the Chelsea defense, nutmegging John Terry for the second time in the match, and forcing a cross off Michael Essien's leg and into goal. 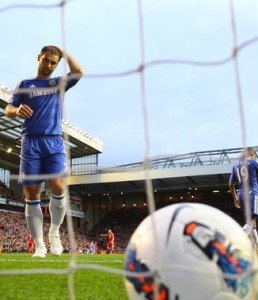 From there it was easy going for the hosts, with Terry having a torrid time, first getting a yellow after getting nutmegged by Andy Carroll on the break, and then slipping to free Jordan Henderson as the young midfielder drove through on goal to give Liverpool a 2-0 lead. And it was Terry (and Fernando Torres) again at fault for Liverpool's third, as he lost Carroll at the back post, allowing the forward to push a header across the goal to an unmarked Daniel Agger, who easily nodded home for the third. Torres hit the bar just under ten minutes after Agger's goal, but Chelsea wouldn't come any closer until the second half. It should have been four prior to the break after Ivanovic was rightly whistled for an elbow into Carroll's chest, but Stewart Downing hit the post on the resulting spot kick.

Chelsea got one back five minutes after the restart, with more diabolical set-piece defending from Liverpool and Florent Malouda's free-kick ricocheting off Ramires and Pepe Reina and into the Liverpool goal. The worry from there was that Chelsea would somehow claw back into the match, but with a Ross Turnbull error leading to Jonjo Shelvey's well-taken strike from distance for his first Premier League goal, Liverpool were left to see out the match in style. Pepe Reina made a terrific reaction save on a Romelu Lukaku, and late appearances would follow for Dirk Kuyt and Raheem Sterling as Liverpool coasted.

There's no denying that Chelsea were probably as poor defensively as they've been all season, and John Terry was directly responsible in some way for each of Liverpool's first three goals. There's also no denying that Chelsea won when it counted---today was nice, and it was Liverpool's third win over the London side in four matches this season, but today doesn't make up for the missed opportunity at the weekend, with a result today that would have been gladly traded for a piece of silverware at the weekend.

So those things don't exactly leave Liverpool covered in glory, but that's about as much negativity as I'm willing to entertain. The hosts were more driven and committed, and even as bad as Chelsea were in defense, Liverpool were far and away the better side for nearly all of the ninety-odd minutes played tonight.

Andy Carroll continued his improved form up front and proved a good foil to the movement and creativity of Luis Suarez, with Jonjo Shelvey and Jordan Henderson more than serviceable through the midfield. We even saw flashes of confidence from Stewart Downing on the flanks, and Maxi again showed why he's worth keeping around, as his movement and positioning kept Liverpool ticking along in the forward areas. And while I stand by my complaints in the pre-match about the omissions of Coates and Aurelio, the back four was solid on a night that they were rarely challenged.

There's no illusions about what tonight represented---a nice show of character from a side with nothing left to play for, but not something that glosses over any of the struggles from earlier in the season. If anything, and it's regrettable if it turns out this way, tonight was a nice way to say farewell to two of the club's classier players, with both Maxi and Dirk Kuyt saying what seemed like more permanent goodbyes.

So a nice win tonight, with only one left until the summer. That wouldn't be such a promising prospect had there been more nights like this all season.