Chelsea 2, Liverpool 1: The Season in a Heartbreaking Nutshell

Share All sharing options for: Chelsea 2, Liverpool 1: The Season in a Heartbreaking Nutshell

Chelsea take advantage of a lackluster Liverpool in the opening hour and hang on late to win the first of their two cup finals. Liverpool were as good late as they were horrible early, and while the influence of Andy Carroll and general urgency saved a little bit of pride, their late improvements serve mostly as a damning indictment of a club that, while content to talk about progress, made many of the same mistakes from top to bottom that we've seen all season. When it was all on the line, Liverpool couldn't adjust, and that has to be addressed in the coming months.

One of the biggest concerns heading into today focused on the back line, but those worries were assuaged when the first-choice back line of Glen Johnson, Martin Skrtel, Daniel Agger, and Jose Enrique was announced, with Jamie Carragher on the bench and order seemingly restored. Further forward Stewart Downing got the start over Dirk Kuyt and Maxi, both of whom were on the bench with Craig Bellamy preferred to support Luis Suarez from the wide areas. Jay Spearing, Jordan Henderson, and Steven Gerrard rounded out the Liverpool eleven in a formation that looked to start in a similar style as what we got at Norwich.

It was apparent early that it wouldn't be the case, however, with Gerrard dropping deep to cover for the continually shaky Spearing, and Henderson floating ineffectually throughout. Liverpool were cautious and tentative, and Chelsea matched them with patient play for most of the opening ten minutes. It was sloppy and hesitant, and when we've seen Liverpool come out of the gates that way this season, the results have been resoundingly negative.

So it wasn't much of a surprise when Chelsea took the lead in the 11th minute, with Ramires finishing past Pepe Reina at the near post after a calamity of Liverpool errors. Spearing sloppily gave away possession in the Chelsea half, and after Ramires latched on to Juan Mata's pass, Enrique got caught between two minds and overcommitted, with Ramires skipping past to free himself. It wasn't Reina's finest moment either, as he wasn't set and failed do anything more than watch it deflect off him into the net.

Liverpool responded with a brief spell of pressure, but the rest of the first half settled into an unfortunately familiar pattern, with Kenny Dalglish's side creating little in attack and leaving Luis Suarez completely on his own up front. There was, quite literally, nothing to threaten the Chelsea goal other than Craig Bellamy's volley that was cleared by Branislav Ivanovic just minutes after Ramires' opener. 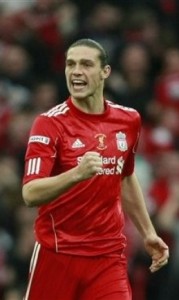 As has so often been the case, though, changes were needed and changes weren't made until Chelsea got what would be the eventual winner. It might be overly harsh or unrealistic to expect a shift at the half, but with Spearing and Downing so poor and Suarez so isolated, it was clear that something else was needed. Jose Enrique was as bad as he's been all year, but with zero cover, a substitution was never likely. Regardless, we got Andy Carroll after Didier Drogba put Chelsea ahead with a left-footed shot that caught Pepe Reina off-guard as it slotted between Martin Skrtel's legs.

For the first few minutes after Carroll's arrival it seemed that little would change, but Liverpool gradually pressed more and more, with the big forward completely taking the match over. His footwork leading up to his goal---which, it has to be noted, was created by a good Stewart Downing tackle---was terrific, and he lashed an unstoppable shot past Cech after leaving John Terry for dead. He lifted the squad and the supporters into life, and for the 25-odd minutes that followed, Liverpool were a totally different team.

It looked like he gave Liverpool the equalizer after a wonderful flowing move, with Steven Gerrard pushing play wide to Glen Johnson, who cut inside and dummied to allow Luis Suarez to pick up possession. The Uruguayan floated a perfect ball to the back post for Carroll, who powered a header on Petr Cech's goal. Whether or not it crossed the line is up for debate, but Cech made a terrific reaction save and pushed it off the bar and back into play. Celebrations quickly turned to disappointment, with neither Phil Dowd nor his linesman on the near side signalling that it completely crossed over.

Liverpool would never recover, and while they continued to press for a second, another chance wouldn't come, with Dalglish and company left to rue an opening hour that condemned their hopes of a domestic cup double.

The excitement and anxiety of the final half-hour is why we watch sport, and why most of us around here are so in love with Liverpool. They're capable of providing moments of unadultered glee, and in a season that's been so difficult, I don't know that any among us are so miserable that they'd deny they were completely captivated by the effort Liverpool put in as the second half came to a close.

But that change certainly doesn't give Liverpool a trophy, and it doesn't even give them any sort of moral victory. Not when they've made the same mistakes so often. Just as nobody would deny their emotional investment as Liverpool searched for the leveler, not a soul who's followed Liverpool with any sort of attention can say they didn't recognize where Liverpool had gone wrong within the opening five minutes. 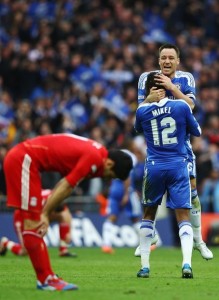 That doesn't take away the emotion of the closing minutes, but it does align the match as a whole with the frustrating narrative that's dominated Liverpool's season---so close so often, but unable to consistently make the types of decisions that give the club their best chance at winning. Their performance for the first sixty minutes of the match was one we've seen far too often, and we know better than to completely attribute it to the opposition, who, as deserving as they might have been, weren't anywhere near their best.

There's certainly positives to be taken, as there typically are, with Andy Carroll leading the line for plaudits and, as noted with so much frustration, the squad as a whole improving late. Carroll was exactly what we've wanted---dominant in the air, confident, technically adept, and able to channel his passion for the good of the squad. He could and should be given starts in the next two, and with much improved form in the past few weeks and months, it's not an overstatement to say that he could have turned his Liverpool career around. And the play late, despite its futility, gave us reason for hope, which is something that hasn't always been the case. Making changes mid-match hasn't been a strong suit for Liverpool this season, but today they did exactly that, nearly to great effect.

Unfortunately there were just as many negatives, both individually and collectively, but there's little need to rehash each and every one. It was clear for all to see where the glaring weakness in the squad and the management are, and while all involved looked to be better late, I'm just as prone to attribute that to Chelsea's retreat.

Nothing left to play for, but two left on the calendar, and hopefully Liverpool can use the second half today to see out the season in similar style, and head into the summer with a clear idea of how to make things better both in the short- and long-term. That we support them through it all makes today, and so much of this season, painful, but they'll be back.

They have to. They're Liverpool.