People can talk about rebuilding. Even if the point of last summer's transfer strategy was to avoid long settling-in periods that would lead to 2011-12 becoming a rebuilding season. Even if it now appears that next season will end up something of a rebuilding season, too, with few entertaining realistic hopes of a return to Champions League action twelve months hence.

They can talk about bad luck and posts. Even if, in the context of an entire season rather than over a stretch of a few games, the idea that nearly every moment of luck across an entire season would go against Liverpool begins to sound faintly ridiculous.

And they can talk about the team missing Lucas. Or about the distraction of Luis Suarez' autumn incident. Or about the focus on cup runs leading to letdowns in the league.

In the end, though, after all the reasons and explanations and excuses for Liverpool's unqualified failure in league play, it will always come back to one inescapable truth: 52 points. With that return, Liverpool ends the 2011-12 season with the worst record the club has managed in the top flight of English football since being demoted in 1954.

Normalising the data to allow a level comparison of every season back to 1962-63, the year Bill Shankly returned the club to the old First Division, puts this season's Liverpool side and the league result they managed in historical perspective. And it's a perspective that rather throws cold water on any effort to wave away the poor results as nothing but a bit of bad luck and rebuilding.

Until yesterday's loss confirmed a new and ignominious record for Liverpool, the worst results came as the club struggled through the 90s. First Graeme Souness led the club to back to back 54 point efforts (normalised). Then, in 1998-99, Gerard Houllier's first year in charge again saw Liverpool earn only 54 points.

Those seeking solace might look to past occasions when Liverpool have finished with 55 or fewer points, as on four of the previous five occasions this has been followed by at least a ten point improvement in the league. Two of those times, however, came shortly after the club returned to the top flight, and the two relatively successful recent seasons following efforts of 55 or fewer points both led to results that would still have seen the club finish worse than fourth in each of the past six years.

Whether Kenny Dalglish, Steve Clarke, and the rest of the current coaching staff are the right men to rebuild from this all time low is an entirely separate question, though one imagines that a prerequisite for any meaningful improvement will be realising that mistakes—some of them quite major—actually have been made. That many of the same problems that were apparent at the beginning of the season remained at the end, and that at times the message emanating from the club matched the belief of some fans that the only problem was settling in and bad bounces, is almost as discouraging as that depressingly inarguable final number: 52.

You don't get to that point by accident, and there's simply no way to spin the result to make it look acceptable. To even try to do so only sets the club up for further failure going forward. 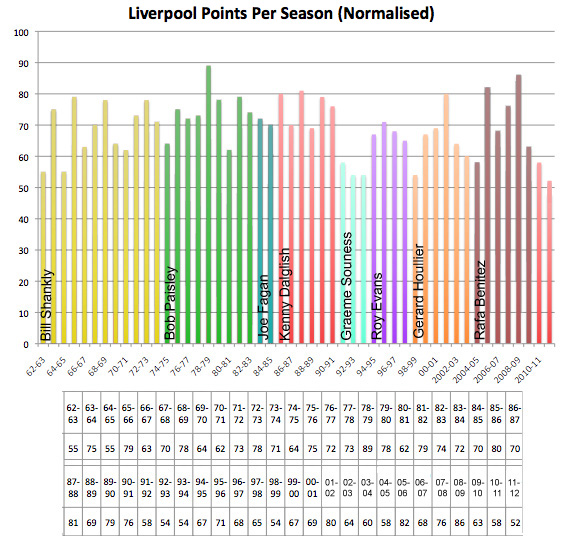