Share All sharing options for: Liverpool 1, Aston Villa 1: An Improvement of Sorts

Liverpool disappoint by dropping more points at Anfield, but with dismal performances in their last two, they managed to create a bit of positive sentiment by showing actual drive and commitment towards getting all three points. There's no moral victory on the day, and Villa did well to stave off the late Liverpool pressure, but at the very least we're left feeling that the club have an interest in turning things around for the run-in.

As has been the case over the past few weeks, the team sheet didn't contain any surprises despite hopes otherwise---the continued exclusion of Sebastian Coates in favor of Jamie Carragher is baffling for every reason that's not sentimental, although it was offset slightly by the revelation that Daniel Agger was fit enough to make the bench. He'd join Andy Carroll there, who would benefit from additional time but was left of the eleven after his struggles last weekend. That left Dirk Kuyt, Luis Suarez, and Stewart Downing in attack, with Jordan Henderson, Steven Gerrard, and Jonjo Shelvey in the midfield. Carragher partnered Martin Skrtel in central defense with Jon Flanagan and Jose Enrique wide, and as expected, Doni came in at goalkeeper for the suspended Pepe Reina.

The early formation was encouraging depite the fact that Skrtel was shunted left to accommodate Carragher, with Shelvey and Henderson setting up deeper in central midfield and Gerrard playing just off Suarez further forward. Downing got things going for Liverpool on the left after a confident knock-on past Alan Hutton, and his low cross skipped past three Villa defenders to Dirk Kuyt at the far post. The Dutchman was at a tight angle but managed to force Given into a save, one that, depending on how generous you are, was close to crossing the line.

And like clockwork, Liverpool concede shortly after, with Doni flailing at a Villa cross and Barry Bannan maintaining possession on the right side of the area. He laid off for the onrushing Chris Herd, who curled one into the far corner to give the guests the lead. Doni could have done better and was under some pressure, but it was a predictable collapse from the hosts. 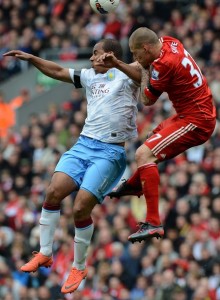 The general malaise that followed was, sadly, just as predictable, as Liverpool were unable to muster any sort of actual response despite the fact that Villa made little effort in attack. They managed a bit more of a threat as the half wound down, first with a Luis Suarez penalty shout turned down by Michael Oliver after Hutton nicked him in the box, and most notably when Dirk Kuyt sent Steven Gerrard's cross/shot over the crossbar from two yards in front of goal.

Liverpool continued to press at the start of the second, as Steven Gerrard started on the right and Kuyt pushed forward to partner Suarez. The move almost paid dividends within ten minutes of the restart, only for Shay Given to clear off the line after a header from Suarez hit the post. It was a sublime ball by Gerrard from deep and a wonderful effort from Suarez, but both were outdone by Given's terrific reflex save.

Waves of Liverpool pressure and possession followed, all of which went unrewarded. Andy Carroll and Craig Bellamy came on to aid the effort in the 65th minute, with Stewart Downing and Jonjo Shelvey headed in the opposite direction. Bellamy got himself immediately involved with a shot from the edge of the area, and Liverpool looked to break a resolute Villa defense.

Maintaining that level of pressure was always a big ask, and for a fifteen minute spell Liverpool looked as though they wouldn't be able to draw level. But a Daniel Agger header off the post was nodded home by Luis Suarez, and it looked like Liverpool had enough confidence to pull off just their second win in eight matches. But for all their late pressure---and another few moments of Liverpool defying all logic by not scoring---they couldn't find a winner, and it was another two points dropped at Anfield.

Relative to the way they performed against Newcastle and Wigan, I suppose what we saw today was an improvement, with something suspiciously close to actual caring working its way into Liverpool's display. It was most evident for large spells of the second half, but even during the first half there were times during which Liverpool were guilty of trying. Today still wasn't good enough, and for a club that's supposed to be a hell of a lot better than they are it's a damning indictment to say "they tried hard" is somehow an improvement, but that's where they are, and an improved commitment for much of the match is at least on the right track. 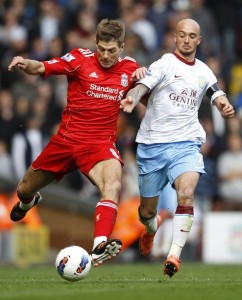 But there's still the glaring shortcomings that were such a big part of Liverpool's inability to get results before they decided to give up, particularly when it comes to finishing chances. The post was hit at least three times and Shay Given made a number of fine saves, and we were left ruing missed opportunities once again. As noted above, though, that's a clear improvement on the past few months, when Liverpool have so often tucked their tail between their legs and watched a match pass them by. We got a glimpse of that immediately after Villa's goal, and while they didn't get three points, they made the changes in approach they needed to.

One of the biggest changes was the relocation of Steven Gerrard, who blistered down the right and delivered a number of threatening crosses. I'm not sure if he's got the legs to stay there for a full ninety minutes, but on today's evidence he should certainly see more time. Jordan Henderson will always draw the ire of a section of fans, and he's inconsistent as hell, although he shone when central again today. If he and Jonjo Shelvey could be molded into one intelligent, timely, daring, confident footballer they'd both be better off.

Suarez was at his active best for much of the day, wriggling past and bowling through the Villa defense on multiple occasions. If it wasn't clear already, today confirmed that he's going to be done no favors by officials, getting remonstrated on two separate occasions for diving when, in fact, neither was a dive. Dirk Kuyt worked hard but couldn't finish a nailed-on chance, and Stewart Downing showed glimpses of daring but had less influence than he'd have hoped for. Appearances for Craig Bellamy and Andy Carroll improved Liverpool in attack, with both getting chances that could have seen Liverpool get the win.

The return of Daniel Agger was a highlight at the back---Martin Skrtel was solid in his less preferred role, and Jon Flanagan had another decent performance, but Jamie Carragher and Jose Enrique were both ineffective and added few positives. In the case of Enrique it's clearly a case of overuse, and for Carragher it's another piece of evidence in the case for Sebastian Coates to see more time. With Agger back, though, it's better luck next season for the promising Uruguayan. Brief mention for Doni, who again probably could have done better on the cross that led to Herd's opener, but he was capable when called upon despite a distinct lack of Villa pressure.

All in all, not an entirely miserable day, and that we can view that as an improvement doesn't say much about how Liverpool have gone about their business in the new year. What we hope for now is a continuation of today's effort into the midweek trip to Blackburn and next Saturday's semi-final at Wembley, and that it's enough to start to turn things around for a more encouraging finish to what's been a disappointing season.